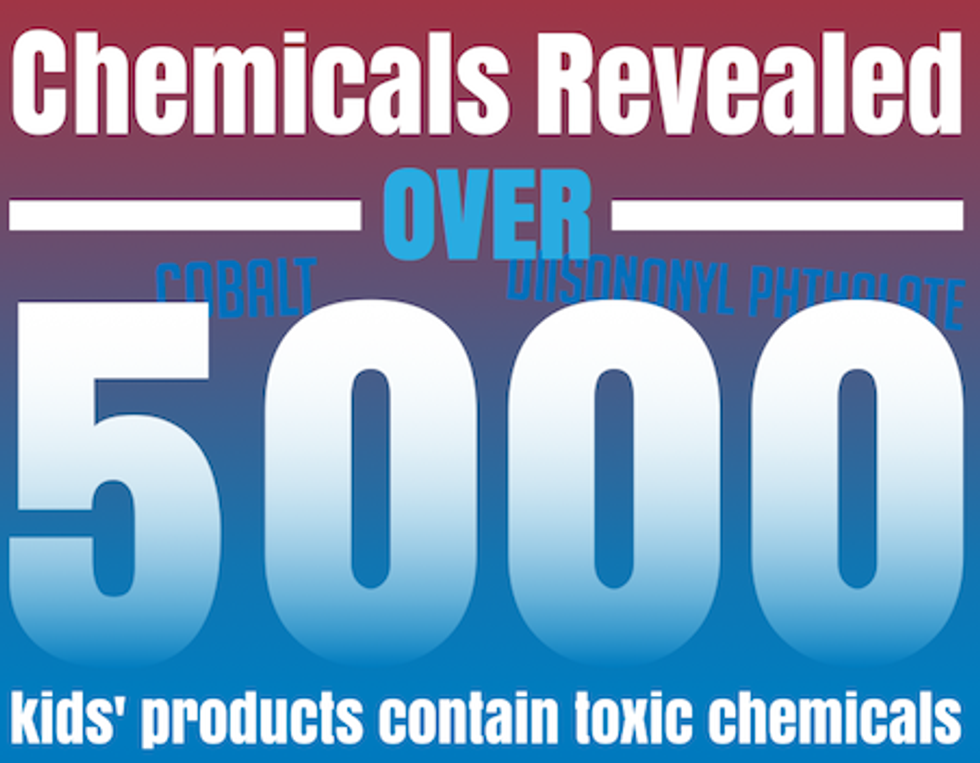 More than 5,000 children’s products contain toxic chemicals linked to cancer, hormone disruption and reproductive problems according to reports filed with the Washington State Department of Ecology. An analysis of the reports by the Washington Toxics Coalition and Safer States found that makers of kids’ products reported using a total of 41 chemicals identified by Washington State Department of Ecology as a concern for children’s health, including toxic metals such as cadmium, mercury and antimony and organic compounds such as phthalates. Major manufacturers who reported using the chemicals in their products include Walmart, Gap, Gymboree, Hallmark and H&M.

Examples of product categories reported to contain toxic chemicals include:

“The data shows store shelves remain full of toxic chemicals that we know are a concern for children’s health,” said Erika Schreder, science director for the Washington Toxics Coalition. “These reports are critical for understanding the presence of toxic chemicals in our homes and the marketplace.”

Major findings from the reports include:

“Too many products contain chemicals that do not belong in items we give our kids. To truly protect children, manufacturers need to identify safer ways to make their products and stop using harmful chemicals,” said Schreder.

A Washington state bill that would have required manufacturers to stop using toxic flame retardants in children’s products and to identify safer ways to make their products failed to pass the legislature before the end of the regular session on April 28. The Toxic-Free Kids and Families Act (HB 1294) was opposed by a coalition led by the American Chemistry Council, Walmart and the Association of Washington Business.

Walmart, a major opponent of the Toxic-Free Kids and Families Act, reported a total of 459 instances of products containing chemicals including arsenic, cadmium, phthalates, bisphenol A (BPA) and mercury.

“It is particularly disturbing to see the large numbers of products reported by Walmart at the same time the company has been working to defeat Washington’s bill that would address some of the most problematic uses,” said Schreder. “Companies like Walmart need to show they’re serious about children’s health by getting toxic chemicals out of their products and supporting common-sense legislation.”

Washington State is the first state to have a comprehensive chemical reporting program. It is considered a model for other states.

“The Washington experience shows these reporting programs can work without being too burdensome on business,” said Sarah Doll, director of Safer States. “At least seven additional states are considering implementing similar programs on the extent of chemical use in children’s products in their state. Critical in these proposals are requirements that companies begin looking at safer ways to make their products and an eventual phase-out of the use of harmful chemicals.”