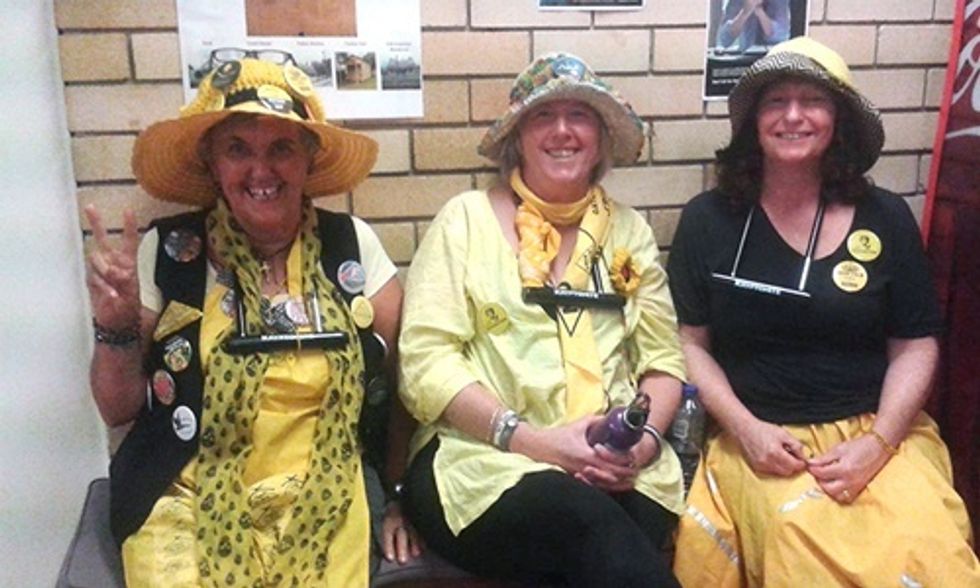 Three women from Knitting Nannas Against Gas, an anti-coal seam gas group, have been arrested after locking themselves by their necks to the gates of a wastewater treatment plant in New South Wales, Australia.

The three women were detained, charged and then released from the Narrabri police station. Photo credit: Facebook

The women—Angela Dalu, 70, Dominique Jacobs, 51, Theresa Mason, 48—chained themselves this morning to the gates of the Santos Leewood Water treatment plant south of Narrabri. The plant is the proposed site of 850 coal seam gas wells.

"The action today has seen three ladies from the Knitting Nannas Against Gas lock themselves to the Santos gates to prevent workers gaining access to the controversial Leewood evaporative ponds," the group posted to its Facebook page. "This is where almost 600 million liters of toxic CSG [coal seam gas] waste is stored. Santos are trying to build a reverse osmosis plant on this site to concentrate the waste and use treated water for neighboring crops."

The Knitting Nannas, who were joined by some 60 other anti-coal seam gas activists, were charged with obstructing traffic and failure to comply with police direction, The Guardian reported. They did not resist arrest, local police said.

The group was formed in June 2012 "in response to a growing awareness of the exploration for unconventionally mined gas in our prime agricultural land," and they "peacefully and productively protest" against unconventional gas and other non-renewable energy projects, the group's website says. The act of knitting is intended to show the group's sense of maternal nurturing, though they said you don't have to be a nanna or knit to join the group.

“I’ve never been involved in protests in my life before the coal seam gas threat came to my home town of Gloucester,” Jacobs, a mother of seven, told The Guardian. “As a mother I cannot stand back and let this destructive industry roll out across our state.”

The group's spokeswoman Letitia Kemister said they would protest “every single day” until the project is stopped. “If we put 850 gas wells into the region, we’re going to have a methane mess,” Kemister said.

Santos's Energy New South Wales manager Peter Mitchley told ABC News the company had "all approvals in place to conduct its work safely and without harm to the environment."

He said the facility has strong support from the people of Narrabri. "More than 85 percent of the landholders within our project are supportive of our work and local community groups including the Narrabri Chamber of Commerce and Yes2Gas have also voiced their support publicly," Mitchley said.

ABC News reported the proposed project has been controversial:

More than 10,000 liters of untreated wastewater leaked from a storage pond built by previous owner Eastern Star Gas in 2011, and exploration by the same owner contaminated an aquifer with uranium.

When Santos took over, it built new storage ponds and has proposed a high-tech reverse osmosis treatment plant at Leewood.

At capacity, the Leewood facility is expected to produce 500 megaliters of concentrated toxic waste liquid but only has storage for 300 megaliters.

The Environmental Protection Authority warned the ponds would be full in three years.