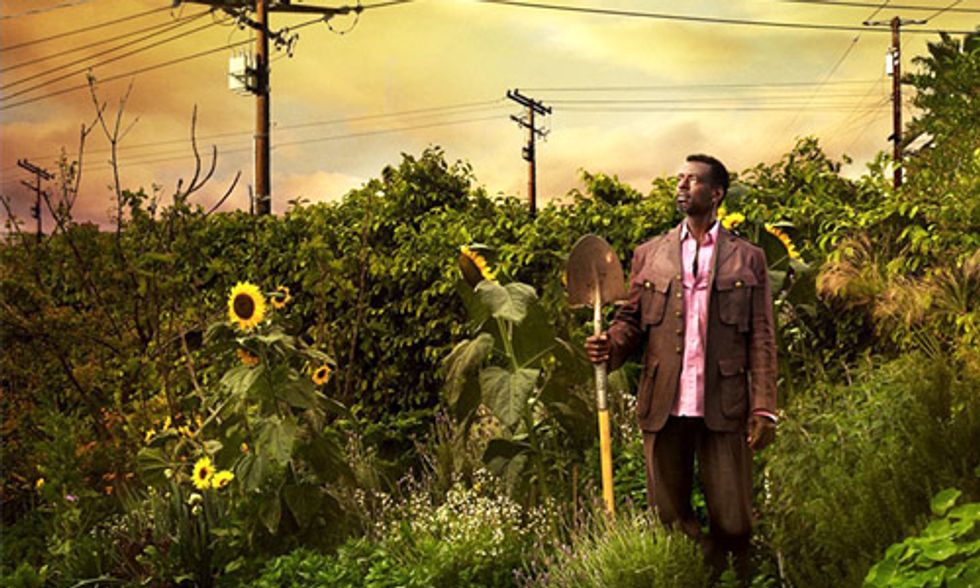 Since 1950, the number of people residing in urban areas has increased by more than 3.1 billion. It is projected by the United Nations (UN) that by 2050, 66 percent of the world's population will be living in cities.

The rise in urban inhabitants has led to growing global concern over a slew of challenges—including food security, land scarcity, social equity and economic opportunity. In response, communities around the world are digging into their urban landscapes and cultivating foodscapes that can provide green space, nutritious food and increased incomes for farmers, while reducing food miles and creating greater community integration and inclusion.

According to the UN Food and Agriculture Organization (FAO), nearly 1 billion people worldwide are now engaged in urban agriculture. From Nairobi, Kenya to Brooklyn, New York farmers and eaters are finding ways to green their cities.

Ron Finley, a noteworthy renegade in the urban agriculture revolution, has been transforming the streets of South LA since 2010. Affectionately known as the Gangsta Gardener, Finley's rebellious introduction into agriculture is explored in the documentary, Can You Dig This. An inspiring story of four unlikely gardeners, the film calls for people in one of America's most notoriously dangerous neighborhoods and beyond, to “put down their guns and pick up their shovels."

Between April 22-29, organizations around the country will host screenings of the film. On April 30, community farms and gardens, in collaboration with Ron Finley and the Can You Dig This team, will celebrate National #PlantSomething Day—a day of action and service that encourages all to get involved in the urban agriculture movement.

In solidarity, Food Tank is highlighting 24 organizations that are helping to green cities around the world.

Abalimi is an urban agriculture and environmental action group located outside of Capetown, South Africa. The organization supports and assists groups and individuals looking to improve their livelihoods through organic farming.

Located just 2.5 miles from the Seattle city center, community members, local institutions and volunteers are coming together to grow a place for education, cultural exchange and recreation. With the multifaceted goal of revitalizing public land, improving public health and increasing local food security, the group is cultivating a number of vegetables, fruits and nuts. Redefining what it means to have access to local, organically grown produce, all food is free for the taking.

A nonprofit in Mexico City, Cultiva Ciudad manages a school garden program and assists at-risk youth in societal reintegration through the teaching of urban gardening skills. Additionally, in collaboration with Centro de Autismo Teletón, they operate a therapeutic sensory garden for children on the autism spectrum. Its education program, pollinator garden, herb spiral and sensory tunnel give children the opportunity to connect with nature.

In Mumbai, Fresh and Local transforms underutilized urban space into edible landscapes. With an emphasis on community integration and organic growing, the organization is advancing India's urban agriculture movement.

Since 2012, a group of farmers have been growing organic produce on a 4,000 square foot rooftop in an industrial neighborhood of Hong Kong. In an effort to rally other urban agriculture supporters, HK Farm frequently curates exhibitions, coordinates community events, leads educational workshops and collaborates with local schools and businesses.

A grassroots organization, Green Grounds educates and supports residents of South LA as they transform their lawns into edible landscapes and urban farms.

Grow Calgary, Canada's largest urban agricultural farm, is operated by a dedicated group of volunteers. With the goal of providing healthy, local food to all Calgarians, the farm's output is donated to a community owned and operated food bank.

Thirty-three meters below London's bustling streets, Growing Underground is using the latest in hydroponic technology to grow pesticide-free produce. In addition to drastically reducing water usage and eliminating the concern of agricultural run-off, this urban endeavor significantly reduces the miles traveled by the city's favorite salad leaves and microgreens.

The Mazingira Institute provides training and support for urban farmers in Nairobi, Kenya. The NGO has trained about three thousand urban farmers and organized youth and women's hubs.

At Mbuyoni Elementary School in Dar es Salaam, Tanzania, the Regent Estate Senior Women's Group has helped to establish a garden that spans one-sixth of the school's land. After early morning tilling and tending, crops are harvested and served for lunch in the school's cafeteria. The project not only addresses malnutrition, but also familiarizes the students with native plants.

An essential component of the International Rescue Committee's greater efforts to help communities build a secure and sustainable future, New Roots provides recently resettled refugees with the training, tools and land necessary to grow fruits and vegetables in their new neighborhoods. Present in 22 cities, this initiative is helping families become self-sufficient across the U.S.

Not Far From the Tree, based in Toronto, Canada, mobilizes a team of volunteers to pick fruit trees when a homeowner can't keep up with the season's bounty. The harvest is then split equally, with one-third offered to the homeowner, one-third to the volunteer and one-third delivered by bicycle to a local shelter, food bank or community kitchen.

19. Our School at Blair Grocery (OSBG)

Located in the Lower Ninth Ward of New Orleans, OSBG is an independent alternative high school and sustainability education center. Coupling GED-prep with the tenets of sustainable community development, they seek to empower “at-risk youth to make New Orleans the (next) City That Ended Hunger."

According to The Urban Food Project, 88,000 Birmingham, Alabama residents live in a food desert. In an effort to provide the community with fresh, local, healthy food, this project assists corner store owners in the buying, marketing and selling of fresh, local produce.

Using permaculture principles, Siyakhana has transformed a once unappealing inner city plot of land into a productive vegetable and medicinal herb garden in Johannesburg, South Africa. Additionally, the organization advocates for improved food policy in the country and offers training and work opportunities to the community's marginalized.

In the outskirts of Sucre, Bolivia, 680 women are now producing pesticide-free vegetables for their families. The remaining produce is sold at market or to a nearby cafe. The association is working toward zero malnutrition and along the way, empowering and uplifting the entire community.

A multicultural and educational urban farm in Vancouver, Canada, The World in a Garden strives to engage the community, particularly youth, in the development of a just and local food system. In an effort to ensure fair food around the world, they are currently piloting projects in Costa Rica and India.

Find an urban agriculture project near you, secure tickets to a Can You Dig This screening or consider hosting a screening at your local theater to join us in celebrating National #PlantSomething Day on April 30.