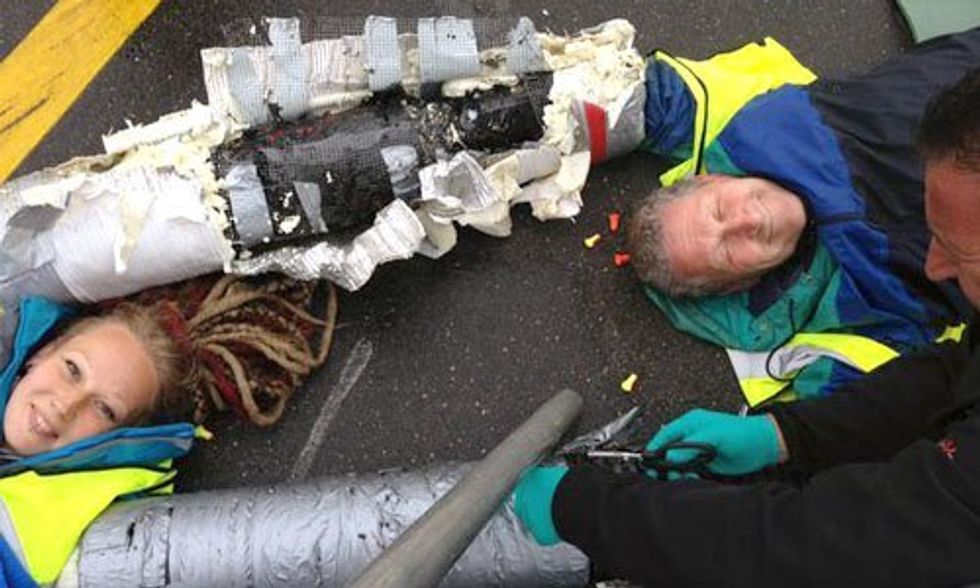 Thirteen activists from the group Plane Stupid chained themselves together on the northern runway at the London Heathrow Airport in England this morning protesting the runway expansion saying, "We cannot meet our climate change targets and build new runways at the same time."

Activists wore armlocks and laid on the runway, where police brought heavy machinery to cut them free, according to the Guardian.

The statement released this morning by Plane Stupid challenged the assumption that expanding Heathrow fits with the UK's climate change goals and argued that "if the aviation industry paid more of its environmental costs then there would be no pressing need for a new runway."

"Building more runways goes against everything we're being told by scientists and experts on climate change," said Ella Gilbert, an activist from Plane Stupid. "This would massively increase carbon emissions exactly when we need to massively reduce them, that's why we're here.

"We want to say sorry to anyone whose day we've ruined, and we're not saying that everybody who wants to fly is a bad person. It's those who fly frequently and unnecessarily who are driving the need for expansion, and we cannot keep ignoring the terrifying consequences of flying like there's no tomorrow. No ifs, no buts, no third runway. And we mean it."

Sarah Shoraka of Plane Stupid told the Guardian that the group re-formed since the release this month of a long-awaited report that recommended a new runway should be built at Heathrow to provide “urgently required” capacity.

“We thought we’d won this fight, because David Cameron said ‘no ifs, no buts’ there would be no runway at Heathrow,” Shoraka told the Guardian. “We thought it was off the table and then the report came through and we thought: ‘We’re going to have to fight this all over again.’”

“We need to insert climate change into the narrative, it’s been absent from the whole debate ever since the report came out,” she said.

According to Plane Stupid, the airport expansion is a terrible idea because: