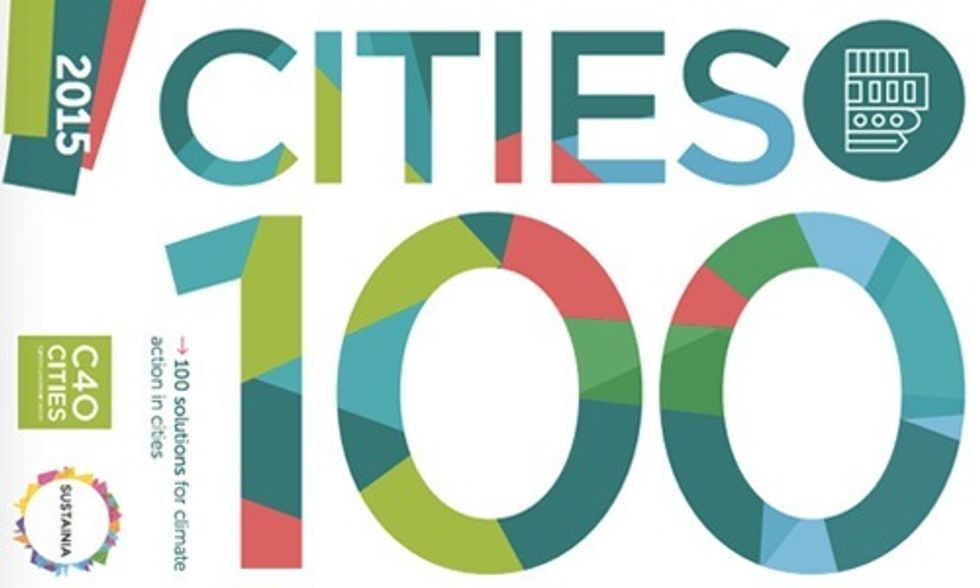 As we approach the UN climate Change Conference, COP21, in Paris this December, the focus will be on national governments to reach a binding global climate deal. But Cities100 is here to remind us that city leaders are not waiting for national level changes. Instead, they are leading the charge against climate change by implementing local solutions to global problems.

As the global discussion on climate change intensifies, cities are leading the way to a sustainable future. And for good reason. By 2050, nearly 70 percent of the world’s population will live in a city. As urban societies continue to expand and change, so too do the challenges facing them, particularly when it comes to climate change. This growing urban population is vulnerable to the impacts of climate change—for example, 90 percent of all urban areas are coastal—but it is also powerful.

Cities have always been centers of commerce, culture and knowledge. Now they are harnessing their innovative, collaborative and progressive nature to take action on climate change, forging a path to a low carbon future that improves the health, wellbeing, and economic opportunities of urban citizens.

In Johannesburg, South Africa, for example, the city is issuing green bonds to finance climate mitigation projects for more than $143 million, enabling them to accelerate the roll out of 42,000 building smart meters, 43,000 solar water heaters and deployment of 152 hybrid buses.

In Milan, a city with one of the highest rates of car ownership in Europe, the “All you can share” mobility system is convincing the city, and the world, that private car ownership is a thing of the past. More than 4,600 bikes are available to be picked up and dropped off at fixed stations, whilst 150 scooters and 2,000 cars—half of which will be electric by the end of 2015, are available throughout the city, accessible through an integrated and easy-to-operate system that users manage via a dedicated smartphone app.

These are just two examples taken from the Cities100 report, published this week, which features 100 leading policy solutions from cities around the world and serves as a guide to civic leaders and planners all over the world seeking to create resilient and productive cities.

Cities100 could not come at a better time, as the world’s leaders gather in Paris this December for the United Nations Climate Change Conference, COP21. While the hope is that nations will reach a binding deal, the 100 city solutions presented in this publication remind us that cities can and do take meaningful action at the local level. City governments are often smaller and more nimble than their national counterparts. They are directly accountable to their local constituents and are more invested in the people and places they serve. Regardless of wealth or resources, size or location, cities around the world are learning from one another, adapting global best practices to fit local circumstances and demonstrating that they have the power to take action to build a smarter, more resilient and resource-efficient world.

By specifically naming 100 concrete city solutions to climate change that can be scaled and replicated across the world, Sustania and C40, along with our partner Realdania, hope to inspire cities to go even further and faster after COP21 in taking action to tackle climate change.

Groundbreaking Ruling: State Has Constitutional Obligation to ‘Stem the Tide of Global Warming’