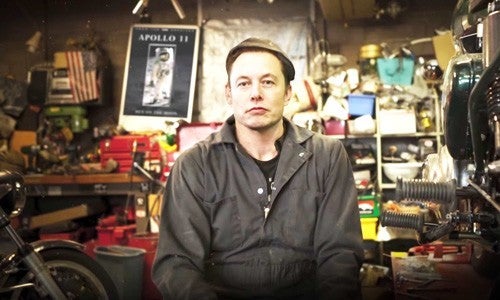 Imagine Martin Luther King hadn’t had a dream, Gandhi didn’t stand up to the powerful elite and Elon Musk had taken “no” for an answer when they tried to kill the electric car. What kind of world would we have?

Exactly a week ahead of the opening of the COP21 climate summit in Paris, the global movement for 100 percent clean energy released the short film, 100% Possible. Created by award-winning agency Don’t Panic, 100% Possible features famous figures who triumphed over adversity—including Martin Luther King, Jr. and Mohandas Gandhi, alongside modern heroes such as Elon Musk and J.K. Rowling.

The film imagines these icons had never taken on the great challenges that have shaped today’s world. Using a 2.5D parallax technique on manipulated photographs, 100% Possible opens with a middle-aged Steve Jobs working as a sales executive, sitting alone in an office cubicle—no iPhone in sight and a Microsoft sticker on his bulky PC. The film then depicts other iconic leaders in alternate realities, having never attempted the impossible-seeming feats that made them famous and transformed our world.

100% Possible was created to underscore the need for the same determination and bold thinking when it comes to tackling climate change. In the face of enormous odds, these leaders showed that transformational shifts are not only possible, they have happened time and again. 100% Possible advocates for a transformational shift away from fossil fuels to 100% clean, safe, renewable energy—and aims to explode the myth that it would be “impossible” for the world to be powered this way.

As the closing sequence of 100% Possible shows, clean energy is already being deployed at record rates and is now the world’s second largest source of electricity. In the last few days, Stanford engineers released detailed roadmaps showing how 139 countries can shift to 100 percent renewable energy by the year 2050. A world powered by 100 percent clean energy is 100 percent possible.

The timing of 100% Possible’s release highlights that next week’s COP21 summit offers a unique opportunity to accelerate momentum towards a 100 percent clean energy future. Climate change is a huge threat that demands bold action and 100 percent clean energy is a solution equal to the scale of this challenge. The 100 percent movement asks people to share the film to show their support for this vision and to encourage a strong deal at COP21.