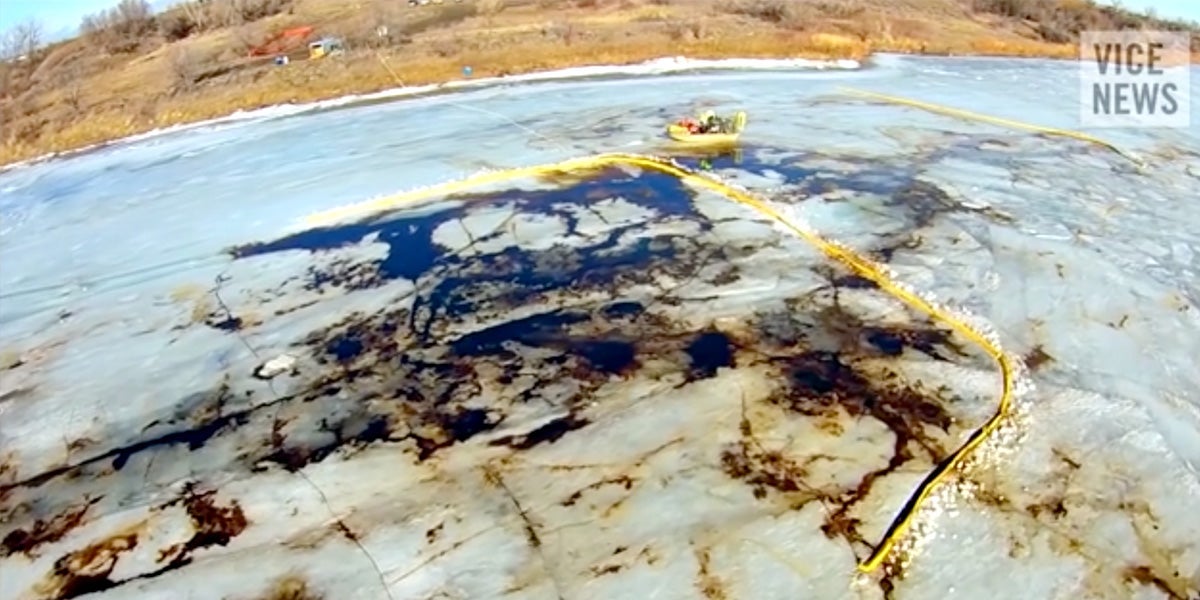 On Sunday, Dec. 4, 2016, the Army Corps of Engineers issued a decision which will
again delay construction of the Dakota Access Pipeline. The ruling was cheered by water protectors entrenched in the path of the pipeline at the Standing Rock Sioux Reservation. These representatives of indigenous nations, environmental activists, veterans and many other groups have been resisting pressure from private security and law enforcement officers from at least 76 different state and federal agencies or departments, as well as enduring sub-zero blizzard conditions. However, the ruling does not definitively end the controversy, it only delays the decision until further environmental impact studies are conducted.

Unfortunately the choices before the Army Corps appear to be limited, given the fact that as much as 87 percent of the North Dakota portion of the pipeline is already complete and nearly 50 percent of the almost $3.8 billion dollar project is completed and/or in the final stages of cleanup and reclamation. Furthermore, any further environmental impact study and public comment for the Army Corps could easily hand the decision over to Trump Administration which has expressed support the pipeline (despite the obvious conflict of interest with the President-Elect owning stock in several of the key companies involved). So while hands are wrung and ink is spilled on the specifics of this pipeline, let’s take a look at why people around the world are rallying in opposition to any new pipelines.

The short answer is: 1. Accidents happen and 2. They are multi-million dollar investment projects which further lock us into years, even decades, of fossil fuel extraction and emissions.

You can explore
this map of pipeline spills and releases from our friends at FracTracker, but what exactly do some of these incidents look like on the ground and in the water? Here are some of the most egregious cases from the past decade.

Just this month, less than 150 miles from Oceti Sakowin Camp, a leak was discovered in the Belle Fourche pipeline. An estimated 176,000 gallons leaked and crews are reportedly testing whether or not they can burn some of the spilled oil to stop further spread of the oil.

As of Dec. 15, 10 days after the spill was discovered, less than 1/3rd of the oil had been recovered. But this is the not the first time that True Companies, the pipeline operator, has been in the news. 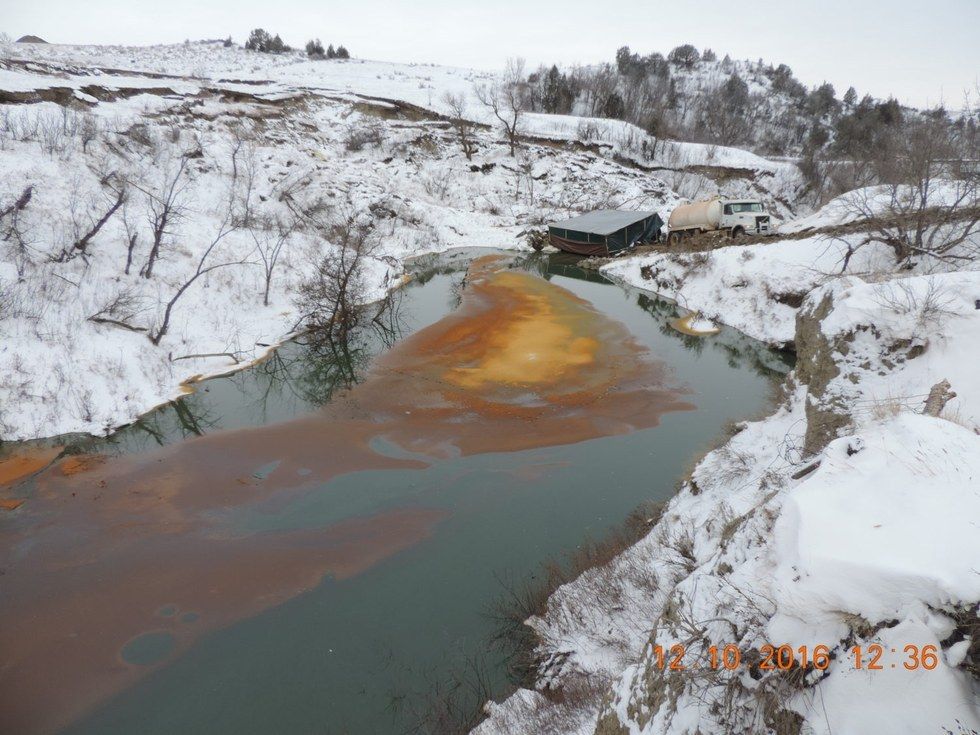 True Company/Bridger Pipeline’s Poplar oil line leaked 32,000 gallons of oil into the Yellowstone River, a tributary of the Missouri River (and by extension, upstream of Standing Rock). The pipeline was supposed to be buried eight feet beneath the river bed, but after the spill investigators discovered that the pipeline had become completely exposed. And it wouldn’t be the first time for the Yellowstone River. In July 2013, an Exxon pipeline also leaked 63,000 gallons of oil directly into a different section of the river when it too became exposed and was damaged by flood debris.

Oil is hard enough to remove from water, but what about when that oil sinks?

In south-central Michigan a thirty-inch pipeline carrying diluted bitumen from Canada blew a six-foot gash along a corroded seam, releasing 843,000 gallons of heavy oil product into the Kalamazoo River. Canadian energy transporter Enbridge, the operator of the pipeline, would ultimately be deemed responsible for the largest inland oil spill in U.S. history, with a U.S. National Transportation Safety Board official comparing the company’s spill response to the “Keystone Cops.”

Fittingly, the Enbridge spill quickly became Exhibit A in the fight against the Keystone XL pipeline which was ultimately rejected by President Obama in 2015. While scientists and activists debated whether or not tar sands bitumen diluted for transport was more corrosive to pipelines than regular oil, another major tar sands pipeline would make headlines.

In a quiet Arkansas suburb, Exxon Mobil’s Pegasus pipeline burst, spilling an estimated 210,000 gallons of tar sands bitumen through a residential subdivision and into nearby Lake Conway. With assistance the Arkansas Chapter of Sierra Club, we used satellite imagery taken before and after the disaster to document the impact on the community and nearby public lands.

But it is not just the U.S. concerned about new oil pipelines. Our neighbors in Canada have also had their fair share of pipeline accidents and have their own slate of new pipeline projects concerning them.

On a warm summer afternoon in British Columbia, a contractor’s backhoe struck the Transmountain Pipeline near Westridge, releasing a gusher of more than 59,000 gallons of crude oil into a residential neighborhood. But in 2016, Canadian Prime Minister Justin Trudeau recently approved Kinder Morgan’s plans to expand the Transmountain Pipeline, while making moves to block Enbridge’s Northern Gateway pipeline.

In addition to spills on land, locals are deeply concerned about the risk of oil spills from increased oil tanker traffic along the coasts. Those concerns were
brought back to the fore when a tug boat, the Nathan E. Stewart, ran aground near Bella Bella, BC while pushing an empty fuel barge. Even without any cargo in the barge, fuel and hydraulic fluids from the tug contaminated the shoreline and shellfish beds while it took over a month to extract the Stewart from its watery resting place.

These spills have all focused on oil pipelines, but natural gas and refined petroleum pipelines pose their own unique threat.

Here in the Mountain State, an aging 20-inch transmission line exploded a few years ago, enveloping Interstate 77 in a wall of flames and destroying several homes. Fortunately there were no fatalities. The pipeline was constructed in the 1960’s.

More recently, a thirty-inch gas transmission line in western Pennsylvania exploded, destroying a house and hospitalizing a 26-year-old with third-degree burns more than 75 percent of his body. The Spectra Energy transmission line was installed in the 1980’s.

An excavator conducting repairs from a prior incident on the Colonial Pipeline struck the massive gasoline transmission line, causing a fiery explosion and ultimately killing two. The Colonial Pipeline provides the East Coast with 40 percent of the gasoline consumed and is the largest petroleum distribution system in the U.S.

As we have published before, even the Obama Administration has fallen short in addressing serious concerns surrounding pipeline safety. For all of the claims that modern pipelines will be safe and loaded with spill-prevention tech, we’ve yet to see clear evidence of this technology stopping major spills. Even in the Gulf of Mexico, Shell recently lost 90,000 gallons of oil from a subsea pipeline but the person credited with discovering it was not the pipeline operator, but a helicopter pilot who just happened to be passing by.

Even assuming that we could put an end to this litany of disasters, many people are standing up to pipelines because each new project is a multi-million dollar commitment to perpetuate further fossil fuel extraction and consumption for decades to come. In some states and regions, New England for example,
companies have proposed passing the construction costs on to ratepayers, even those who don’t consume the gas directly. If this subject concerns you, we urge you to investigate what kind of pipeline proposals may be in the works in your region.

Here are just a few we are aware of: