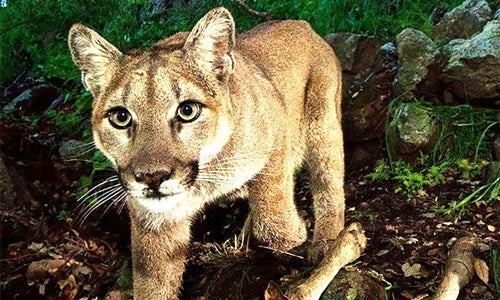 Earlier this month an obscure Los Angeles area regional public lands agency—the Mountains Recreation and Conservation Authority—announced the first stages of a five-year plan to build one of the largest wildlife corridors in the world. The goal is to create a natural looking bridge that will allow a small cougar population in the Santa Monica Mountain National Recreation Area the chance to escape north into much larger public lands, while at the same time allowing northern mountain lions the chance to move south and help out the badly inbred and lethally infighting Santa Monica cougars. 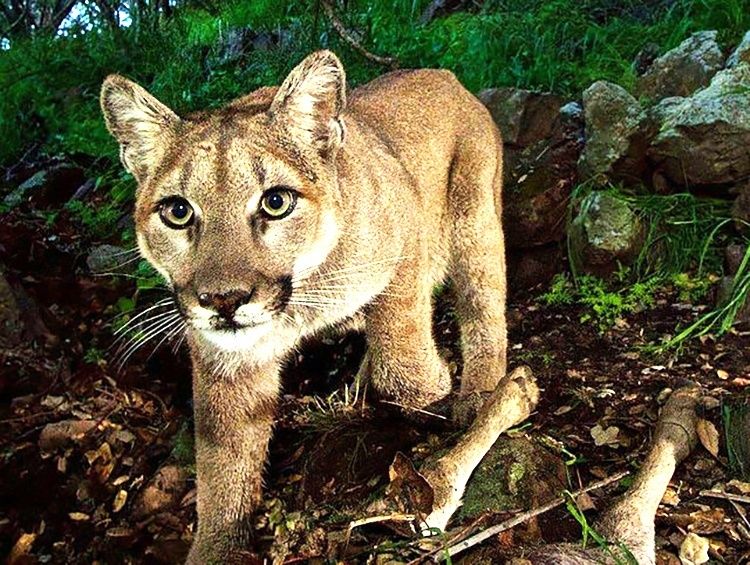 The proposed bridge will leap over Highway 101, an eight-lane, east-west freeway in LA’s northern suburbs that sees 175,000 car trips a day. The bridge will be built at Liberty Canyon in the suburb of Agoura and when completed will be 200 feet-long and 165 feet-wide. It will be landscaped to blend in with the brushy hills and sound walls along the edge of the bridge will “mitigate traffic noise and block light in order to make the crossing more conducive to wildlife,” says the project study report. The bridge will extend beyond the 101, reaching over an access road south of the highway, necessitating the construction of a tunnel. Estimated cost of the entire project: about $57 million.

Despite the report’s dull bureaucratic language—mountain lion sex is blandly described as “the exchange of genetic material”—at its heart the proposed Liberty Canyon wildlife corridor represents an astonishing effort to reverse decades of suburban sprawl and fragmentation of the region’s surviving open spaces.

The campaign’s iconic poster boy is the famous “Hollywood lion,” also known by its wildlife ID number, “P22.” In 2012, P22 crossed two major freeways and migrated roughly 40 miles from the Santa Monica Mountains along the coast to Los Angeles’s 4300-acre Griffith Park on the city’s eastside. There he took up residence, feeding on the park’s mule deer and soon became a national celebrity of sorts. 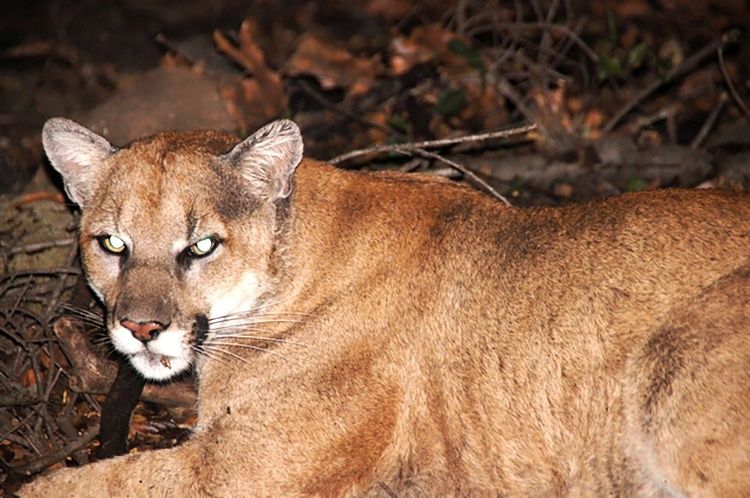 P22, the only young male from the Santa Mountain Mountains to escape death, is not considered an example of successful dispersal because he will never breed. Photo credit: Crystal / Flickr

Beth Pratt was one of P22’s earliest and most ardent fans. Pratt, the California executive director of the National Wildlife Federation, was fascinated by the lion’s story and contacted wildlife biologists studying the Santa Monica Mountains cougars. One of those biologists was Dr. Seth Riley, who from 2002 to 2012 led a National Park Service team that trapped some 42 cougars: 26 from the Santa Monica Mountains, five from the Santa Susana Mountains north of 101 and the rest from throughout the region. All of the cougars were fitted with GPS transmitting collars. The cougars trapped north of 101 mostly survived. But the 12 young males from the Santa Monica Mountains did not make it. They tried to disperse, going right up to the edges of the region’s freeways. Four who tried to cross died in the effort. Five who turned back were attacked and killed by older male lions. One was shot by police; one died from unknown causes.

The only young male from the Santa Mountain Mountains to escape death was P22—and he is not considered an example of successful dispersal because he will never breed. “The [Santa Monica Mountains] are a population sink,” the park service’s Riley concludes. “The Santa Monica Mountain cougar population is not going to survive in the long run. For mountain lions, there is only room for ten-ish adults. That’s not enough genetically or even demographically. One male hit by a car and one killed by rodenticide and poof, you’re done.”

Beth Pratt became taken with P22 as an icon for all the trapped lions. “I’m a shameless marketer,” she admits. “I saw how P22 could be the absolute poster child. People just love him. Once people get focused on his specific story—the lonely bachelor—you can talk about mountain lions in general.”

For Save LA Cougars’ campaign image, Pratt chose a photo of P22 taken by Steve Winter that appeared in the December 2013 issue of National Geographic. Winter used trail cams equipped with infrared and motion detectors to photograph P22 at night as he hunted in the Hollywood Hills. Pratt picked a photo of P22 facing the camera and appearing relaxed, not at all like a powerful predator. This facial portrait became the model for a tattoo on her left shoulder.