Half the Global Population Could Face ‘Unknown’ Climates by Mid-Century 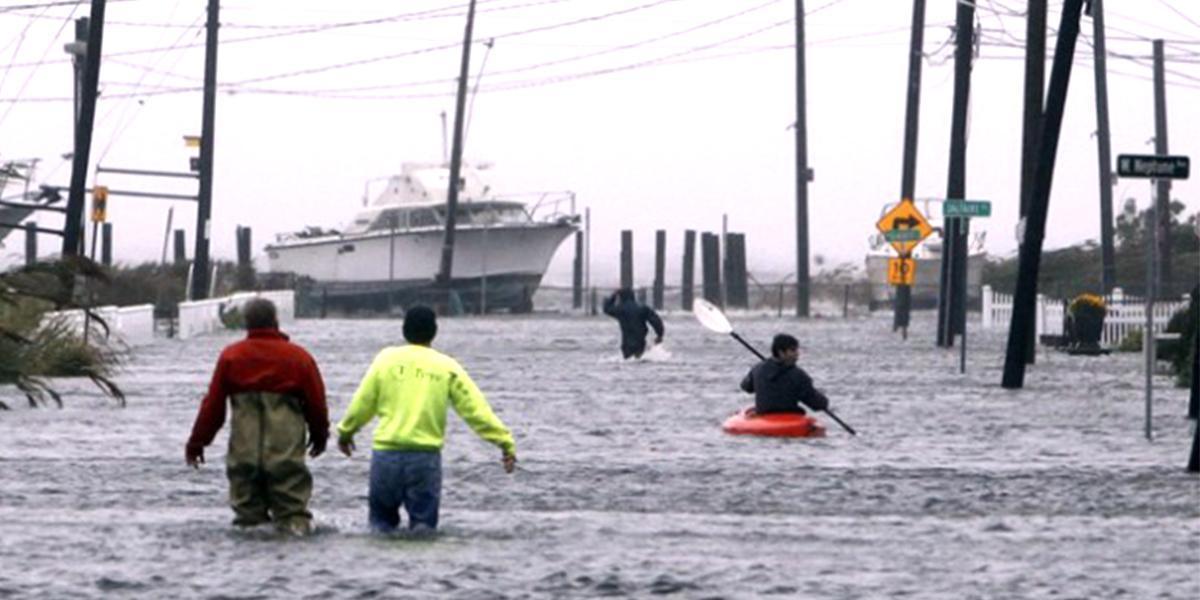 Billions of people across the world could see climates they’ve never experienced before by the middle of the century, a new study said.

Using a measure of climate “familiarity,” the researchers showed that the tropics in particular are likely to experience conditions that are virtually unheard of for the region in the present climate.

But keeping global temperatures rise below 2°C above pre-industrial levels could help keep the climate “familiar” within this century, the researchers said. That means people alive today could see the benefits of mitigation within their lifetimes.

While climate change research often focuses on how many degrees temperatures have warmed or the projected change in annual rainfall, a relatively recent approach is to consider the “time of emergence.”

The weather we experience every day is a combination of the long-term trend of climate change—the “signal”—and the short-term fluctuations of natural variability—the “noise.” The time of emergence is the point when the signal becomes clear above the noise.

Taking this idea in a slightly different direction, the new Nature Climate Change study focuses on the magnitude of emergence, rather than the time. In other words, showing how much future climates are going to differ from the highs and lows that people currently experience.

This approach can help pinpoint where climates are likely to change beyond what people have to cope with at the moment, said lead author Dr. Dave Frame, director of the New Zealand Climate Change Research Institute at Victoria University of Wellington. He told Carbon Brief:

Carbon Brief spoke to another of the study’s authors, Dr. Manoj Joshi from the University of East Anglia, about the study at the recent European Geosciences Union General Assembly in Vienna. You can see him explaining the findings in the clip below.

Using climate models, the researchers calculated signal-to-noise ratios—i.e. the change in average temperature divided by the year-to-year variability—for future temperatures across the world. The higher the resulting score, the more unfamiliar future climates are likely to feel for the people in that region.

The researchers then classified projections of temperature change in terms of how unfamiliar the climate is expected to become.

You can see some of their results in the maps below for a moderate emissions scenario called RCP4.5. It’s worth noting that current emissions are tracking above RCP4.5, close to the highest emissions scenario used by the Intergovernmental Panel on Climate Change (RCP8.5).

The upper map shows the signal-to-noise ratios for temperature by the end of the century. The darker the shading, the more unfamiliar the climates are expected to become. 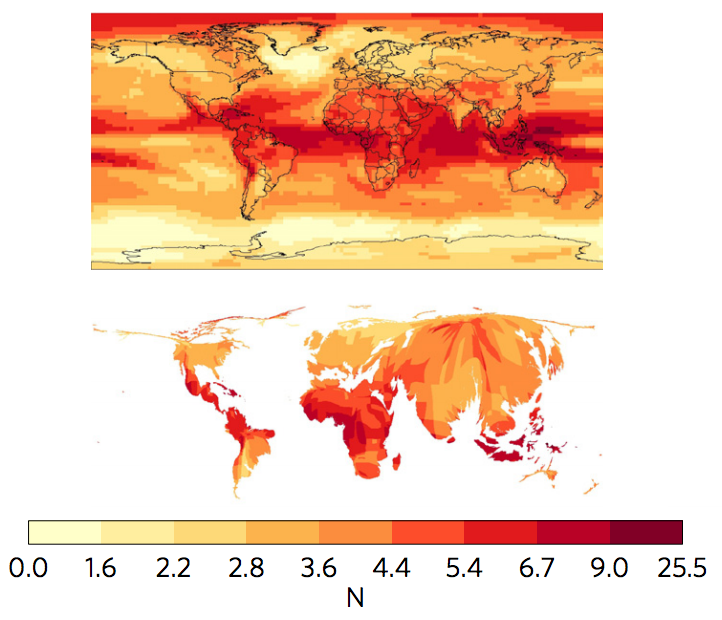 The results also show that tropical regions are likely to experience the most dramatic changes to the familiarity of the climate. These areas, which include Malaysia, Indonesia, western India, West Africa and Central America, are home to almost half of the world’s population.

You can see this in the lower map (above), which shows the same signal-to-noise values, but where the size of the land areas is distorted to represent the size of the population affected.

While other places might experience higher absolute temperature change, the impacts will be felt more keenly in the tropics, Joshi explained:

“Even though the temperature change they experience is less than than might be experienced in the Arctic, compared to the variability that people have seen in the past, this change is actually a very big deal.”

“We suggest that a key measure of successful mitigation should involve keeping climate as ‘familiar’ as possible.”

Their results suggest that under the lowest emissions scenario—broadly equivalent to a world no more than 2°C warmer than pre-industrial levels—unknown climates are avoided for much of the world.

This shows that cutting emissions now can prevent some large changes in the signal-to-noise ratio of future temperature, said Frame. These benefits could be felt within the lifetimes of people alive today.

“For a young adult in Indonesia, Colombia or Nigeria today,” he added, “the results show that mitigating from a high carbon path to a low carbon path can keep the climate they experience in late life at least a bit similar to those they enjoyed in their young days.”

This is a compelling way to incentivize people to cut emissions.

“It’s quite a powerful message to say ‘your actions will affect your world that you will see in the future,” said Joshi. “You will be alive to see the benefits of mitigating—of lowering—carbon emissions.'”

In fact, this is the most important finding from their study.

“Too much of the climate conversation implies that mitigation is something that has benefits for people in the distant future,” Frame said. “We’re showing that many of the beneficiaries are alive today, working and paying taxes.”