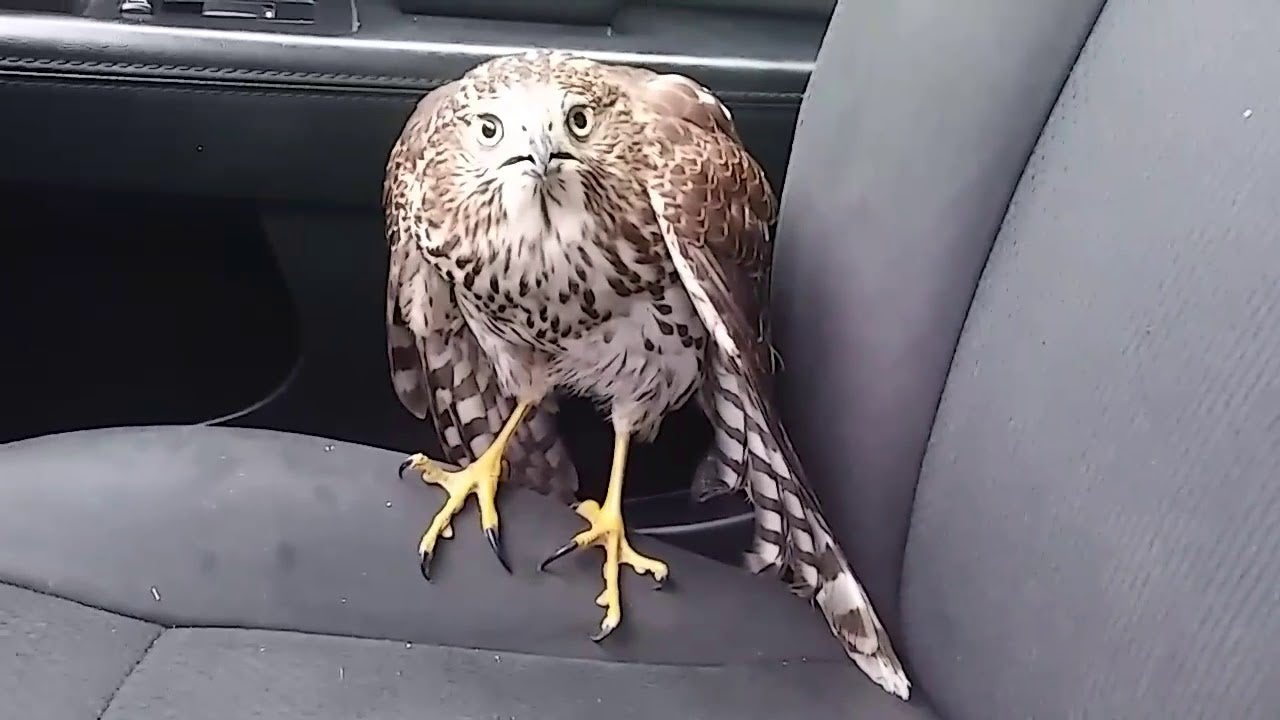 Thousands of people affected by the past two months’ hurricanes owe their lives to the brave emergency responders at state and city police departments, 911 call centers, fire stations, the National Guard, and the Red Cross. But what about the wild animals whose habitats have also been destroyed? That’s where wildlife rehabilitators, or “rehabbers,” come in—specially trained and licensed individuals (often working as volunteers) who typically work in collaboration with local wildlife centers to retrieve and rehabilitate mammals, birds, reptiles and other species in distress.

Wildlife centers are often sparsely staffed and underfunded. In the aftermath of a natural disaster, they depend on networks of wildlife rehabbers to help respond to the barrage of calls, emails, and texts that come in about animals in danger. This was certainly the case when Hurricane Harvey pummeled Houston, Texas in August. TWRC Wildlife Center Executive Director Roslyn Even had to evacuate all staff and animals from their facility (the Center is located in a flood zone behind a reservoir); in the days that followed, TWRC relied on individual rehabbers to connect with callers seeking assistance. “Those [rehabbers] who could leave their homes would make arrangements to meet people in the neighborhoods who had animals,” Even explained. 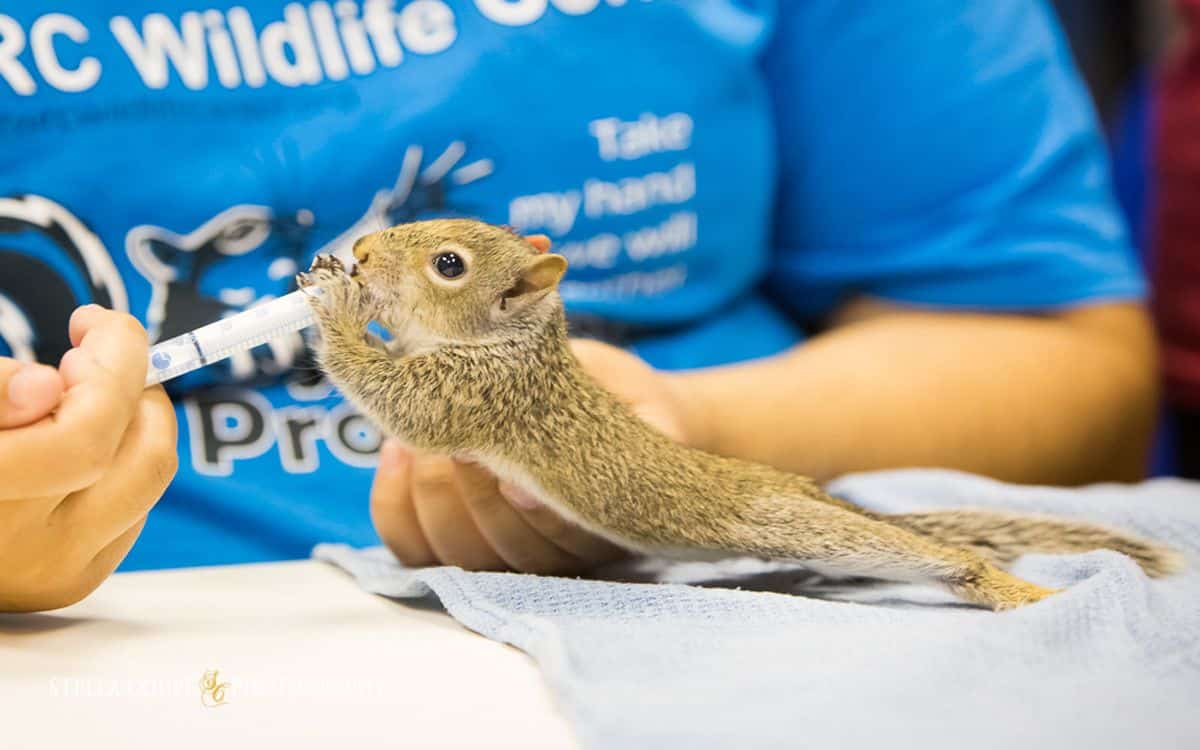 In addition to several baby squirrels and hummingbirds, TWRC rescued one of the most famous faces of Hurricane Harvey: Harvey the Hurricane Hawk. After TWRC staff member Liz Compton saw a YouTube video of a Cooper’s Hawk riding inside a cab (apparently unable to fly away), Compton contacted the driver and found her way through the flooded streets to retrieve the hawk for rehabilitation. The story went viral, with people from all over the world expressing concern over the hawk. Once rescued, it was quickly identified as a female, but the name stuck. After significant recovery, she was transferred to the Blackland Prairie Raptor Center for further rehabilitation, and was recently released back into the wild. Roslyn Even cites the hawk’s high profile as a silver lining in the hurricane’s wake. “I think we’ll be able to take better care of the animals that are here surviving, because there is more awareness.”

In other cases, residents were left with no other choice than to take in struggling animals until the roads were safe enough to get them to a wildlife center. “They themselves were waiting to be rescued,” Even said of the people calling in. TWRC staffers offered helpful information on how to keep the animals warm and safe. “That was one of the only times we’ve ever given advice on how to feed the animal,” said Even. She explains that normally, rehabilitators advise citizens not to feed or give the animal anything to drink for fear of causing more harm. “It was going to be days before we could get to the animal,” she said. “There wasn’t easy access; it was like a maze to get from one side of town to the other. People had to go hours out of their way.”

Rehabbers flocked in from other cities to join the relief effort. When a video depicting Alicia Plunkett’s efforts to save Houston’s famous Waugh Bridge bat colony went viral, Erica Quinzel of Bat World Sanctuary in Weatherford, Texas—almost 300 miles north of Houston—jumped in the car and headed south. Despite suffering several flat tires from driving through flooded, debris-filled streets, Quinzel managed to take all of the hundreds of bats Plunkett had rescued and provide them with fluids, meals, and warmth until they could be released. Before the flooding became too dangerous, Quinzel also aided Plunkett in rescuing as many additional Waugh Bridge bats as possible. The majority were rehabilitated and released by Quinzel within days, and 70 bats were transported back to Bat World Sanctuary for specialized rehabilitation for broken wings and other injuries. 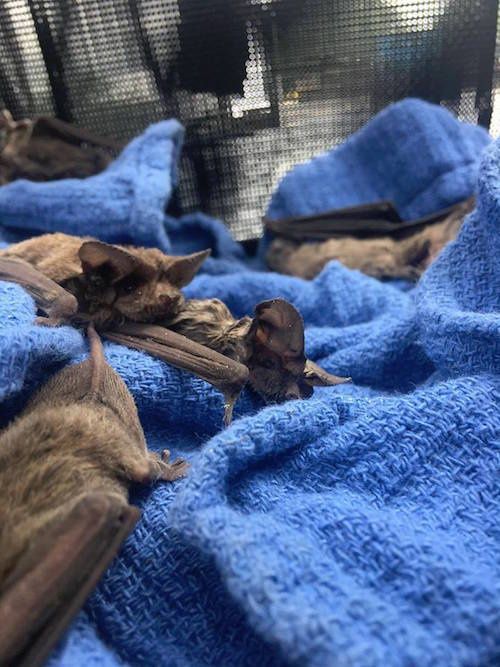 San Antonio-based wildlife rehabilitator Michelle Camara—director of Bat World Alamo and owner of Southern Wildlife Rehab—took another approach: organizing a fundraiser to support Harvey-affected rehabbers throughout the state. After the online campaign garnered national attention, Animal Help Now and IWRC (International Wildlife Rehabilitation Council) joined with Camara to expand the fundraiser to include wildlife rehabilitators responding to Hurricane Irma and other climate events. The more than $12,000 donated so far has now been distributed to rehabbers and wildlife centers working with limited and flooding-damaged supplies.

Not long after Harvey made landfall in Texas, Hurricane Irma hit Florida, and the state’s wildlife rehabbers sprang into action. Fort Lauderdale’s Southern Florida Wildlife Center relocated several hundred animals before closing its doors out of safety concerns as Irma made landfall. The Center’s staff and volunteer wildlife rehabilitators were left to take in and foster newly injured and orphaned animals—mostly young squirrels, juvenile birds, and baby raccoons blown out of their nests and trees during the worst of the storm.

On Florida’s Gulf coast, in the midst of raging winds, power outages, and dwindling supplies, the Wildlife Center of Venice took in a record 130 animals—more than 10 times its usual workload. Incredibly, volunteers still showed up that day to take care of the center’s newest residents: wildlife orphaned and injured by Florida’s latest disaster.

Meanwhile, on South Florida’s other coast, licensed wildlife rehabilitator Lloyd Brown spent the first 12 hours of “landfall day” alone at the center he founded, Wildlife Rescue of Dade County, waiting for volunteers to brave the storm and help field the constant intake of wildlife. “I could barely get one animal treated before another animal came in,” recalled Brown, a firefighter who spends his off days running (and funding out-of-pocket) the center. The most common greeting Brown heard upon picking up the receiver that Monday? “Oh thank God someone finally answered the phone!” During that worst day of the hurricane, fellow rehabbers in the area had apparently been unable to take calls. A rehabber-vet feeds an injured raccoon in the wake of Hurricane Irma.Lloyd Brown

A rehabber since 1993, Brown worked for years as one of the lead rescuers for the U.S. and International Chapters of the Humane Society, saving animals in dire straits across the globe. When he isn’t fighting fires or rescuing animals, he teaches a natural disaster response course for other animal rehab centers. “Everybody has a plan until it actually hits. Then your plan starts to fall apart,” said Brown, whose course encourages people to rehearse for disasters and ensure that things like backup generators are working properly. One important takeaway from Brown’s experience with Irma? To always have liquid canned formula on hand, in case of power loss, which can cause powdered formula to spoil. 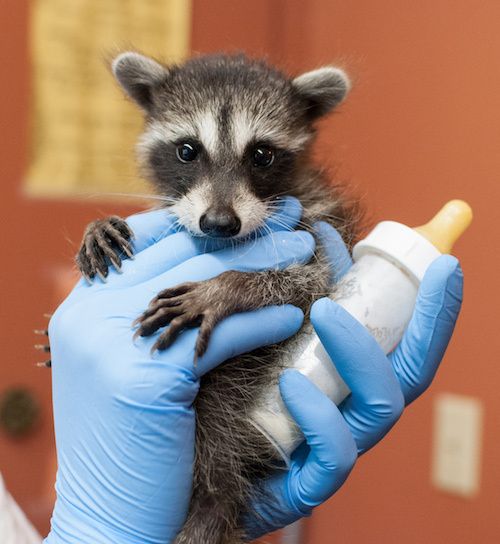 A thousand miles southeast of Florida, the island of Puerto Rico lies exposed in the middle of the Caribbean Sea. Slammed with back-to-back hurricanes this season, Caribbean wildlife had little time to find shelter before the next big storm. In anticipation of the arrival of Hurricanes Irma and Maria, Puerto Rico’s U.S. Fish and Wildlife Service (FWS) staff took preemptive measures to protect wildlife in the El Yunque Aviary, located in Northwest Puerto Rico’s mountainous El Yunque National Forest. Two FWS employees spent a day gathering the endangered Puerto Rican parrots in their care and “hunkered down” with the birds high up in the mountains. These dedicated employees weathered the storm in the aviary’s hurricane room, constructed to withstand hurricane-force winds. FWS public affairs specialist Mark Davis confirms that all but four Puerto Rican parrots made it safely through Hurricanes Irma and Maria in the El Yunque Aviary. Like so many wild species this hurricane season, these parrots’ safety can be credited directly to the heroic efforts of wildlife specialists and rehabilitators.

Rehabbers help maintain humans’ and animals’ delicate coexistence within an uncertain, ever-changing climate. Camara emphasizes the importance and urgency of funding rehabbers, especially in times of crises, as they often pay out-of-pocket for supplies to take care of rescued animals. “Give five dollars to Red Cross and five dollars to a wildlife rehabber,” she suggests, noting that these funds go directly to wildlife centers with no strings attached—allowing rehabbers to do their jobs minus the burden of applying for grants and waiting for funds to arrive.

Camara notes that rehabbers must take risks and deal with grief on a regular basis, because despite their best efforts, injured animals often die on their watch. Still, as natural disasters ravage coasts and cities, rehabbers keep going out there to help the helpless. “We’re a special breed of people,” she says. “We’re like superheroes. We can handle everything. That’s what we do.”