What American Environmentalists Can Learn From Prime Minister Modi 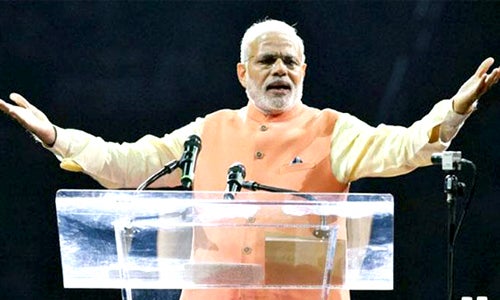 A Discourse of Character not Consequence

Prime Minister Narendra Modi’s rock-star love-fest with the American Indian diaspora at Madison Square Garden last week was hardly a policy address—Modi’s theme was India’s potential greatness and his vision of how to enable it, not a ten-part to-do list for his new government. But his summation of the flaws that today’s India must overcome to achieve that “India First” transformation sounded strikingly like an environmental agenda—climate change, solar and wind power, sanitation and toilets, reforestation. Indeed, in seeking to enlist his emigrant audience to “give back” to Mother India the upbringing, nurturing and education she had provided them, Modi closed with a seven minute recruitment video devoted entirely to his passion to clean up the Ganges River.

Modi leverages these environmental examples to make deeper ethical claims. After talking about the needs for sanitation and toilets, he turbo charges the applause with this line: “People ask me when I talk about these things, ‘but what is your grand vision, what are your big ideas?’ I remind them, ‘I got here by selling a cup of tea. I am a little man. I care about little things and little people.’” (India now has its own Log Cabin to White House myth.)

But listening and watching the video it struck me that the American environmental movement could benefit–in major ways–from reflecting carefully on the way in which the Prime Minister frames our issues. Modi, I think, gets the rhetoric and ethics of the environment better than American greens.

Social psychologist Jonathan Haidt argues that people orient towards six ethical poles: harm, fairness, liberty, loyalty, authority and purity. Society is moving rightward, according to Haidt, because liberal thinking cares only about the first three, shrugging off the others. Effectively progressives are playing poker with fewer cards in their hand than their opponents. I can’t swallow Haidt whole. After all, liberal fealty to democracy–Vox Populi Vox Dei–or socialist trust in the working class encompass with both loyalty and authority. And environmental dedication to “pristine” wilderness, organic food, and clean air and water clearly orient towards purity–indeed it is the conservative business dismissal of the precautionary principle that demeans the idea that we should avoid impurity–greens are simply worried about different sources of contamination than Mullah Omar (or Ted Cruz).

But Haidt still resonated with me, even bothered me. Listening to Modi, it finally clicks why. Modi is using environmental themes–cleaning up the Ganga, clean energy, sewers and toilets, climate and air pollution. But absent are the usual U.S. environmental discussion of numbers of premature deaths, costs of health care, parts per million. Modi’s ethical argument is not about the consequences of filth and pollution—it’s about what tolerating filth and pollution say about the ethics of the previous Indian government, and more broadly, Indian society. Modi’s emphasis on cleanliness is about character, not consequence. And the ideal society he offers is an aesthetic vision, not an actuarial table. (Although Modi and his audience know that the Ganges today is filthy, the video is unbroken eye candy, a celebration of the river’s historic glories–the Ganges the Prime Minister envisages, not the one he inherited). 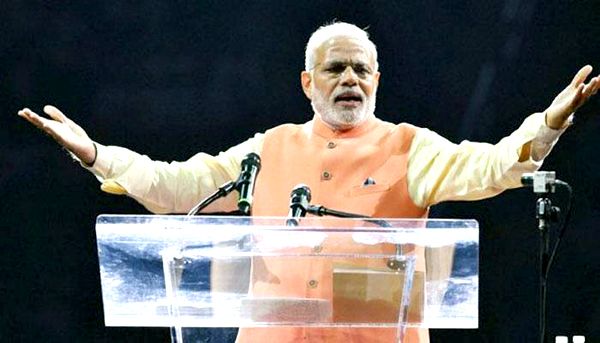 Prime Minister Narendra Modi’s rock-star love-fest with the American Indian diaspora at Madison Square Garden last week was hardly a policy address—Modi’s theme was India’s potential greatness and his vision of how to enable it, not a ten-part to-do list for his new government.

Modi avoids bogging his audience down with “how clean is clean?” He leads them to ponder inescapable personal responsibility rather than veering off into uncertain science. There really isn’t any way to dispute Modi’s emphasis on cleanliness–except to defend being filthy.

For decades environmentalism’s business antagonists repeatedly savaged our movement for not offering enough evidence. Support those clean water standards! Stop asserting more clarity on the science of climate than exists. Why you are viewing wilderness as an ethical value, nature as a religion! (The latest salvoes of this sort are the attacks on “romanticism” and “arcadian myths” from Michael Shellenberger and Ted Nordhaus at the Breakthrough Institute). Over those decades environmentalists have played defense. We now excel at presenting finer and more granular data on precisely how much harm (at what dollar cost) each example of environmental degradation inflicts. We have the Stern report. We have its U.S. update, Risky Business.

But as environmentalism has played better and better defense, society has made less and less rapid environmental progress. Perhaps in bolstering the statistics of consequence, environmentalists have dropped the brighter torch that illuminates character. What kind of generation runs ANY risk that it will disrupt the stability of global climate for thousands of years? Blows up mountains and destroys streams? Does a good person take so many fish from the ocean that none are left for his children? Or slaughter sharks to put their fins in soup? Didn’t we used to hang people who poisoned wells in the desert? And if I sprayed dilute toxic chemicals in your face from five inches I would be a felon–why is it OK if a power company does it from hundreds of miles?

If you look back at David Brower and Nancy Newhall’s first Sierra Club exhibit format book, This is the American Earth you find a voice more akin to Modi’s speech than the latest IPCC report. Some of the early conservative support for environmentalism echoes this discourse. Barry Goldwater’s mentor, Russell Kirk, wrote in The Conservative Mind that “The modern spectacle of vanished forests and eroded lands, wasted petroleum and ruthless mining, national debts recklessly increased until they are repudiated, and continual revision of positive law, is evidence of what an age without veneration does to itself and its successors.”

Perhaps Modi’s simple, eloquent Hindi can reconnect us with our own ethical and rhetorical traditions—and remind ourselves and our audience that environmental degradation says as much about who we are today as it does to threaten our posterity.