WARNING ... This Video Will Break Your Heart: 150 Wild Buffalo Captured at Yellowstone 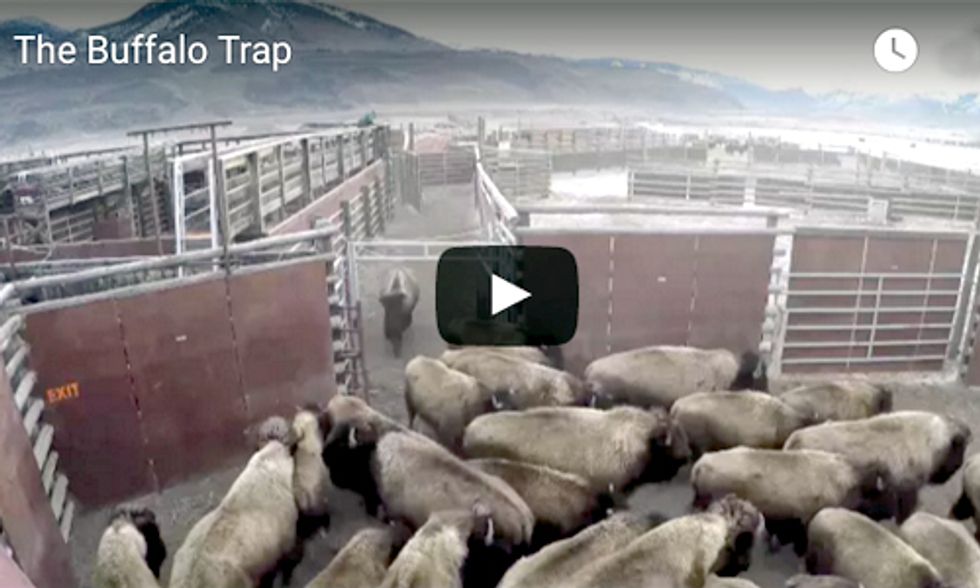 Last week's report and photos about what we, and the buffalo, experienced during the two-day media tour of Yellowstone's bison trap could barely scratch the surface of the horrible things we witnessed. This video footage will bring you much closer.

On March 8 and March 9, Yellowstone National Park organized a media tour of their Stephens Creek bison trap, where 150 wild buffalo were being held captive for slaughter and potentially quarantine. All of what you see taking place here is paid for with your federal tax dollars. Some of the footage was shot by Buffalo Field Campaign's Mike Mease and some was captured by the park service's GoPro cameras.

One hundred fifty of America's last wild buffalo were run through the gauntlet of Yellowstone's Stephens Creek capture facility; 93 buffalo were shipped to slaughter by the InterTribal Buffalo Council and the Confederated Salish & Kootenai Tribes, both of which are signatories to the Interagency Bison Management Plan. Another 57 buffalo—all orphaned calves and yearlings—are still being held in the trap.

Every person working at the trap is employed by Yellowstone National Park. The Montana Department of Livestock has Yellowstone trained so well, that the department isn't even present except when escorting buffalo to the slaughterhouses. These acts by Yellowstone National Park are horrific and criminal. There should not even be such a facility inside the world's first national park, much less anywhere else. There is no justification for the park service to commit these atrocities.

Yellowstone justifies its actions under the banner of the Interagency Bison Management Plan, which it could pull out of anytime. They may face a lawsuit by livestock interests if they did so, but, so what? So much new information has come to light, so much change has come to the landscape and such a groundswell of public support has emerged for wild, migratory buffalo, that a lawsuit might be hugely beneficial. The callous behavior of Yellowstone park rangers and biologists who are harming the buffalo reveals the gross disconnect that these people have from the sacred beings whom they are charged with protecting, and how wantonly they are willing to betray, not only their mission, but the sacred buffalo that the whole world expects them to protect.

WARNING: This video will break your heart. After watching it, you'll want to do something. Here are a few suggestions: Share this video with everyone you know, send it to your local and regional media, and share it with the White House and your members of Congress. Tell them to visit Buffalo Field Campaign to learn more.

Many thanks to the Animal Legal Defense Fund and the rest of our stellar legal team who made this media tour possible by representing journalist Christopher Ketcham and me in a lawsuit to gain full access to the trap. Showing the world even this brief glimpse of what Yellowstone is doing to the beloved buffalo—in service of Montana cattle ranchers—will bring us that much closer to putting an end to this madness, and bringing this trap down.