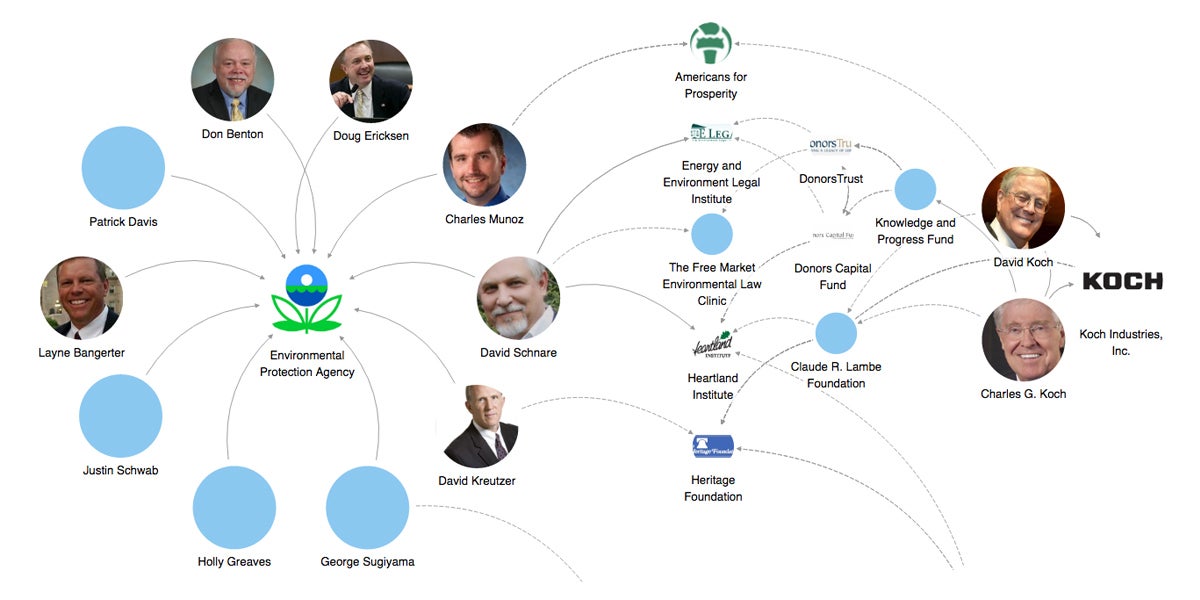 Earlier this week, staffers at the U.S. Environmental Protection Agency (EPA) received their first official email from the new administration. “Changes will likely come and when they do, we will work together to implement them,” wrote Don Benton, a senior White House adviser who is now leading the so-called “beachhead” team for the EPA’s transition, in the email published by E&E News.

DeSmog dives into what we know about the EPA beachhead team (including what it is and who is on it), whom its members are connected to and what the EPA should expect from the Trump team.

First, who is Don Benton and what is a beachhead team? Benton is a former Washington state legislator (with a history of endorsing conspiracy theories) and the beachhead team is the current incarnation of the EPA transition team, working at the agency to handle the transition until a new administrator is confirmed.

Agency transitions tend to be complicated and confusing and this one is particularly so. So let’s take a quick step back and trace the brief but chaotic history of the transfer of power at the EPA. Before President Donald Trump officially took office, his EPA transition team was being lead by Myron Ebell, the notorious climate science denier from the Competitive Enterprise Institute.

https://twitter.com/EcoWatch/status/826435638635409409 ‘science should not be adjusted to fit policy.’ But rather than heed this advice, EPA has greatly increased its science manipulation.”

On Inauguration Day, Ebell stepped down from Trump’s EPA transition team (or was relieved of his duties—it’s not entirely clear) and the new 10-member beachhead team was announced. This team is being led by Benton and Charles Munoz, a 27-year-old who led Trump’s presidential campaign in Nevada, where he had also launched the state chapter of Americans for Prosperity.

The beachhead team members have 90 day contracts and traditionally such a team’s role is to prepare the agency staff and bureaucracy for the arrival of the new administrator. As we’ve reported extensively on DeSmog, Trump nominated Oklahoma Attorney General Scott Pruitt to serve as EPA administrator and he faced a contentious confirmation hearing before the Senate’s Committee for Environment and Public Works.

Yesterday, Democratic senators on the committee boycotted the confirmation vote, demanding more information from Pruitt’s office about his “unprecedented, secretive alliance” with fossil fuel companies and calling out his office’s refusal to comply with dozens of Freedom of Information Act requests from journalists and researchers from the Center for Media and Democracy. Today, Republicans on the committee suspended the rules to push through the Pruitt vote.

Thanks to a gag order and social media freeze ordered by the Trump Administration, there’s little information making it out of the agency, either about what staff is working on or how the beachhead team is managing the transition.

Last week, Doug Ericksen, communications director for Trump’s EPA transition team, told NPR that the agency planned to review all of its scientists’ studies on a “case by case basis” prior to publication. Employees were also told to “scrub” EPA‘s climate change web pages, although the administration backed off that charge. Ericksen told Bloomberg BNA that the agency plans to restore full communications rights, including social media, “as soon as possible.”

Until we learn more, here’s what we do know about the beachhead team and some notable affiliations, mapped out using the LittleSis platform.

view this map on LittleSis

Charles Munoz is the White House liaison to the EPA landing team and was a top Trump organizer in his home state of Nevada. Munoz helped launch the Nevada chapter of Americans for Prosperity, a political advocacy group funded by the Kochs.

David Schnare, who has waged intimidation campaigns against climate scientists, worked for 33 years at the EPA before joining a number of Koch-affiliated entities.

Schnare is director of the the Free Market Environmental Law Clinic at George Mason University, which serves as the official attorney for the Energy and Environment Legal Institute. Both are funded extensively by Donors Capital Fund and Donors Trust. Schnare is also an energy policy expert at the Heartland Institute.

David Kreutzer was a senior research fellow at the Heritage Foundation, a group funded by foundations controlled by Koch Industries

After working at the EPA during the George W. Bush Administration, George Sugiyama lobbied for the National Mining Association. Sugiyama also served as legal adviser to the Republican minority, led by Oklahoma Sen. James Inhofe, on the Senate environment committee. Inhofe is arguably the best-known climate science denier in Congress and famously declared climate change to be a “hoax.”

Two Washington state officials, described as the state’s “most radical small government lawmakers,” have been assigned key posts on the beachhead team. Don Benton, who once introduced legislation based on Agenda 21 conspiracy theories, is the Senior White House Advisor to the EPA transition. And Doug Ericksen is serving as communications director for the transition team.

Described by the Seattle Times as “an ally of the fossil-fuel industry,” Doug Ericksen was named by Washington Conservation Voters as among the state’s “Dirty Dozen” worst politicians.

Ericksen wants to make it a felony for oil-by-rail protests to block train tracks, describing it as “economic terrorism,” although the Seattle Times notes that Ericksen’s motive is “punishing environmentalists, tribal activists and others who have illegally obstructed oil and coal trains, pipelines and similar projects.” The Times notes, “More than going after individual protesters, Ericksen said the legislation’s goal is to target wealthy, liberal donors, such as billionaires George Soros or Tom Steyer and organizations such as the Sierra Club, for sponsoring disruptive demonstrations. They could be held liable for damages under the bill.”

Shannon Murphy, head of the Washington Conservation Voters, said, “Sen. Ericksen’s and Benton’s environmental records speak for themselves. They are both climate deniers who have consistently voted against protecting clean air and water for communities across the state.”

The Rest of the Team

Patrick Davis ran Trump’s campaign in Colorado and before that was accused of defrauding a wealthy super PAC by steering money to fake organizations “run” by Davis and his friends.

Layne Bangerter headed the Trump campaign in Idaho and most recently worked with Sen. Mike Crapo (R-ID), whose website claims that the cause of changes to the Earth’s climate “is ultimately not well-understood and is a matter of vigorous debate.” Koch Industries donated $40,000 to Crapo’s campaign from 2013-2014.

Justin Schwab is serving as the main legal advisor and is currently an attorney at the corporate law firm Baker Hostetler in Washington, DC.

Holly Greaves is working on budget issues and was most recently a public accountant for KPMG, which works with a number of oil, gas and utility industry clients.