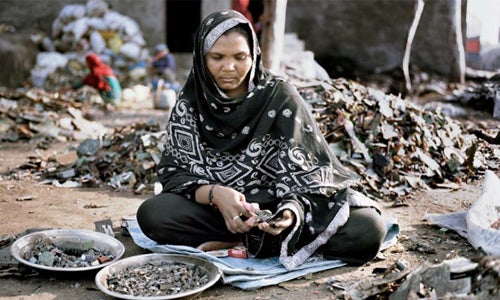 Those cold, hard numbers say a lot, but sometimes the pictures say much more. If unused electronic goods aren’t gathering dust in the garage, they are either recycled (about 30 percent of the time) or simply thrown away—out of sight, out of mind. But as you scroll through this post on your smartphone or computer, it’s important to remember that modern luxuries have a price.

While e-waste in the U.S. only makes up 2 percent of the country’s municipal solid waste stream, it’s a much more prevalent and devastating problem to less affluent countries, as demonstrated by these haunting images from Italian photographer Valentino Bellini’s ongoing Bit Rot Project.

“About 80 percent of the e-waste produced in developed countries (North America and Europe on the top of the list) is not disposed of in situ, but shipped, most of the time illegally, to developing countries on cargo ships, where it is illegally disposed of,” Bit Rot said. 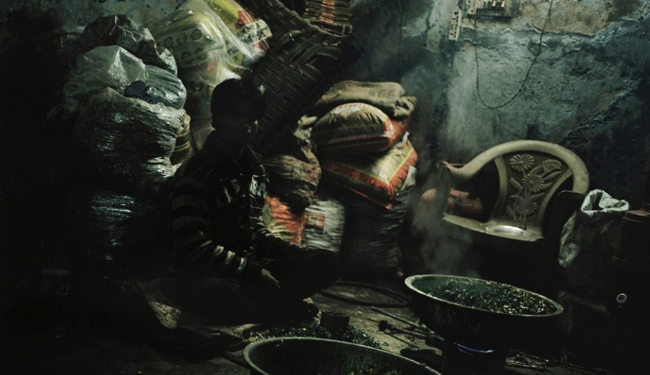 A boy in New Delhi, India boils old transistors in metal pots. Boiling the transistors melts away the plastic so the metal parts can be sold. Photo Credit: Bit Rot Project

As the latest products come along and desktop computers, MP3 players and landlines become obsolete, this gadget-driven fervor has generated mountains of toxic trash that poison people and the planet. (And it’s not just old Blackberrys and MacBooks, it’s everything from old refrigerators, televisions, toys and more.)

“Especially in countries like India, China and some African regions where the technology industry is growing fast,” Bit Rot said. “It is hazardous waste, containing dozens of substances dangerous to human health and the environment; it is hard to be sustainably disposed of and it needs a costly processing technique to make it recyclable.” 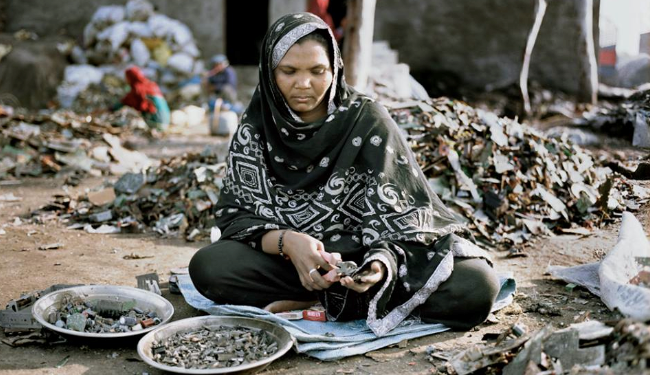 While illegal electronic waste dumping also occurs in the U.S., the appeal of sending e-waste overseas comes down to lower labor costs and fewer regulations. According to a 2013 United Nations report, China is “grappling with the reality of an estimated 20 percent annual rise in domestically generated e-waste combined with a role as one of the planet’s primary dumping grounds for global e-waste—a massive environmental, social and economic burden.”

The southeastern town of Guiyu, China is a major e-wastebasket. CNN reported that Guiyu workers burn or process tech gear with hydrochloric acid to recover valuable metals like copper and steel. In the process, it releases toxic heavy metals like lead, beryllium and cadmium into the environment. Hydrocarbon ashes have also polluted the air, water and soil. 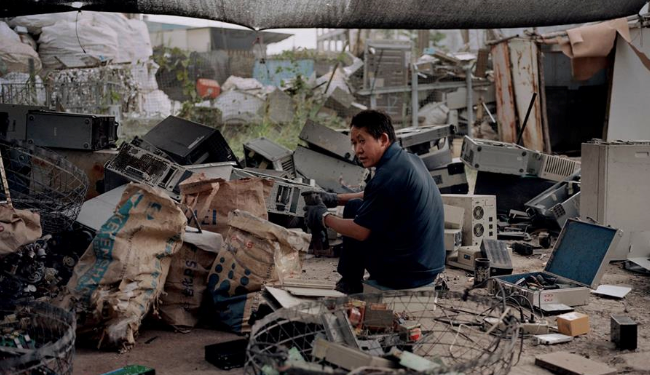 A man rips up electronic equipment in his backyard in Yaocuowei, China. He lives by the town of Guiyu, home to thousands of businesses that process e-waste, causing devastating toxic pollution. Photo Credit: Bit Rot Project

Where does all this salvaged tech junk go? Well, back into many homes. “We sell this plastic to Foxconn,” a e-waste worker in Guiyu told CNN. As it turns out, Foxconn is a Taiwanese company that manufactures products for many global electronics companies such as Apple, Dell and Hewlett-Packard.

“The commercialization process and the capitalistic valorization created a true ‘waste economy,'” Bit Rot observed. “This extends the logic behind profit and exploitation even to those scraps that it had produced, creating a never ending cycle that profits from its own death.” 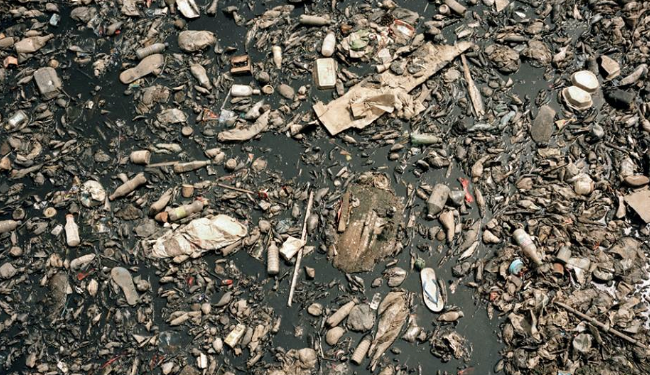 The Odaw River in Accra, Ghana is one of the most polluted in the world. Much of the waste comes from the Agbogbloshie e-waste landfill. Photo Credit: Bit Rot Project

We can change our nasty modern habits, but it’s very likely a long uphill battle. “Strengthening and enforcing insufficient international laws would thwart massive profits,” Bit Rot wrote soberly. “Disposing of a PC by sending it to a dumpster in Africa costs $2, while it would cost $20 to sustainably recycle it.”

So what can be done? The UN’s Step initiative is tackling the world’s behemoth e-waste crisis. The Obama administration also has “serious concerns about unsafe handling of used electronics, especially discarded electronics or e-waste, both domestically and overseas, that results in harm to human health and the environment,” EPA spokeswoman Liz Purchia told U.S. News. 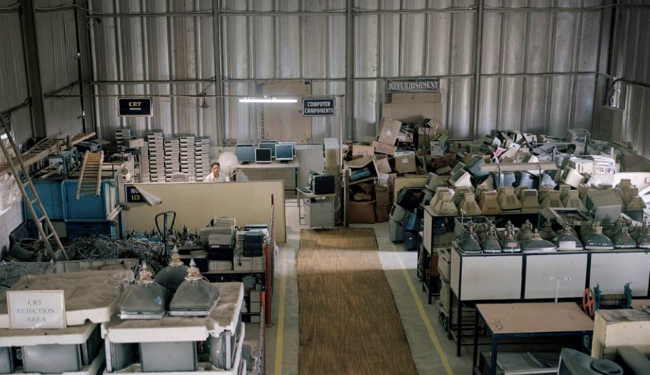 The Global E-Waste Management and Services in Tamil Nadu, India is one of the few companies authorized to treat electric and electronic waste in the country. Photo Credit: Bit Rot Project

It also looks like Americans are becoming more conscious of their own e-waste footprint. Case in point, according to recent data from Recon Analytics, in 2014, the average American replaced their mobile phone every 26.5 months, a vast improvement from every 18 months in 2007.

If you’d like to responsibly dispose of your old tech gear, check out this link to find a e-cycling center near you.

Every Time You Recycle a Can, You Strengthen the U.S. Economy