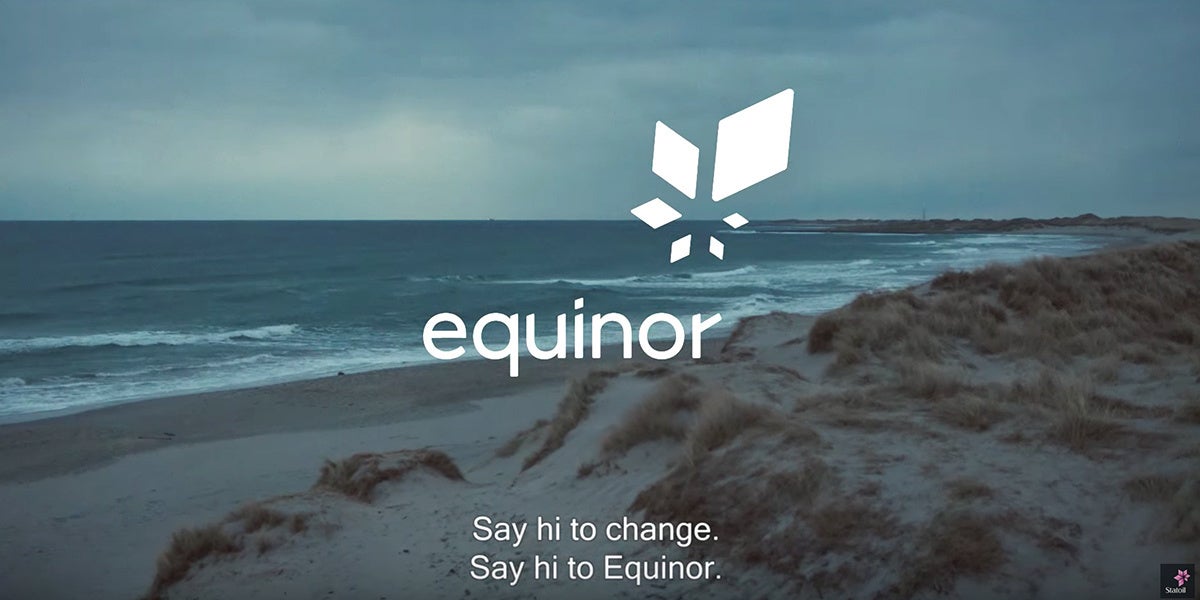 First came BP, which went from British Petroleum to Beyond Petroleum. Then Denmark’s Dong Energy changed its name to Orsted, to mark its departure from oil and gas. Then earlier this year Shell announced it was morphing from an oil company into an integrated energy company.

And now, the Norwegian company Statoil is proposing to change its name to “Equinor.” The rebranding exercise—or what some may call greenwashing exercise—will cost as much as 250 million kroner or $32 million.

The name change, says Statoil, “supports the company’s strategy and development as a broad energy company.” The name Equinor, in case you are wondering, is formed according to Statoil “by combining ‘equi,’ the starting point for words like equal, equality and equilibrium, and “nor,” signaling a company proud of its Norwegian origin, and who wants to use this actively in its positioning.”

Despite the fancy name, it transpired that it originated from an Oslo veterinary practice specializing in horses, but somehow it must have resonated with the oil company’s spin doctors. They have even made a slick video to promote the name change.

“The world is changing, and so is Statoil,” said Jon Erik Reinhardsen, chair of the board of Statoil. “The biggest transition our modern-day energy systems have ever seen is underway, and we aim to be at the forefront of this development. Our strategy remains firm. The name Equinor reflects ongoing changes and supports the always safe, high value and low carbon strategy we outlined last year.”

The company’s CEO Eldar Sætre added, “Looking towards the next 50 years, reflecting on the global energy transition and how we are developing as a broad energy company, it has become natural to change our name. The name Equinor captures our heritage and values, and what we aim to be in the future.”

“I don’t expect Equinor to be love at first sight for everyone,” he added. “Give it a little time, let it mature. I feel very confident that this is right and important for the company to do.”

The company’s hierarchy will propose the new name to shareholders at Statoil’s AGM on May 15. The Norwegian government, which is a majority shareholder in the company, supports the proposal and will vote in favor of the resolution.

Not everyone was convinced. As Bloomberg reported, “Oil majors aren’t famed for their pranks, but Statoil ASA had analysts checking it wasn’t April Fool’s Day when it announced a new name that turned out to have been acquired from an Oslo veterinary practice specializing in horses.” Bloomberg reported that the SpareBank 1 Markets analyst Teodor Sveen Nilsen said in a note to clients, “We checked the calendar. It’s not April 1.”

Reaction on social media was mixed, too, as people picked up on the origins of the word: “Equinor sounds like a princess on a horse in Game of Thrones,” one Twitter user said. “Equi” is the genitive singular in Latin for “horse,” noted another.

Statoil is just repeating history. Years ago, a book on countering corporate greenwash, edited by Eveline Lubbers, noted that BP’s “rebranding was part of an effort to portray BP as an energy company, not just an oil company.” Critics noted that the rebranding, which cost BP $200 million and was designed by Ogilvy & Mather, was a greenwashing exercise. Years later BP remains predominantly an oil and gas company.

Statoil’s rebranding looks like greenwashing, too. Buried deep in the company’s press release last week, Statoil stated that it “will develop long-term value on the Norwegian continental shelf, deepen in core areas and develop new growth options internationally …. Statoil is building a material industrial position within profitable renewable energy, and expects to invest 15-20% of total capex in new energy solutions by 2030.” Put another way, in twelve year’s time, some 80 percent of the company’s capex will still be oil and gas.

Given the climate crisis and need to disinvest from oil and gas, this is hardly a revolutionary shift. So the company may be called “Equinor,” but it will still essentially be Statoil to its core. So it really does look like an early April Fool’s joke.