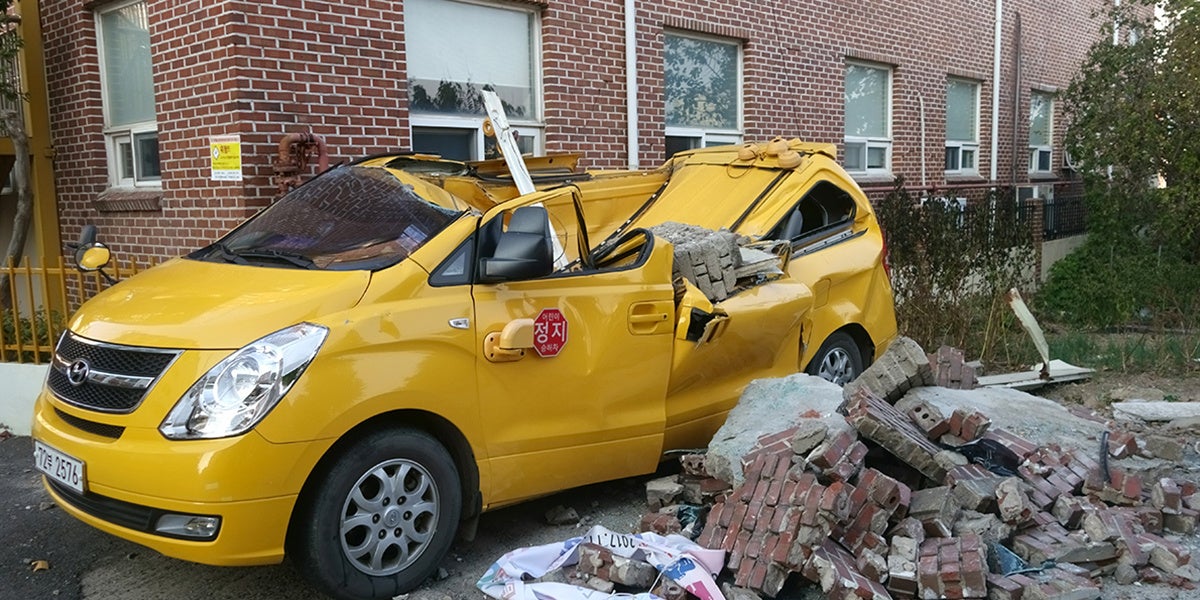 One of South Korea’s largest
earthquakes was likely triggered by hydraulic fracturing associated with geothermal energy production, according to two studies published Thursday in the journal Science.

The 5.5-magnitude temblor that struck the city of Pohang on Nov. 15, 2017 was the second most powerful on record and its most damaging,
leaving the infrastructure in ruins, injuring dozens of people and leaving about 1,500 homeless.

Hydraulic fracturing, aka fracking, works by injecting high-pressure fluid underground to fracture rock in order to achieve increased rates of flow. Fracking is often associated with unlocking oil and natural gas deposits,
but in this case, the intention was to enable circulation to produce geothermal energy.

Using geological and geophysical data, South Korean researchers from one of the studies suggested that the Pohang earthquake was induced by fluid from an enhanced geothermal system site that was injected directly into a near-critically-stressed subsurface fault zone.

Kwanghee Kim, a seismologist at Pusan National University and lead author of the study, explained that the well’s high-pressure water lubricated an unknown fault in the rock, causing it to slip and trigger the quake.

In the
second study, researchers from the University of Glasgow, ETH-Zurich in Switzerland, and GFZ-Potsdam in Germany found that the mainshock and its largest aftershocks occurred within 2 kilometers or less of the geothermal site, where many thousands of cubic meters of water were injected under pressure into boreholes.

#FRACKING LINKED TO SOUTH KOREAN EARTHQUAKE
A 2017 earthquake in South Korea which injured close to 100 people was plausibly the result of nearby hydraulic fracturing works.
?https://t.co/1xNTetRBCo pic.twitter.com/W2XcGmVHzG

They also determined that the mainshock and the 46 aftershocks detected between Nov. 15-30 all occurred at depths of 3 to 7 kilometers, which is unusually shallow compared to previous quakes in the area.

“It would be a very remarkable coincidence if this earthquake were to be unrelated to the activity at the site, given that it occurred so close to it,” Robert Westaway, a senior research fellow at Glasgow university’s school of engineering, and one of the paper’s co-authors, told
The Guardian. “My own personal view is that it is highly likely there is a connection.”

Other research has linked fracking for oil and gas to anthropogenic, or man-made, earthquakes, including a 4.8-magnitude earthquake in 2016 in northern Alberta. The alarming swarm of quakes currently rocking Oklahoma has been connected to the disposal of large volumes of wastewater from oil and gas production into underground wells.

Geothermal energy is often touted as a source of clean power, but previous
studies have also found that drilling deep into Earth to tap its natural heat could cause seismic activity, thus raising questions about the long-term risks of this energy source.

“If the Pohang earthquake proves to be human-caused, it would be the largest known associated with deep geothermal energy, and this would certainly impact future projects,” team member Stefan Wiemer of the Swiss Seismological Service told New Scientist.