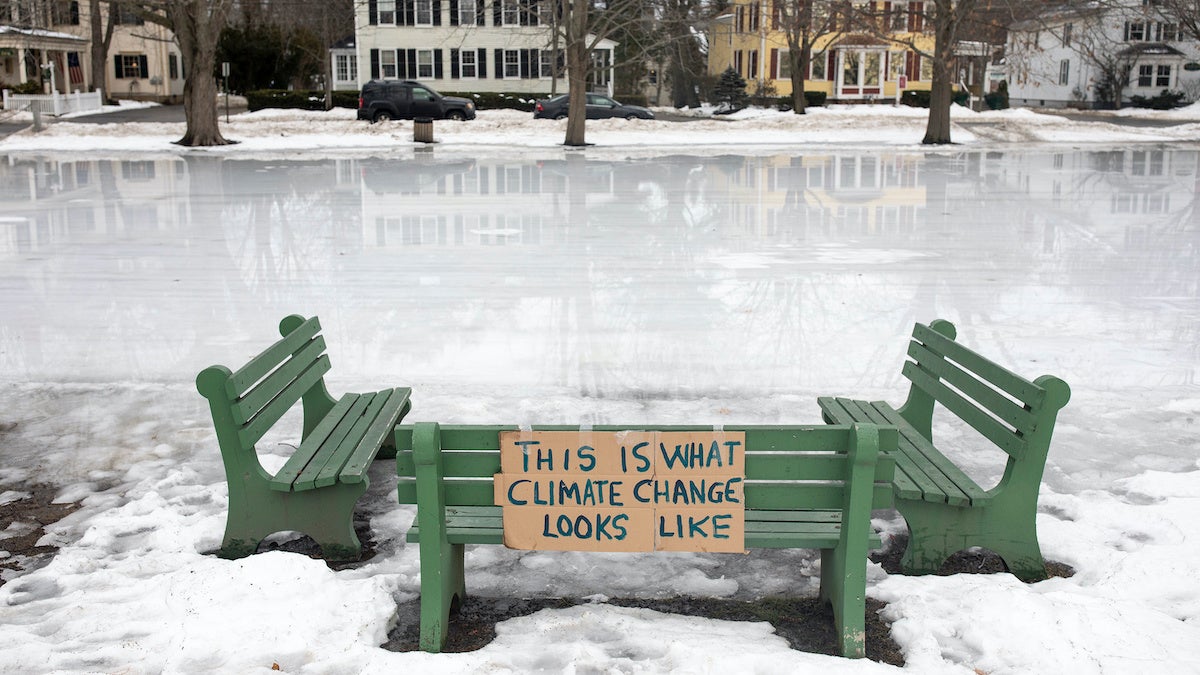 A climate change sign taped to a bench in front of a large puddle of melted snow and ice at the Brunswick Town Mall in Maine on Jan. 11, 2020, as temperatures reached into the 50s. Brianna Soukup / Portland Press Herald via Getty Images

It is no surprise if the past few months have not been the winter wonderland you were hoping for.

Recently, National Oceanic and Atmospheric Administration’s National Climate Report found that February 2020 was the second warmest February ever. It also said that it was the third warmest month ever in its variation from average monthly temperatures — only February and March 2016 were farther off average temperatures, but those were spurred a powerful El Niño system, as Scientific American reported.

The thought of quiet streets blanketed in snow and parks filled with children sledding seems like a distant memory for cities in the northeast U.S., which are on track for the least amount of snow days ever, as CNN reported.

With spring set to begin on Thursday night, it seems certain that winter 2020 will set the record for the least amount of snow days in a number of cities, including Baltimore; Providence, Rhode Island; Philadelphia; New York City, Newark, New Jersey; Bridgeport, Connecticut; and Harrisburg, Pennsylvania — none of which reported measurable snowfall (0.01 inches) for the entire month of February, according to CNN.

As AccuWeather noted, above average February temperatures set over 1,000 records in the U.S. alone.

“The 10 warmest Februarys on record globally have all occurred since 1998,” AccuWeather senior meteorologist Brett Anderson said.

The average temperature in the Northern Hemisphere was 4 degrees Fahrenheit above the 20th century average, according to CBS News. That number would have been higher if it were not for a record cold snap in Alaska and Western Canada.

“February 2020 was one for the record books across some areas of the East in terms of a lack of snow,” tweeted the National Weather Service Eastern Region. “Baltimore (BWI) MD and Islip NY recorded no snow in Feb for the 1st time. JFK and LGA airports in NYC and Atlantic City NJ needed the leap day to see their only Feb snow flurries.”

The almost-snowless season has meant that Philadelphia has seen only 0.3 inches of snow during the fall of 2019 and the winter of 2020. Boston, which is often pummeled by Nor’easters and snowstorms, has seen only 11 total days with snow, which ties the 1979-1980 season for the least amount of snow, according to CNN. Furthermore, since Jan. 1, Boston has had only 3.6 inches of snow — the least amount ever recorded for the period between January and March.

As CNN noted, Boston’s snowy season averages over 3 feet of snow, at 37.7 inches. This year, thanks to some heavy snow at the end of November and the beginning of December, the season total stands at 15.1 inches of snow. That low number almost guarantees that the 2019-2020 snow season will be far off historical norms.

It’s not just the northeast U.S. dealing with paltry snowfall. The world’s oldest ski race in Finland had to be canceled in February due to a lack of snow, while an area of southwest Russia near the border of Azerbaijan saw temperatures climb above 82 degrees Fahrenheit on Feb. 28, as Scientific American reported. Furthermore, Moscow’s average temperatures were 11.3 degrees Fahrenheit above the 1981-2010 average.