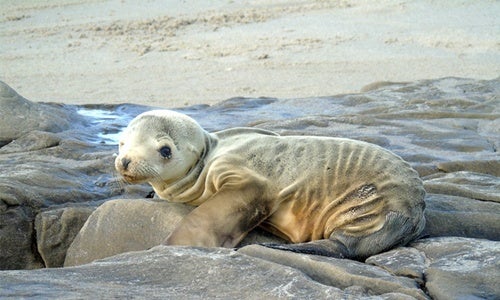 Scientists finally have an explanation for why so many starving sea lions have been stranded along Southern California’s coast in recent years. Their mothers are not getting enough nutritious food.

Last year, more than 3,000 sea lions were found stranded on Southern California beaches, a number higher than the previous five years combined. As of last week, there have been at least 375 sea lion strandings in 2016. Photo credit: NOAA Fisheries West Coast/Flickr

Instead, female sea lions have had to settle for less nourishing food sources, such as rockfish and market squid. According to the scientists, 81 percent of the change in sea lion pup weights between 2004 and 2013 could be attributed to the decline in sardines and anchovies. 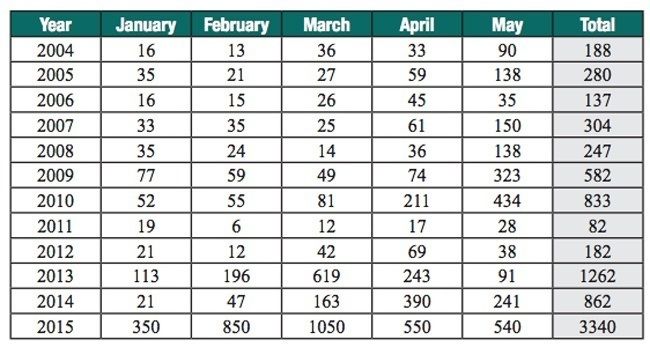 California Sea Lion Pup and Yearling Strandings for California, Jan-May 2004-2015. For the 5 month period of January – May 2015, California sea lion strandings were over 10 times the average stranding level for the same 5 month period, during 2004 – 2012. Credit: NOAA

And while the researchers knew that anchovies and sardines become scarce in El Niño years, they wondered whether the effects were limited to only El Niño years.

To find out, they needed to know where pregnant and nursing sea lions liked to hunt. They estimated a likely foraging range based on the movements of six female sea lions from San Miguel Island that were tagged by researchers in the 1990s. The data from those tags showed they liked to hunt off the California coast between Big Sur and Malibu.

Next they had to figure out what kinds of fish were available in those waters. For more than 30 years, researchers from NOAA’s Southwest Fisheries Science Center have been taking a census of young rockfish and other fish species in central California. Data for the area they needed was available from 2004 to 2014.

Finally, they looked up the average weight of 14-week-old sea lion pups from San Miguel Island for each year between 2004 and 2011. During that period, the average weight ranged from 14.8 kilograms to 20.9 kg for female pups and from 17.5 kg to 23.6 kg for male pups.

The scientists said they couldn’t study “composition or quantity of mothers’ milk,” and therefore, couldn’t make a direct link between the types of fish in the sea and the nutritional value of their milk. However, they said their results “offer compelling evidence” that the sea lion pups are starving because their mothers can’t produce adequate amounts of milk.

“Our results refocus the debate on the causes of sea lion pup weight loss from episodic stresses associated with El Niño years to a longer-term trend of declining forage quality in the waters around the California Channel Island rookeries,” the scientists concluded.

And the trend is likely to continue. “We expect repeated years with malnourished and starving sea lion pups,” they said.

Last year, more than 3,000 sea lions were found stranded on Southern California beaches, a number higher than the previous five years combined. As of last week, there have been at least 375 sea lion strandings in 2016. That’s above the average of 160 for the first two months of a typical year, according to NOAA data.

Marine conservation groups, such as Oceana, criticized NOAA for not recognizing the role overfishing has played in causing the sea lion crisis.