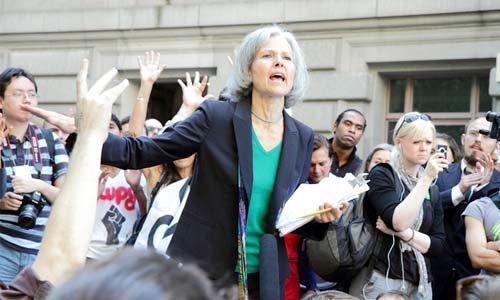 Green Party candidate Jill Stein officially announced she is running in the 2016 presidential race on June 22, during an interview on Democracy Now!. She held a campaign kickoff event the following day at the National Press Club in Washington, DC, where antiwar activist Medea Benjamin and racial justice activist Marsha Coleman-Adebayo introduced and endorsed her campaign. 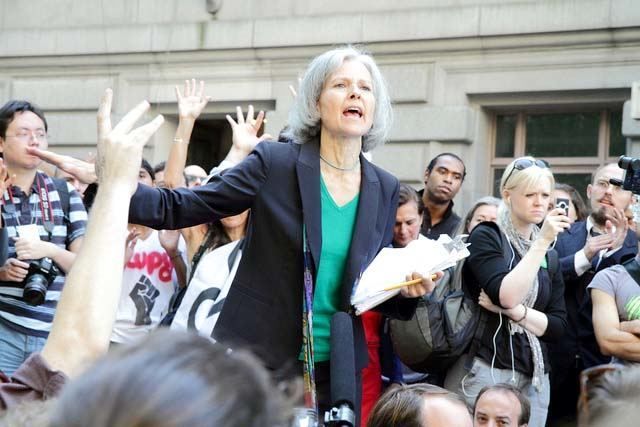 The main planks of Stein’s presidential platform include a “Green New Deal,” ending mass incarceration and police brutality, a $15 per hour federal minimum wage, a single-payer health-care system, universal public education and the abolition of student debt, breaking up big banks and nationalizing the Federal Reserve, initiating a global treaty to reverse climate change and ending extreme forms of extraction.

While Stein called the campaign of Vermont Sen. Bernie Sanders, who is now Hillary Clinton′s leading Democratic primary opponent, similar to her own, she expressed disappointment in his decision to run as a Democratic Party candidate, telling Democracy Now!:

Truthout sat down with Stein at the University of North Texas when she passed through Denton, Texas, for an environmental justice conference held in February 2015. Stein discussed the exploratory phase of her campaign, which included a “listening tour” of frontline communities struggling for justice, the Green New Deal promise and the politics of fear she says is holding back independent third parties. The following interview has been edited for length and clarity.

Candice Bernd: You recently [February 2015] announced the exploratory committee phase of your campaign, which has focused on a “listening tour” of frontline communities, including my own hometown here in Denton. Can you tell me about your goals for this tour?

Jill Stein: We very much wanted to be here in Denton for this conference, and to come to Denton and witness the miracle that took place here, and to be able to lift it up and talk about it. This is really, sort of in a nutshell, what [the Green Party] is trying to do, is to lift up these models of how we go forward. So, [Denton] is the very stop for us, coming from DC [where the exploratory committee was launched]. [Editor’s note: Stein is referring to the fact that Denton was the first city in Texas to ban fracking via a ballot referendum.]

You were previously the Green Party nominee in the 2012 presidential race. What compels you to again explore the possibility of seeking the party’s nomination for the 2016 race?

One of the reasons why I was compelled to jump in has to do with the political vacuum that became really evident in the 2014 midterms, which were really a loss for Democrats—but not a victory for Republicans. So, it was wanting to respond to this political vacuum as more and more people peel away from the Democratic Party, having essentially thrown in the towel on a party that long ago threw in the towel on us and our movements. There’s an incredible window of opportunity, and nature abhors a vacuum. If that political vacuum is not filled with a narrative of frontline struggle and triumph, it will be filled by other, more nefarious, narratives.

History demonstrates this amply. At times of great crisis things can go either way, and there are all kinds of makings of a fascist state that are underway already. So we felt it wasn’t something that could wait.

How is the Green Party funded, and how do we get money out of politics?

[The Green Party doesn’t] accept corporate money, and most of the Green parties have adopted a policy where they don’t accept money from people who are the officers, lobbyists or otherwise are the surrogates for a corporation. So there’s a firewall between us and corporations. If you’re a corporate CEO, you can contribute money to the Green Party, as long as you don’t hire a lobbyist. But if you are a CEO that hires a lobbyist, then you have a vested interest in a certain outcome, and that’s where we draw the line.

Most of our money comes from small donors, just everyday people. We don’t have super PACs and things like that. There’s a $2,600 limit to a donation. That is small potatoes, and we have very few people who contribute at that level. I personally think it’s great, if you have to work in the system, to have donors that you don’t have contact with because just asking creates an expectation of a repayment. I think it’s better that candidates are not in the business of fundraising at all. Anonymous online donations where people donate because they support the cause, not because they think you’re going to do something for them or there’s some implied payback, are really great.