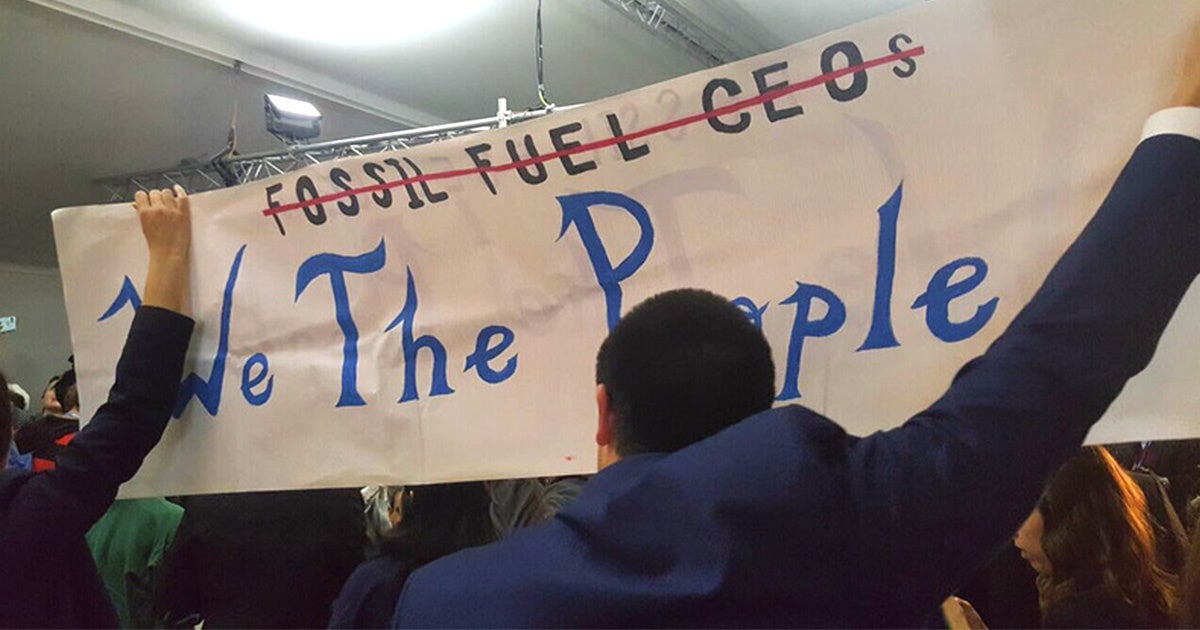 The U.S. delegation had organized the event, “The Role of Cleaner and More Efficient Fossil Fuels and Nuclear Power in Climate Mitigation,” to promote what many see as “false solutions” to climate change, such as nuclear, the misnomer of “clean coal” and carbon capture and storage or CCS.

It included speakers from, amongst others, Peabody Energy, the largest coal producer in the U.S. “The discussion needs to be not if we use coal but how,” argued Peabody.

However, the event was disrupted by activists singing a version of “God Bless the USA” and holding banners such as “We the people.” Participants were also heckled and booed.

Just after White House energy adviser George David Banks began the introductions, hundreds of activists stood up and started singing lyrics that included the lines: “So you claim to be an American / But we see right through your greed / it’s killing all across the world for that coal money / we proudly stand up and tell you / to keep it in the ground.”

Collin Rees, a campaigner from Oil Change International who was in the room, tweeted: “Protestors just shut down U.S.-sponsored event on “clean fossil fuels” at #COP23—hundreds of people streaming out, singing & chanting. Room is nearly empty now that they’re gone! #WeThePeople”

In total, the protest delayed it by seven minutes, but its impact went global. As the Washington Post noted, “The interruption underscores the controversy over the panel, as well as the broader animosity toward the Trump administration at the climate conference.”

Delegates lined up to criticize the event. Tuaoi Uepa, a delegate from the Marshall Islands, called it “ridiculous,” adding, “There’s no such thing as clean fossil fuels … We can’t move to the future like that.”

Michael Bloomberg, the former mayor of New York, argued in a Twitter post that “promoting coal at a climate summit is like promoting tobacco at a cancer summit.”

My statement on the U.S. fossil fuels event at #COP23 today. pic.twitter.com/ajEeoV0QEw

Washington State governor Jay Inslee, a Democrat who attended the event, also tweeted that the world “has rejected @realDonaldTrump‘s denial of climate science.”

Makoma Lekalakala, a delegate from South Africa, added, “They are climate criminals … We should stop them promoting false solutions to climate change.”

After being evicted, the activists continued their protest outside, singing: “Climate justice now! Keep it in the ground!”