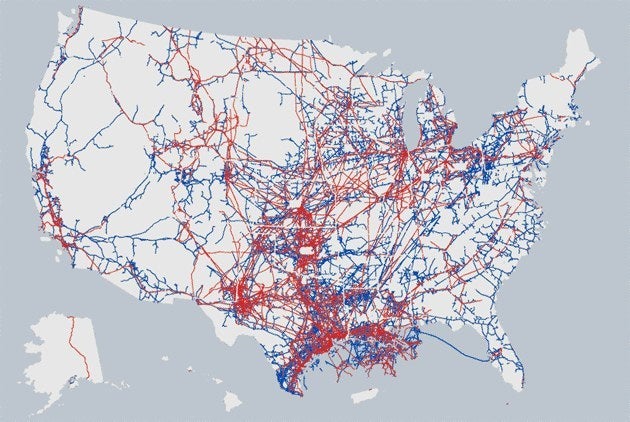 The president signed executive orders on Tuesday. One a day later, about 138,600 gallons of a diesel mix spilled from a broken pipeline in Iowa.

The pipeline is owned by Oklahoma-based Magellan Midstream Partners, which recently reached an $18 million settlement with the U.S. Environmental Protection Agency over alleged violations of the Clean Water Act, involving three pipeline spills in Texas, Nebraska and Kansas.

On Monday, reports emerged of a Tundra Energy Marketing Ltd-owned pipeline that spilled 52,830 gallons of crude oil onto aboriginal land in Saskatchewan, Canada. The spill happened on reserve lands of the Ocean Man First Nation.

Trump promises that pipelines such as the Keystone XL and the Dakota Access will help increase domestic energy production and create jobs. Energy companies also say that pipelines are safer and more environmentally friendly to move fuel compared to rail or trucks.

But Tundra and Magellan’s pipeline breaches only exacerbate the concerns of indigenous communities who are the ones who see these projects built then rupture in their backyards.

“Of course everybody’s not happy that it happened in the first place … You hope that these things will never happen to you or to your community and so yah, it was shock. It was a surprise,” Ocean Man Chief Connie Big Eagle told Canada’s Global News.

Big Eagle told Reuters that a local resident smelled the scent of oil for a week, located the spill and brought it to her attention on Friday. While no homes were affected, the spill is about 400 meters (1,320 feet) from the local cemetery, Big Eagle said. The Saskatchewan government was informed of the spill on late Friday afternoon, but the public was only notified of the spill on Monday.

According to a ProPublica report, America’s 2.5 million miles pipelines “suffer hundreds of leaks and ruptures every year, costing lives and money,” and these lines are only getting older. Not only that, the report notes that pipeline accidents have killed more than 500 people, injured more than 4,000 and cost nearly $7 billion in property damages since 1986.

“We are not opposed to energy independence,” Archambault said in response to Trump’s orders. “We are opposed to reckless and politically motivated development projects, like DAPL, that ignore our treaty rights and risk our water. Creating a second Flint does not make America great again.”

Trump’s executive orders will revive the highly contested DAPL that will cross through disputed Sioux land and the Missouri River, which is the tribe’s primary source of drinking water.

The Iowa spill was discovered Wednesday morning nearby the city of Hanlontown and did not reach water sources or cause injury to people or wildlife.

However, as Greenpeace researcher Jesse Coleman told the Guardian, while the Magellan leak is “not a major disaster” compared to other spills, it draws attention to the risks of pipelines.

“This really speaks to the central problem, which is that we’re not even surprised that this company spilled something out of a pipeline because it’s inevitable,” Coleman explained. “That’s what’s really frightening about these larger pipelines.”

“You can never really rehabilitate an area that got soaked in gasoline. Even this spill, it can’t be cleaned up,” Coleman added. “That gives you some idea of what will happen when the Dakota Access pipeline or the Keystone XL pipeline fails. It’s irreversible.”