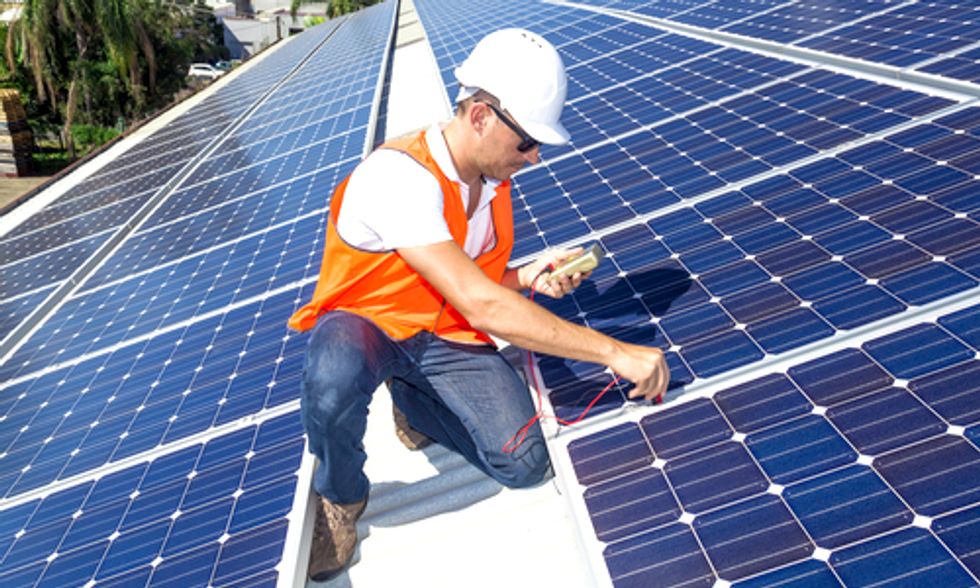 President Barack Obama released this week his much-anticipated regulations for controlling carbon emissions. Opponents are claiming the new rules are so onerous they will imperil the electric utility industry.

Actually, it's a little too late for that; solar power got there first.

The U.S. has barely begun to deploy solar panels for electricity. Even California gets only 1.3 percent of its electrons from the sun. Yet that modest start has upended the fundamental driver of utility profits—the demand curve.

A note by Bernstein Associates said that among utility executives who spoke at a recent industry conference, “the issue of whether solar is going to ramp in the U.S. was not raised. Instead, the discussion from utilities themselves went directly to the issue of how to reach an accommodation with this rapidly expanding and disruptive technology.”

Deregulated electricity generators make most of their profits on hot summer afternoons, when air conditioners and offices force grid operators to call up their most expensive electricity: natural gas “peaker” plants. Cheap to build but expensive to operate, these plants are essentially jet engines, producing power on demand for a few hours at a time. However, the entire industry benefits when peaker plants kick in, because every other generator, including the cheapest hydropower operator, receives the same top dollar during those peak hours.

Solar panels—whether utility scale or residential rooftop—generate maximum power on exactly those hot afternoons when demand peaks. What's more, they do so at no marginal cost; the sun is free. This reduces reliance on peakers, causing prices to fall across the board, including for customers without solar power.

This is what terrifies power companies. In California, the afternoon peak has effectively collapsed. CAISO, the state’s grid manager, projects that the peak will become an afternoon chasm, so low that even power plants designed to operate 24 hours a day as “baseload power” (nuclear energy is a good example) may face difficult decisions about when to operate.

The first victims among utilities will be generators that sell electricity from peakers and other plants in the open market. Soon, their plants will be needed only for the few hours around dusk when the sun is weak but demand is still relatively high.

The monopoly utilities will be hit next. Edison Electric Institute warns of “irreparable damages to revenues and growth prospects” due to the spread of distributed power generation from renewable energy sources.

Why is solar growing so fast? Because in the past three years, the cost of panels has been halved. As prices continue to decline, more rooftops will sprout polysilicon. At the same time, increased energy efficiency is cutting waste. A new generation of efficient appliances—no more heat-generating incandescent light bulbs, for one—is already shaving 7 percent off U.S. electricity demand.

Utilities used to be paid handsomely for keeping idle power plants ready for peak hours on those hot summer days. Now, as an increasing share of peak demand is met by solar panels owned or leased by customers, distribution utilities will simultaneously face slumping volume and lower prices.

To safeguard their revenue, utilities are trying to slow development of rooftop solar by refusing to pay what's called "fair value of solar"—essentially equitable prices for the electricity that solar panels generate. At the same time, utilities are increasing the fees they levy for access to transmission lines that provide customers with electricity at night.

That may encourage the nation's hundreds of thousands of rooftop solar owners to pair their solar panels with batteries to store power for the evening. As utilities raise prices—for both power and grid access—individual customers and even entire communities will end long-standing arrangements with traditional utilities altogether, as Chicago, Cincinnati and Marin County, California, have already done, citing discontent over poor utility service and prices.

Utility insiders call this, bluntly, “a death spiral.” In its report, Bernstein noted that utilities had only three choices: suppress growth of cheap solar by refusing to buy the power, raise the costs of connecting to the grid or become rooftop solar developers themselves. “We cannot think of a fourth option.”

There is one. Public utilities have an enormous advantage over the distributed solar companies that are disrupting their afternoon peak-load model. Solar power has very high capital expenses; the costs of borrowing determine who can deploy panels cheaply. Utilities, meanwhile, have access to the cheapest capital in the private sector.

In the very early days of electric power, utilities owned the arc lights that illuminated cities. Over time, they left those appliances to their customers and simply delivered power to the meter. They should return to that earlier, capital-intensive model now.

Why? Utilities are uniquely positioned to provide the capital, storage and connectivity needed to construct the cheapest possible clean-energy power system. They also generally have the best relationships with the customers for rooftop panels, the deepest knowledge of the market and, because they control the grid, a clear advantage in deploying electricity storage technologies such as batteries (another capital-hungry component of the renewable revolution). Apple and Amazon.com fight to accumulate information about their customers and what they consume; electric utilities have a meter in everyone’s house that delivers information on energy consumption free.

Utility regulators are likely to obstruct this transformation.

Becoming the financiers of electric services, rather than the generators and distributors of electrons, raises a host of challenges. Economists at CoBank recently predicted: “Electric utilities will probably see more change over the next 10 years than they did over the previous 100 years.”

A combination of industry conservatism and regulator skittishness could well prevent utilities from joining the revolution. The history of revolutions suggests that if the old regime resists, or joins the forces of change reluctantly, it will be swept away.

Too many environmentalists would cheer the demise of their traditional adversaries. That’s short-sighted. Utilities are not the impediment to clean energy; the continued hegemony of fossil fuels is. Coal, oil and natural gas usage will linger far longer, at enormous cost to the climate, if renewable sources of energy fail to obtain solid credit ratings and cheap borrowing capacity—both of which can be aided by utilities.

Climate campaigners don’t realize it yet, but they need utilities to finance and distribute a new generation of clean power. Their long adversarial relationship is coming to an end. A fruitful alliance is there for the making.

This article originally appeared on BloombergView.