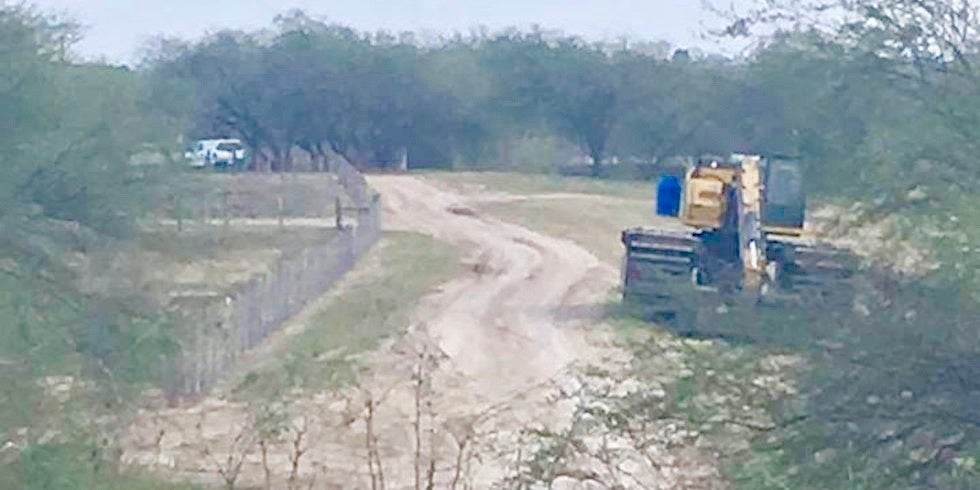 Construction equipment has arrived to build a
border wall through the National Butterfly Center in Mission, Texas, a protected habitat for more than 200 species of wild butterflies and other unique wildlife.

A planned 5.5 mile section of concrete and steel border wall that is already funded will cut off 70 percent of the
100-acre property. The barrier will be built on top of a levee of the Rio Grande that runs through the sanctuary.

An excavator and eight law enforcement units arrived around the center on Sunday, the National Butterfly Center wrote in a Facebook post.

“Effective Monday morning, it is all government land,” a Mission police department officer said, according to the post.

Bulldozing for the wall, which is expected to be about three stories tall, will commence any day now, the center wrote in another
post on Tuesday.

On Monday, as the construction equipment was off-loaded, roughly 35 local tribal members marched to the center in protest of the project, the
San Antonio Express-News reported.

Juan Mancias, the tribal chair of Carrizo Comecrudo, told the publication he did not expect construction to begin “this soon.”

“You come over here, you see the butterflies here, the animals here, and you also see gravesites that have been here since 1865,” Mancias said.

In federal documents seen by the publication, the barrier’s construction includes a 150-foot-wide “enforcement zone” that could negatively impact gravesites of Mancias’ ancestors buried at a nearby cemetery.

The butterfly center’s fate was sealed in December when the Supreme Court declined to hear a case brought by the
Center for Biological Diversity, the Animal Legal Defense Fund and Defenders of Wildlife to appeal a federal court decision that the Trump administration can waive 28 environmental laws including the Endangered Species Act, the Safe Drinking Water Act, the Native American Graves Protection and Repatriation Act, in order to build 33 more miles of wall, including the section that runs through the refuge.

The project was funded in the 2018 Omnibus spending bill in March.

In a recent Facebook Live with EcoWatch, Marianna Wright, executive director of the National Butterfly Center said morale on the ground was “pretty bad.”

“The potential impacts are devastating,” Wright continued. “Especially for animals like the ocelot where we have fewer than 80 known in existence.”

If you’d like to help, the center has started a
Go Fund Me to protect the site.