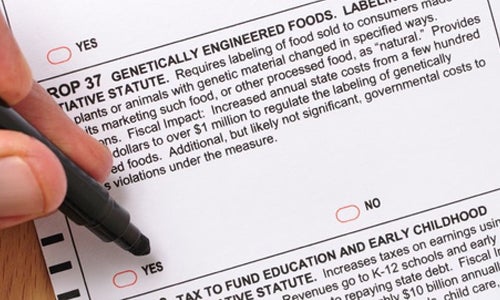 The final result from Washington State’s ballot initiative to label genetically-engineered foods was painfully close. A mere two percentage points (38,000 voters) made the difference between yes and no. Similarly, last year in California, the Yes side lost by a narrow margin. Also in both states, early polling showed a strong lead, which was then chipped away at by a barrage of ads from the No campaign. Lying underneath this same pattern is an ugly industry play book that explains how voters can change their mind so easily. 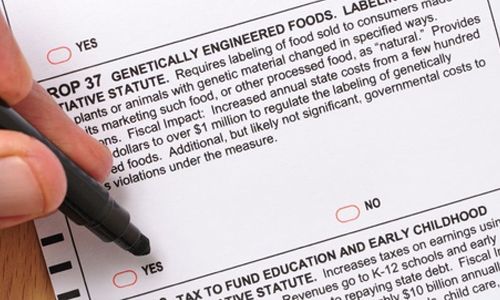 Before the genetically engineered (GE) food labeling movement marches on to the next state, we need to examine and understand these industry tactics to better prepare for them. For example, the same firms were hired to run the No campaign in both California and Washington State. They even used the same logo colors. So it should come as no surprise that the same tactics and talking points were used. Industry is especially good at fear-mongering with these themes:

The No campaign in both California and Washington State had a field day with how the language contained exemptions. Never mind the lack of logic here: Would Big Food and Big Ag be in favor of GE labeling if only it applied to every single kind of food? Obviously not; no matter what the language, industry will attack and distort it. Moreover, the exemptions follow current law in other countries and make good sense.

Another important tactic is the use of outside experts to carry industry’s message. Since it wouldn’t fly with the public to put the CEO of Monsanto in a TV ad, instead the campaign has to hire others, such as former government officials or doctors wearing white coats to claim being authorities on GE food labeling.

While the tactics in California were egregious and unethical, corporate lobbyists in Washington State went even further by breaking the law, and with little consequence. Washington State requires that donors to political campaigns be clearly disclosed. As I explained at the time, the state’s Attorney General Bob Ferguson sued the lobbying group, Grocery Manufacturers Association, for failing to disclose its donors to the No on 522 campaign. The major food brands such as those owned by Coca-Cola, Nestlé and PepsiCo didn’t want to hurt their PR image, so laundered donations through its trade group instead. This clear violation of state law meant that $11 million—half of the total $22 million that the opposition collected—was donated illegally. Given the close outcome, that money could have easily made the difference in the election. And yet the media seemed remarkably unimpressed with this development, even in the middle of a highly-contested campaign. Has dirty politics really made the press that cynical?

Ultimately, just as in California, enough Washington State voters were persuaded to vote against their own interests thanks to a constant barrage of TV ads that repeated the No campaigns’ scare tactics. It’s very challenging to win a campaign against an industry that will lie, cheat and steal its way to victory.

Contrary to what some Monday morning quarterbacks are arguing, we didn’t lose in Washington State (or California) because the initiative was badly worded or because of too many exemptions or any of the other silly attacks that industry makes on every single policy proposal they don’t like. Even smart people can be fooled by powerful propaganda. No matter what the language, industry will find a way to attack it with fear using twisted arguments.

So where does the GE food labeling movement go from here? Already, proponents are collecting signatures for ballot measures in Oregon and Colorado for 2014. And other states are moving forward in their legislatures.

The consumer right to know message remains the most broad-based and politically viable approach. For example, this concept helped propel the victory in Connecticut, which became the first state to pass a GE food labeling law back in May. (At the press conference celebrating the passage of the bill there, U.S. Senator Richard Blumenthal said that “consumers have a right to know”). Of course we need better strategies to deal with industry tactics, but with each attempt, the public becomes more and more educated about this issue. And proponents also learn valuable lessons, such as needing more funding to go up against the massive bank accounts of the biotech and junk food corporations.

As efforts move forward in other states, whether through ballot measures or state legislatures, we must also remember to keep our eyes on Washington DC. The junk food lobby has made its strategy clear: industry wants a “federal solution” that will likely be weak, while removing the ability of states to go further. The good news is that the food movement is growing, and as a result the major food brands remain vulnerable to public scrutiny. (See the current campaign to boycott Coca-Cola products). By keeping up the pressure at both the state level and federal levels, we are sending the message to our elected representatives that caving in to industry is not acceptable. And as the movement continues to develop and learn lessons from its defeats, the victories will come more often.