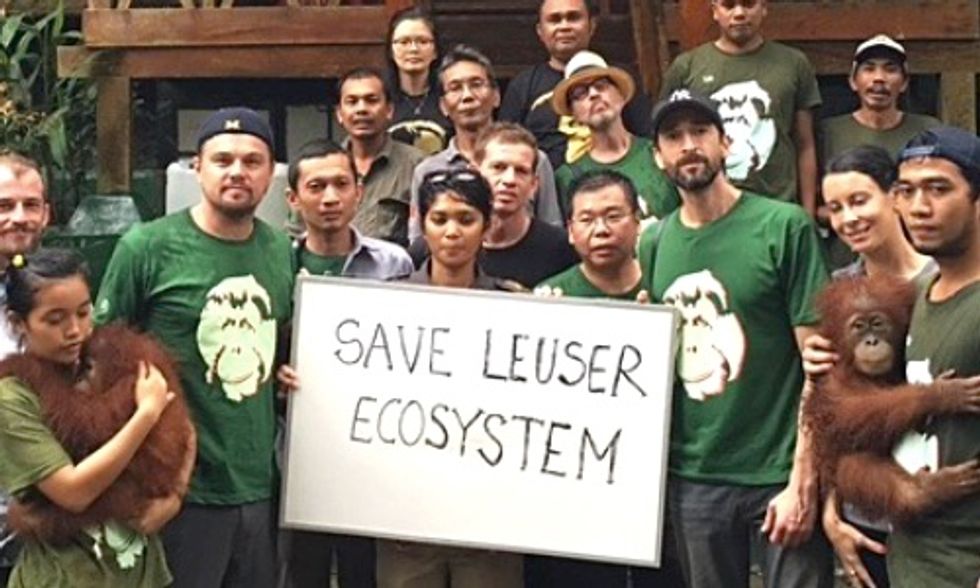 Leonardo DiCaprio has been threatened with deportation by officials from the Indonesian government after the actor's recent visit to the Leuser Ecosystem and his vocal stance against the area's industrial development for palm oil, according to several Indonesian publications.

DiCaprio has been reportedly accused of running a “black campaign” to discredit the country's palm oil industry, as local English websites Coconuts Jakarta and Tempo reported via Indonesian news outlets.

"If there are statements that discredit the government and the interests of Indonesia, he could be deported," Director General of Immigration Ronny F. Sompie is quoted as saying in Jakarta today.

Since DiCaprio is on a tourist visa, if it can be proven that he's "creating public disturbances and harming the state's interest, the Immigration is ready to deport him," Ronny warned, adding that his department will be monitoring DiCaprio's activities in Indonesia.

According to Ronny, "the department has the authority to deport foreigners that violate their visa terms as stipulated in Law No. 6/2011 on Immigration."

Incidentally, DiCaprio's team confirmed to EcoWatch that he has already left the country, meaning any deportation threats would not apply.

DiCaprio and fellow actors Adrien Brody and Fisher Stevens toured Mount Leuser National Park on Sunday where they stopped by the park’s research facility. The Oscar winner and prominent environmental activist posted photos of his visit on social media and warned in his posts that the expansion of palm oil plantations in Leuser are a major threat to Sumatra's iconic wildlife species. As DiCaprio noted, the rainforest is the last place on Earth where Sumatran orangutans, tigers, rhinos and elephants coexist in the wild.

Today, he posted a new Instagram photo of himself with a critically endangered Sumatran orangutan.

"If we don't stop this rampant destruction, the Leuser Ecosystem and the Sumatran orangutans that call it home could be lost forever," the caption says.

On his Twitter account, The Revenant star voiced his support of the Forest, Nature and Environment of Aceh (HAkA), a Sumatra-based NGO that works to protect and restore the priceless ecosystem as well as a link to a Change.org petition that urges Indonesian President Joko Widodo to cancel the Aceh provincial government’s Spatial Land Use Plan, “which would open Leuser’s forests up to clearing for logs, mining and oil palm,” Mongabay reported.

According to Tempo, Asmar Arsyad, an Aceh-based palm oil businessman, has responded to DiCaprio's messages.

"He should be campaigning for environmental conservation in the Amazon jungle that is being depleted by soy oil plantations," Asmar said.

"His goal is clear. He will definitely take a shot at oil palm plantations, and wrap it with environmental issues," he said, adding that DiCaprio's visit was facilitated by environmental NGOs.

"I'm urging the BIN [State Intelligence Agency] chief and the Police chief to take firm action against those groups. I'm also asking the Immigration to deport Leonardo if he is proven to be black-campaigning out oil palm industry," he added.

As EcoWatch mentioned previously, DiCaprio’s support of Leuser coincides with his speech at the World Economic Forum in Davos earlier this year, where he announced his philanthropic foundation’s $15 million commitment to environmental projects, including one that protects the Leuser Ecosystem from what DiCaprio described as the “invasive and destructive practices” of the palm oil industry.

The iconic Leuser Ecosystem, located in the provinces of Aceh and North Sumatra, consists of 6.5 million acres of tropical lowland rainforests, mountains and peatlands.

Leuser is not only a biodiversity hotspot, it provides more than 4 million people with water, clean air and disaster mitigation. The ecosystem is also critical in helping to regulate the Earth’s climate by absorbing and storing carbon in its lowland rainforests and peatlands.

Local Aceh citizens have filed a class action lawsuit to protect the Leuser Ecosystem. Learn more about the movement to protect Leuser here: