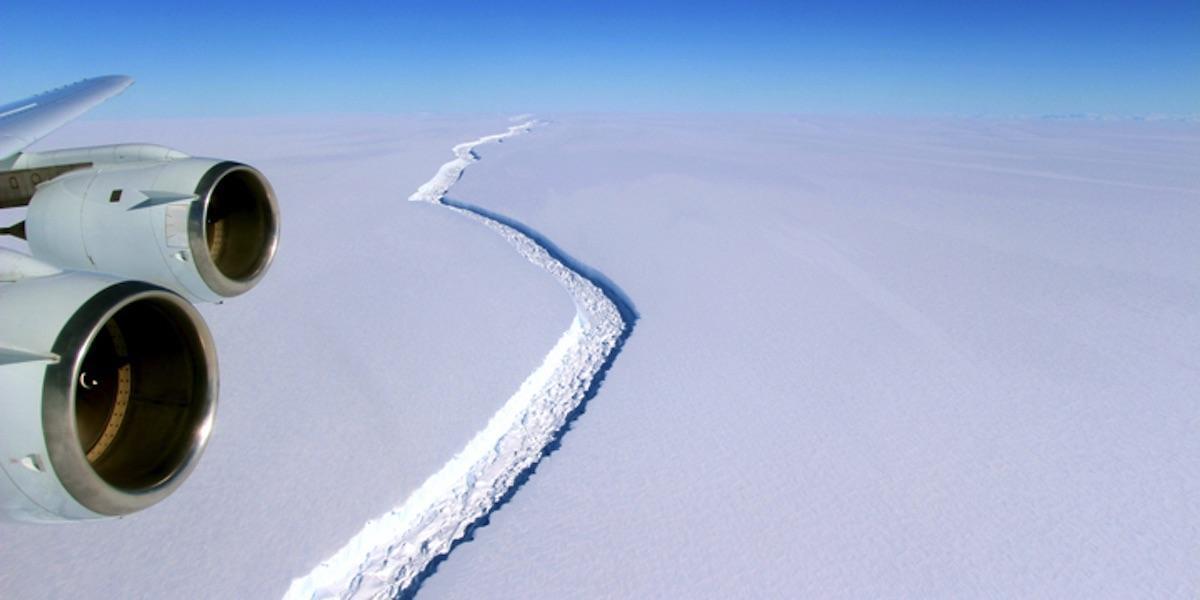 The widening crack in Antarctica’s
Larsen C Ice Shelf has grown even longer. An iceberg the size of Delaware is now precariously hanging on to the main ice shelf by 8 miles of ice.

Scientists with the Antarctic research group
Project Midas report that the rift lengthened by another 11 miles between May 25 and May 31 2017—”the largest jump since January” when the crack was 12 miles.

Until recently, the crack was running parallel to the edge of the ice shelf but it took a “significant” turn towards the ocean, “indicating that the time of calving is probably very close,” the Project Midas team
wrote.

“The rift has now fully breached the zone of soft ‘suture’ ice originating at the Cole Peninsula and there appears to be very little to prevent the iceberg from breaking away completely,” Project Midas wrote.

After it finally breaks off, the Larsen C ice shelf will lose more than 10 percent of its area, leaving the ice front at “its most retreated position ever recorded.”

“This event will fundamentally change the landscape of the Antarctic Peninsula,” the team stated. “We have previously shown that the new configuration will be less stable than it was prior to the rift, and that Larsen C may eventually follow the example of its neighbor Larsen B, which disintegrated in 2002 after a similar rift-induced calving event.”

Calving events are normal, as NASA explained, but “calving that happens faster than a shelf can re-advance can mean trouble for an ice shelf.”

As EcoWatch reported previously, two previous sections of the Larsen ice shelf have broken off and disappeared into the sea. Larsen A collapsed in 1995. Then in 2002, Larsen B began to rapidly break apart. Within six weeks, a 1,235 square mile chunk of ice slipped away, which scientists attributed to warmer air temperatures. Prior to that, the Larsen B ice shelf had been stable for 12,000 years.

It’s unclear if Larsen C will respond in a similar ways. Project Midas is monitoring the development of the rift and will assess its ongoing impact on the ice shelf.

The loss of this portion of the ice shelf will not raise sea levels since it is already floating on the water. However, as these ice shelves disintegrate, the land-locked glaciers they hold back may begin sliding into the sea. If all of the ice the Larsen C ice shelf holds back slides into the ocean, it will raise sea levels globally by four inches.