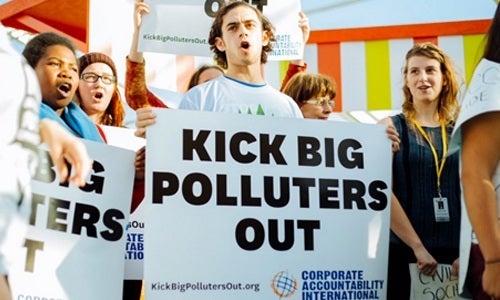 The first days of climate talks have played out some predictable story lines. Global North leaders like President Obama have made lofty commitments. Global South governments have demanded less lip service and more action. But yesterday: a new wrinkle. Civil society is advancing an urgent new agenda to address the “elephant in the COP.”

On the heels of a series of reports exposing the extent to which climate policy is coopted, undermined and blocked by polluting industries, there is a growing chorus to kick big polluters out. Already, 550,000 have taken action and there remains a necessity of getting language in the Paris Agreement that curbs this undue industry influence.

The event was flanked by a civil society action in the Climate Generations Area of the meeting where dozens gathered chanting and calling for polluters to be shown the door.

The Paris meetings have come under heavy scrutiny from media and environmental groups for their unprecedented level of corporate sponsorship and corporate capture from some of the world’s biggest polluters. Equally of concern to many is the immense imbalance of power in the negotiations between Global South and Global North governments who have been heavily influenced by the fossil fuel industry.

“Inviting some of the world’s biggest polluters to pay for the COP is akin to hiring a fox to guard a hen house,” said Patti Lynn, executive director of Corporate Accountability International. “We must eliminate this conflict of interest before COPs become corporate tradeshows for false market-based solutions.”

To expose this conflict of interest, the campaign released a new report, Fueling the fire: the big polluters bankrolling COP21, on the environmental destruction and public policy interference of the leading COP21 sponsors. By detailing the corporations’ abuses to the environment and aggressive lobbying to undermine environmental policy, the report lays bare the conflict of interest inherent in allowing such sponsorship to exist.

This is what building power looks like! Thanks all who joined this powerful action to kick #BigPollutersOut #COP21 pic.twitter.com/S3XZSxDNus

In addition to policy interference, the report exposes the reality behind the green facade advanced by the COP sponsors. Engie, an early sponsor of COP21, is a polluter with few rivals. In 2014, the corporation was directly responsible for more than 131 megatons of greenhouse gas emissions, equivalent to the pollution emitted from driving around the globe 12 million times.

“In Nigeria, the deadly effects of Shell’s unholy alliance with our government has left deep scars on our country,” said Philip Jakpor from Environmental Rights Action/Friends of the Earth Nigeria, a member of the global coalition, “Whether it’s sponsorship or back-door lobbying, we must protect climate policy making from those who wish to undermine it.”

Corporate sponsorship of the treaty meetings is just one example of the many ways in which corporate cooptation of and interference in climate policy has become commonplace. In both the UN Framework Convention on Climate Change (UNFCCC) and in national governments, the fossil fuel industry has inserted itself as a stakeholder in the process in order to drive policymakers toward industry friendly “solutions” and delay or water down policy.

The Lima-Paris Action Agenda (LPAA), a joint project of the Peruvian and French COP presidencies, the Office of the Secretary-General of the United Nations and, the UNFCCC Secretariat, is a series of commitments and initiatives involving more than 1,700 corporations including Shell, Total, ExxonMobil and other big polluters. In Paris, the Secretariat has made the LPAA a primary focus, even folding it into the agenda and formal outcomes of the talks. The project’s “open-door” policy has welcomed the participation of not only the world’s largest fossil fuel corporations, but also corporations involved in coal mining and hydraulic fracturing or “fracking” as well transnational energy utilities.

In the final week of the treaty meetings, the Kick Big Polluters Out coalition will continue to challenge the myriad avenues big polluting industries use to obstruct and coopt the process. The campaign is supported by a global coalition of groups, including 350.org, Friends of the Earth International, the Demand Climate Justice Network and the Climate Action Network.