It's Our Generation, It's Our Choice: Climate Justice Now 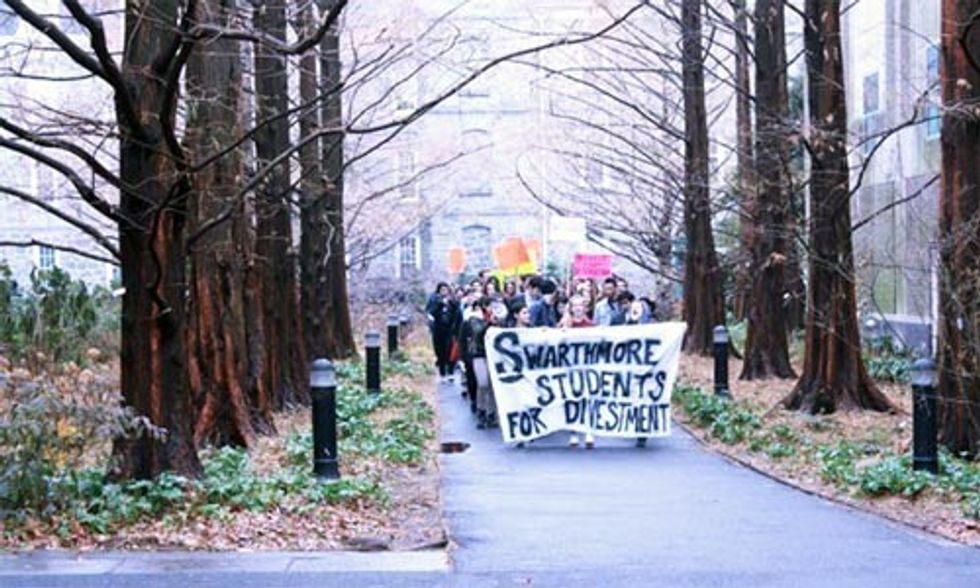 When I learned about climate change for the first time in middle school I was stunned; stunned that I hadn’t found out before, that this wasn’t something my parents talked about every day. The atmosphere might heat up to to the point that the earth would become uninhabitable? I could not comprehend why everyone in society wasn’t running around scheming of ways to ensure our survival on this planet.

When I got to college, I joined Swarthmore Mountain Justice, the on-campus group campaigning for divestment from fossil fuels.

And what would this mean for my home on the outskirts of Austin, Texas? Already, our well water had run out one summer. We went for quite a while without being able to shower or flush the toilet until we had the money to get the well dug a little deeper to reach the aquifer below. I wondered what a hotter planet would mean for our water system: how many more times would we need to dig deeper? How could a summer even hotter than our already scorching days, hot enough to fry an egg on the sidewalk, be habitable?

I tried to think about what I could do to minimize the harm I caused personally through my carbon footprint. I tried to save every page I was handed in school to write my notes on the backs. I recycled and composted obsessively, and wondered whether I could save water by hand washing clothes or energy by line drying. I would cringe every time we sat in traffic, imagining all the tiny particles of carbon our car was coughing out into the atmosphere, slowly eroding the chances of future generations to experience the lushness of a dewy, green spring.

Yet ultimately, the task at hand felt impossible. I lived thirty minutes outside Austin in an area where public transportation does not exist. My family did not have the money to live in the city, so this meant driving twenty minutes to school every day and that there was no way for me to reduce these emissions. The lack of public transportation in Texas simply does not allow most citizens to live in a way that could be considered “environmentally conscious.”

Gradually I realized—our highways and suburbs were never meant to be compatible with a sustainable future. The system was designed to necessitate fossil fuel dependence. It is no coincidence that Exxon has been cowering under climate denialism for decades for the sake of rogue profit. Exxon’s thirty year long campaign to spread doubt about basic climate science has undermined efforts to prevent runaway climate change and has cost millions of lives. Those hit the hardest by climate disaster are communities of color, communities of low economic status, women and young people. Fossil fuel companies stand to gain the most by stifling the stories of those in the Global South whose resources they exploit, whose water and air they poison, and whose lives the media outlets might fail to mourn when they are swept away by every-intensifying natural disasters. It will take all of us, fighting together and demanding a just and sustainable transition, to turn the tides on environmental racism and the devaluing of black, brown and immigrant lives.

When I got to college, I joined Swarthmore Mountain Justice, the on-campus group campaigning for divestment. For the first time, I feel that I have power in my hands to effect change. For so long, I worried that the things I could do on my own to combat climate change were not enough, but I have seen incredible progress in the work we have done as a collective. Together we can leverage formidable power. Joining together with other students, we will demand the systemic and institutional changes from our leaders we need to ensure a sustainable future. We will demand a just transition away from environmental racism, and an end to the laws that tear families apart and reinforce the illusion that we are anything less than a global community.

As young people, we have the right and the power to create the world we would like to see—world which sustains life; a world which does not discriminate, commit violence or value a life less based on race or class, nationality or immigrant status. The need to see these changes come about has never been so urgent, and I have never felt more excited to join with other students, to take to the streets and demand that politicians take real leadership on the critical issues of our generation.

If that’s a vision you want to be part of, sign up to join the action on Nov. 9th in Washington, DC.

This blog post was written by Sophia Zaia, a student organizer with Swarthmore Mountain Justice, on why she’s joining the Our Generation, Our Choice mobilization.