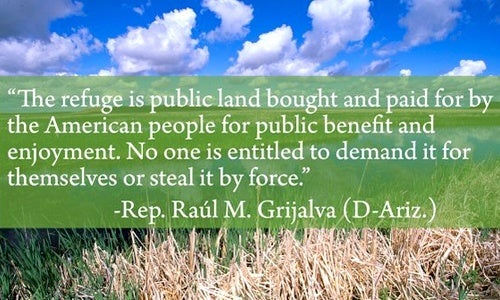 Last weekend, when an armed group of men in eastern Oregon occupied a building within a National Wildlife Refuge to protest the jailing of a rancher for federal crimes, we immediately went to the Anti-Environmental Archives to do some research. Lo and behold, the archives contain lots of documents about the Malheur National Wildlife Refuge and lots of information on the decades-long conflict between ranchers like Dwight Hammond who want to run their cattle into protected areas and federal authorities seeking to uphold the law and protect the area from despoliation.

The refuge, home to millions of migratory birds, was established in 1908 by former President Theodore Roosevelt. Starting in March, according to the Fish & Wildlife Service website, visitors will see the annual torrent of “greater sandhill cranes, tundra swans, northern pintails and white-fronted, snow, Ross’ and Canada geese … American white pelicans, double-crested cormorants, western grebes, long-billed curlews and American avocets” along with numerous songbirds. Must be something to see and hear. Meanwhile, there are a few non-migratory armed thugs in cowboy hats.

We published the Anti-Environmental Archives in April 2015, a catalog of thousands of original documents published by and about the groups involved in the Wise Use Movement. You can search the archives for yourself here.

Much of the media coverage of the Oregon situation has been light on the long history of anti-federal government agitation in the West. Some reporters have described the “Sagebrush Rebellion,” the resistance to federal control of Western lands that originally dates back to the early 1990s and was emboldened by the Reagan Administration and Interior Secretary James Watt.

Missing from coverage is the mention of the pro-logging, pro-ranching, pro-mining Wise Use Movement, which escalated in the early 1990s during the Clinton Administration. These local fights eventually led to the election of such extremists as Republican of California Rep. Richard Pombo who authored the book This Land is Our Land: How to End the War on Private Property in 1996. The most memorable was over the protection of the endangered Spotted Owl in western Oregon and Washington state, which restricted logging of old growth timber. But the fight with the Bureau of Land Management over grazing “rights” was at the heart of Wise Use conflict. In fact, Western ranchers are recipients of the one of the largest federal welfare programs, (approximately $500 Million in taxpayer money in 2014), getting below-market-value leases to public lands to graze their cattle.

Much of the reporting on the armed occupation in Oregon has also failed to go very deep on rancher Dwight Hammond, the inspiration for the protest that begat the armed occupation of the refuge last weekend. Its important context that Hammond has been at war with the Malheur National Wildlife Refuge and federal authorities going back to the 1970s and that he was arrested in the early 1990s for blocking a fence being built on the Refuge border. These incidents were well before the 2001 arson, for which they were convicted and for which Hammond and son are now in prison. Thus the Hammonds became hero/martyrs of the Wise Use Movement more than 20 years ago.

The right wing media is playing this like a righteous fight against the oppressive federal government. The racial hypocrisy in press coverage of this mess is not unnoticed. Will we see a Republican candidate make anti-environmental anti-federal land ownership promises?