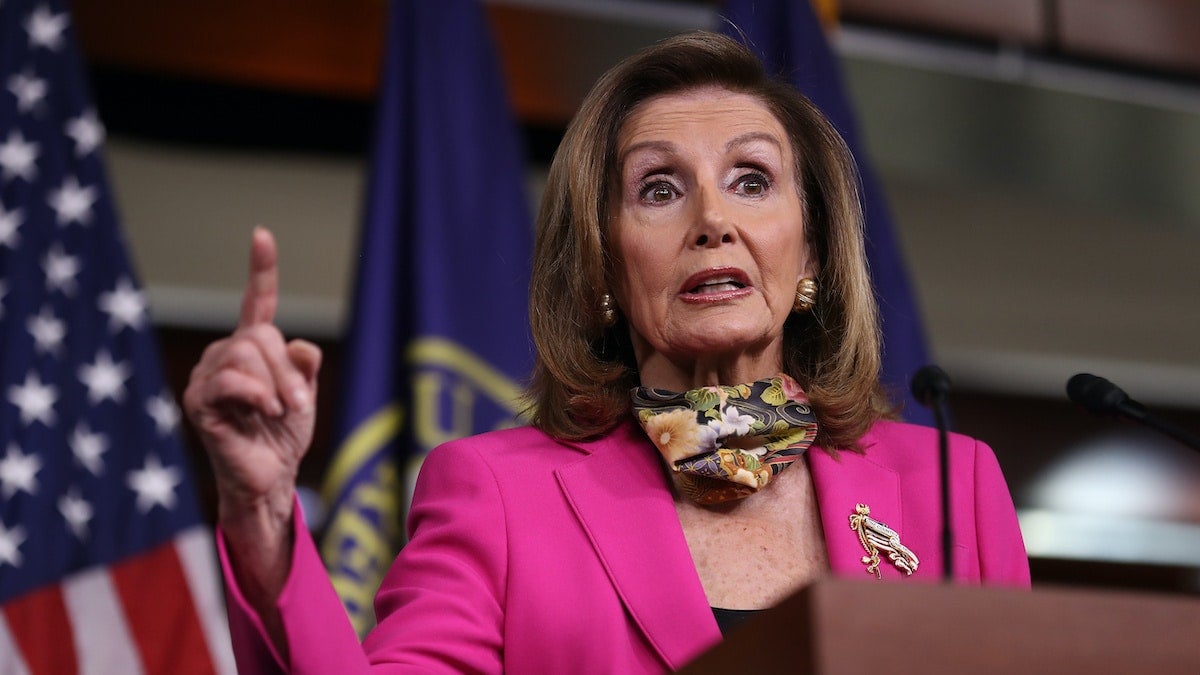 Speaker of the House Nancy Pelosi (D-CA) talks to reporters during her weekly news conference at the U.S. Capitol Visitors Center on Sept. 18, 2020 in Washington, DC. Chip Somodevilla / Getty Images

The House of Representatives passed a sweeping bill to boost clean energy while phasing out the use of coolants in air conditioners and refrigerators that are known pollutants and contribute to the climate crisis, as the AP reported.

The 900-page Clean Energy and Jobs Innovation Act passed the House in a 220-185 vote. The bill, if it were approved by the Senate and signed by the president, would increase the energy efficiency standards for building and boost research and investment in the development of solar, wind, geothermal and hydroelectric power, according to The Hill.

The Clean Energy and Jobs Innovation Act was crafted after negotiations with the Senate. It is full of agreed upon, “practical and achievable clean energy policies that are possible for us to achieve this year,” said Frank Pallone, Democrat from New Jersey and chair of the Energy and Commerce Committee, as Utility Drive reported.

Pallone added that the bill would “modernize our energy system, create jobs and take positive steps towards addressing the climate crisis,” as the AP reported. He called it “one of the most impactful steps we can take now to create manufacturing jobs and boost our competitiveness, all while protecting our environment.”

The effort to pass the bill, however, may have been in vain. Earlier in the week, The White House said the president’s advisors would suggest he veto the bill. “With the news of Justice Ginsburg’s passing, I cannot even venture a guess of how the next few weeks and months may play out,” said Rep. Paul Tonko, a Democrat from New York in speaking to a National Clean Energy Week symposium, according to Utility Drive.

And yet, some in Congress were somewhat hopeful that the bill had a chance of becoming law. The Hill reported that a House Democratic aide believed that if the Senate passes their similar bill, then the respective committees can work together to settle the small discrepancies between the two bills.

The bills that are in the House and the Senate are modest in their ambition, which House Democrats acknowledged.

“I want to give a clear-eyed assessment: This bill is not going to stop climate change,” said Tonko, as the AP reported. “But it is a good opportunity to make good and sometimes necessary changes to programs, which might make it easier to do a bigger, more ambitious bill in the near future.”

The National Resource Defense Council (NRDC), an advocacy group, examined the bill and praised it in a blog post as “a needed step forward to ensure future climate action will be built from a solid foundation.” It added that this bill is unique from past legislation because it “has opened the door for better ideas on how to spur progress in clean energy innovation.”

And yet, the NRDC noted that the funding for clean energy fell behind the money spent for fossil fuels and nuclear energy. “This bill is very promising but it’s obvious that it won’t provide the transformative change we need to win the fight against climate change and protect our environment,” the NRDC wrote.

House Speaker Nancy Pelosi praised the bill for taking a step to thwart the climate crisis and putting the wheels in motion to start legislation aimed at climate action.

“It takes actions that scientists, researchers and experts tell us is needed by launching the research and development needed to unleash a clean energy revolution and reduce pollution in our communities, making a bold down payment for future climate action by modernizing America’s energy innovation infrastructure,” she said, as The Hill reported.