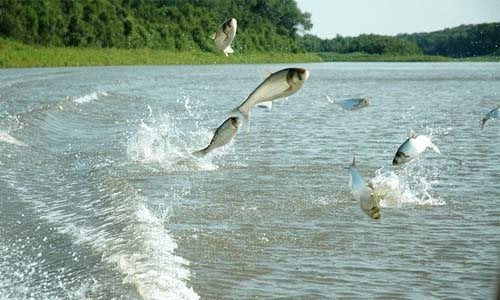 Lake Erie is bountiful in highly prized walleye and rainbow trout. But populations of these commercially important fish could plummet if Asian carp manage to invade the lake, according to a new report.

In the groundbreaking study, scientists from the National Oceanic and Atmospheric Administration (NOAA) and the University of Notre Dame found that carp, which are moving at a rapid pace toward the Great Lakes, could make up one-third of all fish in Lake Erie by weight within 20 years if the invasive species overcomes efforts to keep it at bay.

Voracious eaters, Asian carp feed on plankton, which are tiny organisms which form the basis of the food web. Small fish that live in Lake Erie—the emerald shiner, gizzard shad and rainbow smelt—also feed on plankton and their numbers could fall dramatically if they have to compete with carp for food, according to the study. This would hurt the commercially valuable walleye, which eat the smaller fish.

Two Asian carp species found in the U.S.—the bighead carp and silver carp—have reached watersheds near the Great Lakes. In October 2015, U.S. Fish and Wildlife Service scientists discovered that silver carp had advanced a record 12 miles up the Illinois River in just one month, traveling 66 miles toward Lake Michigan since the beginning of 2015.

“Back in the 1970s, the carp were introduced purposely to clear out catfish farms in some ponds in Arkansas,” Ed Rutherford, coauthor of the study and a fisheries biologist with the NOAA Great Lakes Environmental Research Laboratory, said. “They escaped from there during some flooding and made their way into the watershed of the Mississippi and are now very abundant in the Mississippi and the Illinois Rivers.”

The carp now make up about 80 percent, by weight, of all the fish in those rivers, he said, but computer modeling study shows that the potential impact on Lake Erie would not be as extreme.

“That’s because Lake Erie has more potential predators for young Asian carp than in those rivers,” Rutherford said.