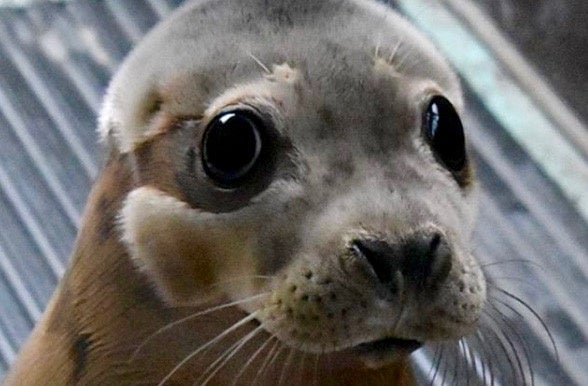 On Nov. 21, Seal Rescue Ireland — Ireland’s only seal rescue center — found five to six week old Sesame underweight at only 13 kilos with deep lacerations all over her body. Waves from big storms had likely thrown her against the rocks when she was less than 2 months old. Today she’s at a healthy weight of 42 kilos and ready to return home.

“It’s really encouraging to see her take straight to the waves,” said Sam Brittain, animal care manager. “The last time she was in the sea was probably a bit of a traumatic experience for her.”

Sesame was initially set to return to the sea on April 13, as reported on EcoWatch Live during a tour of their facilities:

“In a natural turn of Murphy’s Law, she unfortunately was delayed because another big storm came through,” said Brittain. The release was rescheduled and he explained that the frequency of storms is increasing because of climate change. “It’s becoming a big problem for the grey seals.”

Volunteers gathered round to demonstrate their support during the release and cheered Sesame on once the cage was opened. “We’re really happy with how many people showed out to give her a good welcome back to the sea” said Brittain.