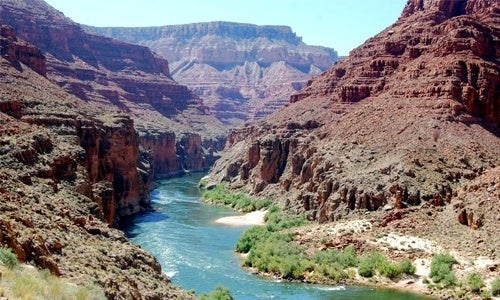 Even one of America’s most iconic landmarks is not immune from pollution. The Grand Canyon segment of the Colorado River is suffering from exposure to toxic chemicals, including mercury, according to a study from the U.S. Geological Survey (USGS).

“Concentrations of mercury and selenium in Colorado River food webs of the Grand Canyon National Park regularly exceeded risk thresholds for fish and wildlife,” the USGS team said in a statement. The concentrations of toxins in some fish were so high that they could be harmful if consumed by wildlife or humans. The researchers noted that their findings build further evidence that even extremely remote ecosystems, such as this stretch of the Colorado River, are “vulnerable to long-range transport and bioaccumulation of contaminants.”

“Managing exposure risks in the Grand Canyon will be a challenge because sources and transport mechanisms of mercury and selenium extend far beyond Grand Canyon boundaries,” said Dr. David Walters, lead author of the study.

Researchers took samples from six sites along the nearly 250 miles of the Colorado River downstream from Glen Canyon Dam within Glen Canyon National Recreation Area and Grand Canyon National Park in the summer of 2008. They found that “mercury and selenium concentrations in minnows and invertebrates exceeded dietary fish and wildlife toxicity thresholds.”

Though researchers point out that the number of samples was relatively low, bigger trout did not seem to be as affected.

“The good news is that concentrations of mercury in rainbow trout were very low in the popular Glen Canyon sport fishery, and all of the large rainbow trout analyzed from the Grand Canyon were also well below the risk thresholds for humans,” said co-author of the study Dr. Ted Kennedy.