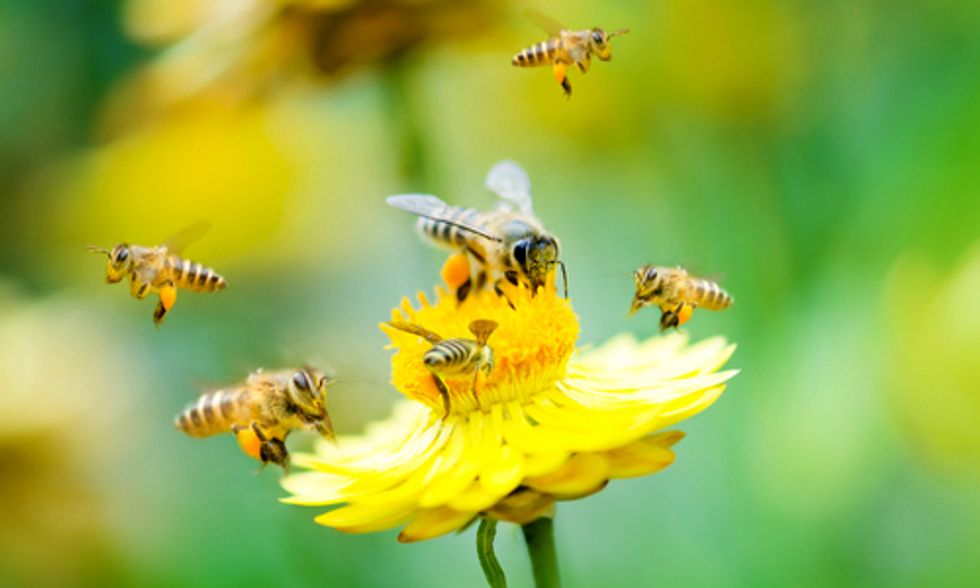 No matter how you feel about Ontario’s proposal to restrict use of neonicotinoid insecticides on corn and soybean crops, we can all agree: bees matter. But as important as bees are, there’s more at stake. Neonics are poisoning our soil and water. This problematic class of pesticides needs to be phased out globally to protect Earth’s ecosystems. By implementing restrictions now (the first in North America), Ontario will have a head start in the transition to safer alternatives.

The industry’s objection to restrictions on neonics is eerily similar to big-budget advertising campaigns to create a smokescreen thick enough to delay regulatory responses to the obvious harm caused by cigarettes.
Photo credit: Shutterstock

Not surprisingly, Ontario’s proposal has drawn the ire of the pesticide industry.

Neonics have only been around for a couple of decades, but annual global sales now top $2.6 billion. They were initially embraced because they are less directly toxic to humans than older pesticides and are effective at low levels, reducing the volume used. They can be applied to seeds and are absorbed into the plant, which then becomes toxic to insect pests, reducing the need to spray.

We now know these characteristics are the problem. These chemicals are nerve poisons that are toxic even at very low doses and persist in plants and the environment. They affect the information-processing abilities of invertebrates, including some of our most important pollinators.

Bees have borne the brunt of our unfortunate, uncontrolled experiment with neonics. Beekeepers report unusually high bee death rates in recent years, particularly in corn-growing areas of Ontario and Quebec. Virtually all corn and about 60 percent of soybean seeds planted in Ontario are treated with neonics. A federal Pest Management Regulatory Agency investigation concluded that planting neonic-treated seeds contributed to the bee die-offs.

Europe reached a similar conclusion and placed a moratorium on the use of neonics on bee-attractive crops, which took effect last year.

Critics emphasize that other factors—including climate change, habitat loss and disease—affect pollinator health. But these factors are not entirely independent; for example, chronic exposure to neonics may increase vulnerability to disease. A comprehensive pollinator health action plan should address all these factors, and scaling back the use of neonics is a good place to start.

Apart from the immediate and lethal effects on bees, neonics represent a more subtle threat to a wide range of species. The 2014 Worldwide Integrated Assessment of the Impacts of Systemic Pesticides, the most comprehensive review of the scientific literature on neonics, pointed to effects on smell and memory, reproduction, feeding behaviour, flight and ability to fight disease. Jean‐Marc Bonmatin, one of the lead authors, summarized the conclusions:

“The evidence is very clear. We are witnessing a threat to the productivity of our natural and farmed environment equivalent to that posed by organophosphates or DDT. Far from protecting food production the use of neonics is threatening the very infrastructure which enables it, imperilling the pollinators, habitat engineers and natural pest controllers at the heart of a functioning ecosystem.”

Is there some uncertainty involved in calculating these risks? Absolutely. Uncertainty is at the heart of scientific inquiry. The precautionary principle requires that where there is threat of serious or irreversible harm to human health or the environment, the absence of complete scientific certainty or consensus must not be used as an excuse to delay action. In the case of neonics, the weight of evidence clearly supports precautionary action to reduce — or even eliminate — them.

It’s no surprise that the pesticide industry and its associates oppose even this modest proposal and are running expensive PR campaigns to obscure the evidence of harm. The industry’s objection to restrictions on neonics is eerily similar to big-budget advertising campaigns to create a smokescreen thick enough to delay regulatory responses to the obvious harm caused by cigarettes.

Let’s hope today’s decision-makers have a better grasp of the precautionary principle and a stronger commitment to protecting the public good, because bees really do matter.