Back From the Brink: The Exmoor Pony 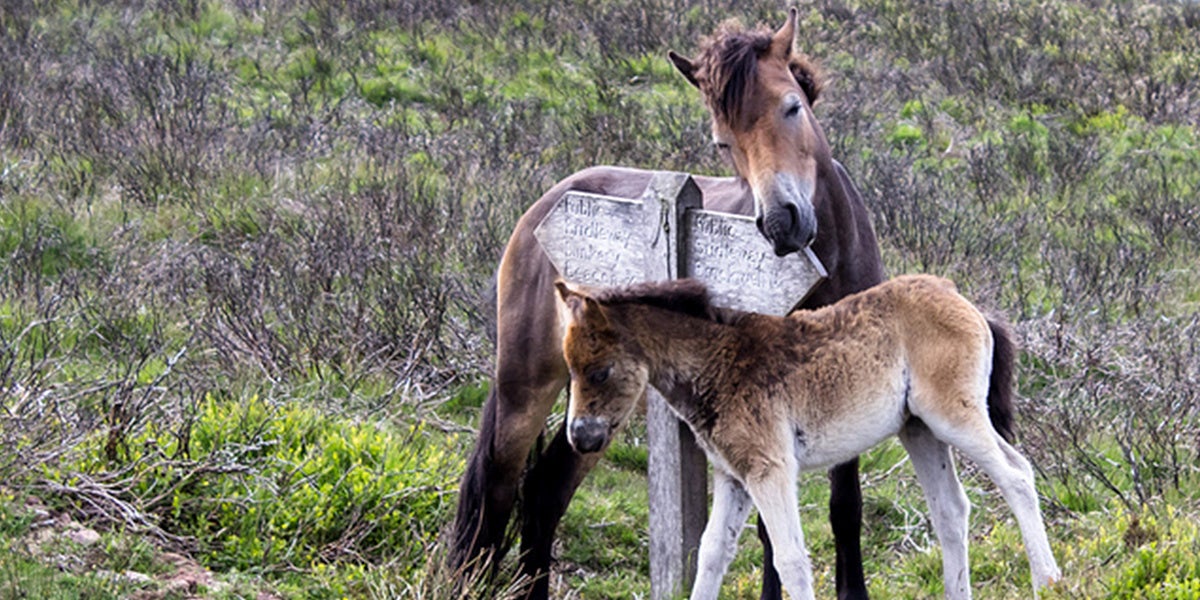 Bordered by Devon and Somerset counties and dropping away steeply to the Bristol Channel, the hilly, open moorland of Exmoor in southwest England is a place of freezing wet winters with driving winds. Vegetation here is tough and of little nutritional value. Only the hardiest of creatures endure in this harsh environment. The Exmoor pony is one of them, though it’s currently listed as “endangered” by the Rare Breeds Survival Trust.

Unique among the mountain and moorland breeds, Exmoor ponies are distinctly recognizable by their uniform bay, brown or dun color and lighter, oatmeal-colored markings around their nose and eyes. The hair on their coats is set in such a way that water simply runs off their backs, away from their eyes and other vulnerable body parts. Their coats in winter are composed of two different layers—fine, springy hairs grow against the skin providing an insulation layer, while the top layer is coarse, greasy and water-repellant. Snow falling on their bodies simply sits until it is shaken off, rather than melt and cause precious body heat to be lost. 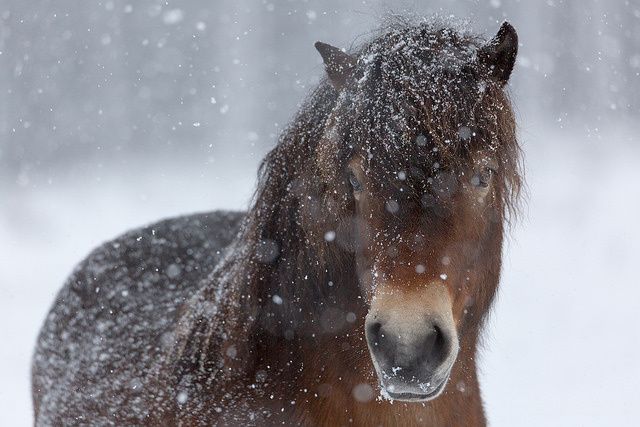 During winter, the Exmoor pony’s winter coat is composed of two different layers, which allows it to retain body heat during the English moor’s freezing wet winters.Thomas Haeusler

It is believed that these ponies derive from the original prehistoric horse that made the trek from Alaska to Britain some 130,000 years ago. There is mention of the ponies of Exmoor as early on as in the Domesday Book—a manuscript record of the “Great Survey” of much of England and parts of Wales completed in AD 1086. Along with the Przewalski’s horse of Mongolia, these primitive ponies provide an insight into what the original horses must have looked like many thousands of years ago.

“Their characteristics all represent adaptations to surviving harsh elements, living on poor food supply and avoiding predators; none even hint at people selectively breeding them for an unnatural purpose,” said Sue Baker, author of Exmoor Ponies: Survival of the Fittest.

“Their history suggests that they are minimally altered from the indigenous British wild pony and were the raw material for the development of many, if not all, the other British native pony breeds. Their genes are therefore the reservoir of all that is required for a free-living pony. Not only has the primitive appearance survived in the Exmoor but also natural behaviors in terms of herd life, food selection and survival instincts. Given enough of the right habitat, they have no need of us.”

These tough little animals were initially known as “horsebeasts” due to their robustness and strength. Initially, they roamed free in Exmoor, which for many centuries was a designated royal hunting forest where the king or queen of England and their cohort could hunt red deer. The isolation of the moor helped maintain the breed’s genetic integrity. The number of ponies on the moor varied over the years, rising to about 1,000 at times according to records, and they were managed by a warden, along with the cattle and sheep that were grazed on the moor. After Exmoor was sold to private owners in 1818, many of these ponies were sold to individuals and were used on farms for ploughing, pulling carts and for transportation. Some of these ponies also became the foundations for new breeding programs. However, the majority of the herds still roamed free on the moor in designated areas.

The Exmoor Pony Society was established in 1921 to watch over the preservation of the breed and ensure that they remained an important part of their natural habitat. Popularity of the Exmoor as children’s ponies peaked in the 1930’s, largely due to the success of the books written by Golden Gorse and the future of the breed appeared to be quite solid.

Before the World War II began in 1939, the wild ponies on the moor numbered around 500. But the War brought tragedy for the breed. While some ponies served their country in mounted home guard units, many more became casualties of war. Gates to the moors and private paddocks were left open, ponies were used as target practice and stolen by hungry nearby city-dwellers. By the time the War ended in 1945 there were just 50 Exmoor ponies left on the moor. The breed was at great risk of extinction and if it were not for the dedication and work of a number of conservation groups and individuals it may not have recovered.

It was a joint effort bringing the breed back from the brink. With so few ponies left, it was imperative that genetic diversity was maintained as much as possible and that the resilience of the breed was kept intact.

Mary Etherington from the Royal Dick Veterinary College was a keen supporter of the breed and helped raise national awareness of the importance of the preservation of the breed, including getting London Zoo to exhibit two ponies in 1948 to help bring attention to the dire situation these animals were in. The Exmoor Pony Society put in place strict quality control and inspection protocols to preserve the integrity of the breed while bringing the numbers back up.

Today, about 150 Exmoor ponies roam free on the moor and many more are being reared on farms in other parts of the United Kingdom. There are around 500 breeding mares and 100 licensed stallions throughout England, and about 3,000 Exmoor ponies worldwide. But though their numbers are on the rise they are still recognized as a rare breed by the Rare Breeds Survival Trust and the Farm Animal Genetic Resource Committee.

They are regularly rounded up for health checkups, which include procedures such as worming and hoof trimming. Young ponies are often captured and sold at auctions to private owners or stud farms. Recently the ponies have been doing well at the prestigious Horse of the Year Show in Britain.

In recent years, there has been a growing understanding of the ponies’ conservation value as well. The characteristics that make them so well adapted to the harsh conditions of the moor has proven to be instrumental in maintaining the integrity of that landscape. Their strong jaws, for instance, enable them to survive on poor quality vegetation such as gorse, shrubs and coarse grasses, while leaving the more delicate flora alone.

“For conservation purposes they have a number of things in their favor,” said Susanna Baker who works with the Yorkshire Exmoor Pony Trust, a charity that grazes these ponies in various locations around Yorkshire. “They are independent, self-sufficient and adapted to British conditions.” Baker has a working knowledge of these ponies and sees them as a valuable asset to environmental conservation.

“They thrive on poor forage and do a sterling job eating vigorous vegetation that out-competes more fragile plants,” she said. Baker also explains that while other mountain and moorland breeds may be suitable depending on the local conditions, the Exmoor have not been bred to suit a human purpose or human perception of beauty and are closer to a wild pony than other breeds.

Today, wild Exmoor pony herds are managed throughout Britain. A herd was even exported to the Czech Republic in 2014 in an effort to re-introduce wild ponies over there. That program was such a success that in 2015 a second consignment of ponies was sent there. The aim of this particular project is to revitalize land in the Czech Republic that has been over-farmed and restore it to its former beauty and productiveness.

In most parts of the world true wild-type horses and ponies are non-existent, being either wiped out through hunting or their native characteristics bred out via human selection. The ponies are not only a benefit to the environment but their presence attracts visitors and creates awareness around environmental conservation. When asked about the future of the breed, Sue responds: “Exmoors inspire great devotion and so the breed will probably be secure in terms of overall numbers.”

The grazing Exmoor pony herds in other parts of the United Kingdom give the breed extra insurance, for if a natural disaster or disease were to wipe out the main populations on Exmoor, the breed’s genetics would not be lost. These tough little ponies, though still classed as rare and endangered, are definitely on the way up and will hopefully be around for many years to come.