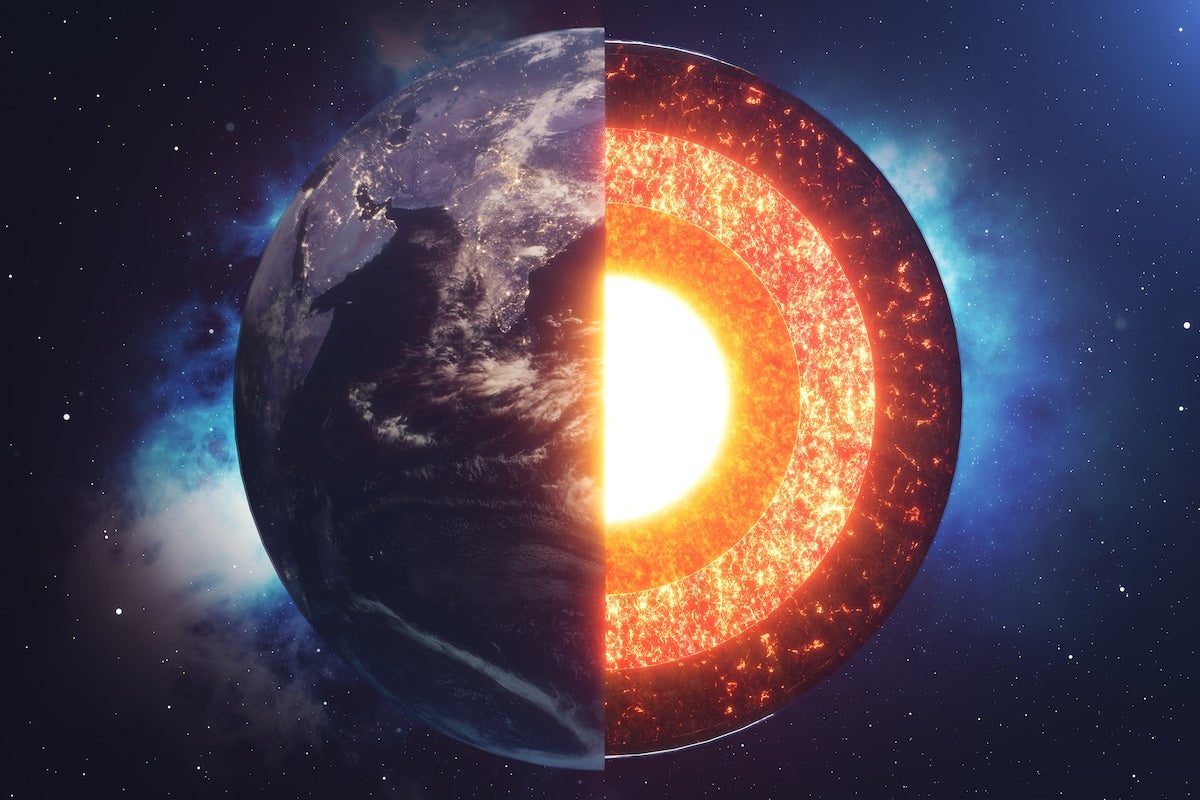 The structure of Earth's crust seen in a 3D rendering with elements furnished by NASA. Photo credit: Rost-9D / iStock / Getty Images Plus

The Earth of 4.5 billion years ago was covered in hot magma that had to gradually cool for the planet to become habitable. This happened over millions of years, as the surface formed the hard rocks of the crust that is our home. The interior of our planet still emanates geothermal energy that causes plate tectonics to move, resulting in earthquakes and volcanoes. But how fast did Earth cool and how long will it continue to cool before the effects of its hot interior stop?

Professor Motohiko Murakami of ETH Zürich and colleagues from the Carnegie Institution of Science have developed a system to measure how well a mineral — bridgmanite — conducts heat. Bridgmanite makes up the boundary layer between the iron-nickel core of Earth and its mantle layer, and its thermal conductivity influences how fast heat flows through the core into the mantle.

From their experiments, Murakami and the other scientists suspect that Earth may be cooling faster than previously thought. Their study, “Radiative thermal conductivity of single-crystal bridgmanite at the core-mantle boundary with implications for thermal evolution of the Earth,” was recently published in the journal Earth and Planetary Science Letters.

“This measurement system let us show that the thermal conductivity of bridgmanite is about 1.5 times higher than assumed,” Murakami said, as ETH Zürich reported. This finding suggests that core to mantle heat is also higher than was once believed, which accelerates the cooling of Earth.

Earth’s interior will eventually cool and solidify, and its plate tectonics will cease as well, possibly turning Earth into a sterile rock similar to Mercury or Mars, ScienceAlert reported.

Another factor in the rate at which Earth loses its heat is that when bridgmanite cools down it transforms into post-perovskite, a mineral that is more efficient at conducting heat and therefore increases the rate of heat loss from Earth’s core to its mantle.

“Our results could give us a new perspective on the evolution of Earth’s dynamics,” Murakami said, as reported by ScienceAlert. “They suggest that Earth, like the other rocky planets Mercury and Mars, is cooling and becoming inactive much faster than expected.”

Additional research is needed to determine how long it will be before the convection currents in Earth’s mantle stop, Earth.com reported. “We still don’t know enough about these kinds of events to pin down their timing,” Murakami said.