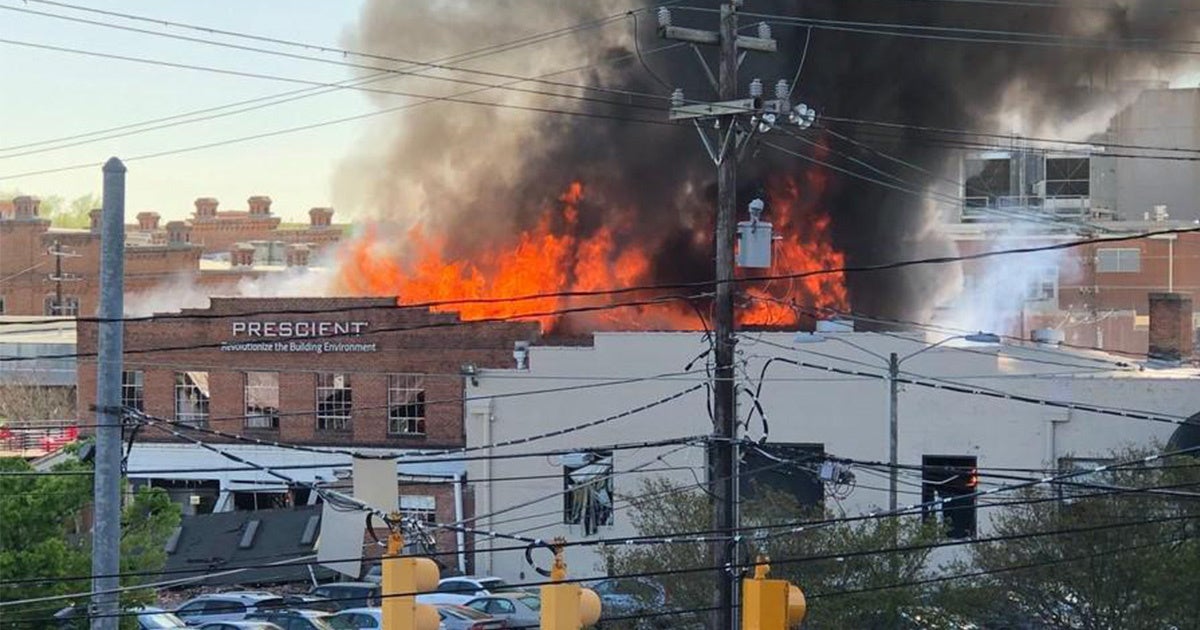 One person was killed and 17 were injured after a natural gas explosion in Durham, North Carolina Wednesday morning.

The explosion occurred at 10:07 a.m., about 30 minutes after firefighters responded to a 911 call reporting the smell of gas in the 100 block of North Duke Street, Fire Chief Robert J. Zoldos II told The Durham Herald-Sun. The firefighters had begun evacuating nearby buildings when the blast destroyed one building and damaged four others, sending up a plume of dark smoke.

“It looks like the front of the Pentagon on 9/11 — but on a very, very small scale,” Zoldos, who was a first responder during the attacks, told CBS.

I really hope everybody’s okay… happened right outside of the office #DurhamExplosion pic.twitter.com/bQKkuVxLuz

Witness Jim Rogalski, who was working in a nearby office, described the scene to CNN in a text message.

“Half the block is destroyed,” Rogalski wrote. “Lots of injuries. Our office across the street was blown out. It was terrifying. Glass and debris everywhere. No one killed in our office but several injuries — deep cuts, head lacerations.”

Zoldos told the Durham Herald-Sun that he contacted Dominion Energy, the company that supplies gas to Durham, after receiving the 911 call. Dominion tweeted that its subsidiary PSNC Energy “responded to a call about third-party damage to a natural gas line and the explosion occurred shortly thereafter.” Additional PSNC crews shut off gas to the area following the blast.

“Our thoughts & prayers are with those impacted by this tragic event as well as their families,” Dominion said.

Add'l @psncenergy crews arrived around 10:26am & shut off the flow of gas to the area. We're working closely with local emergency response & county officials. Our thoughts & prayers are with those impacted by this tragic event as well as their families. (2/3)

Dominion has been the driving force behind the controversial Atlantic Coast Pipeline, which would bring fracked natural gas through West Virginia, Virginia and North Carolina. Dominion has said it will appeal to the Supreme Court after an appeals court tossed key permits for the project over environmental concerns.

For anti-pipeline group No ACP!, the explosion underscored the dangers of using gas as an energy source.

“They tell us gas is safe but it’s clearly not,” the group tweeted.

The cause of Wednesday’s explosion is currently under investigation, the Durham Herald-Sun reported. Officials initially said it was caused when a contractor hit a two-inch pipe beneath the sidewalk, but later said they were still working to discover the cause.

“Until the investigation is complete, we don’t know that’s the source of the gas leak,” Deputy City Manager Bo Ferguson told the Durham Herald-Sun.

The building most damaged by the explosion was a former Studebaker dealership now home to several businesses including Kaffeinate coffee shop. It was the owner of that shop, 61-year-old Kong Lee, who perished in the blast, CNN reported.

Here’s the latest update from @DurhamPoliceNC on today’s #DurhamExplosion. Our thoughts are with the Lee Family during this difficult time. pic.twitter.com/qLuDYyjGue

Of those injured, one was a firefighter, one was an employee of Dominion who had responded to the initial leak report and eight were employees of Duke University, CNN reported. The firefighter was seriously hurt, but their life was not in danger, Zoldos said. Six of those injured were critically wounded.

The blast came as the city of Durham celebrated its 150th birthday.

“It’s an irony, I know,” Mayor Steve Schewel said as he praised emergency crews for their response, as CBS reported. “But what I will say about that is that what we hoped would be a very happy day it’s not a happy day, but, again, it’s a day when I am so proud of how our local government functions.”