Dead Baby Turtle Found With 104 Pieces of Plastic in Stomach 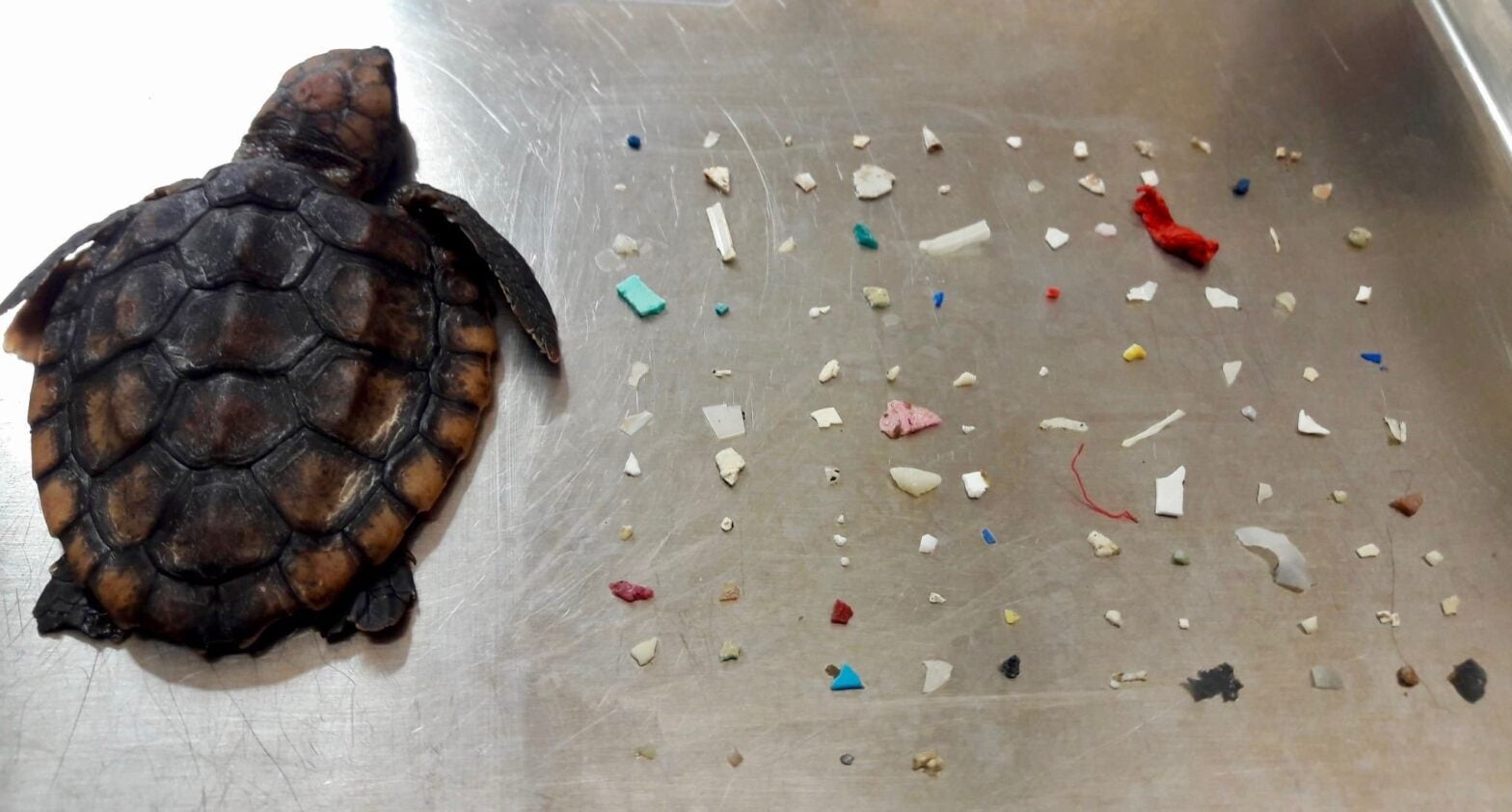 "This is a sad reminder that we all need to do our part to keep our oceans plastic free." City of Boca Raton / Gumbo Limbo Nature Center

A baby sea turtle that washed ashore in Boca Raton, Florida last week had 104 pieces of plastic in it stomach. The plastic products ranged from wrappers to balloons to bottle labels to twist ties used to cinch trash bags, as the South Florida Sun-Sentinel reported.

The Gumbo Limbo Nature Center in Boca Raton shared a photograph on Facebook of the turtle next to all the pieces of plastic that it had ingested.

“It was weak and emaciated. I could just tell it wasn’t doing well,” said Emily Mirowski, a sea turtle rehabilitation assistant at the center, who examined the turtle before it died, as CNN reported.

“As she cut into it, it was just like, whoa. Every time she cut through there was more plastic coming out of its stomach,” said Whitney Crowder, the Nature Center’s sea turtle rehabilitation coordinator, as the Guardian reported.

While the image of the turtle next to its plastic is troubling and surprising to the many thousands of people who have shared the photograph on Facebook, it is anything but surprising to Crowder and her colleagues.

“It’s washback season at Gumbo Limbo and weak, tiny turtles are washing up along the coastline needing our help,” the Facebook post reads. “Unfortunately, not every washback survives. 100% of our washbacks that didn’t make it had plastic in their intestinal tracts. This turtle, which would fit in the palm of your hand, had eaten 104 pieces of plastic. This is a sad reminder that we all need to do our part to keep our oceans plastic free.”

In one comment, the Nature Center had to respond to incredulity that so much plastic could be in one baby turtle.

“Yes, all of this plastic came from one tiny turtle,” the center responded to one posted comment, as the Sun-Sentinel reported. “The plastic plugs them up and causes them to go into septic shock. We perform necropsies on all turtles that die in our care which is how we determine cause of death. Plastic pollution is the sad world we live in now. We must do better.”

Turtles washing up and suffering malnutrition from plastic consumption are so common that Gumbo Limbo Nature Center put a cooler in front of its building for residents to safely drop them off for rehabilitation. That’s how the loggerhead came to the center’s attention, according to CNN.

“Just this morning, we have 60 washback turtles sitting in our hatchling tank. Six have died already,” said Crowder to the Guardian last week.

Washbacks are young turtles that have swum out into the ocean and made it to mats of floating seaweed called sargassum, where they live for their first few years.. Trash accumulates on the seaweed-line and is easily mistaken for sea-grass, so the baby turtles inevitably end up consuming it, according to the Guardian.

“The issue is that with all the plastic in the oceans, that’s where the plastic sticks,” said Mirowski to CNN. ” All the microplastics stick to the seaweed, and it looks like food to the baby turtles.”

She added that the plastic gives the turtles a false feeling of being full. As a result, they do not eat or receive the nutrition they need to survive.

At the center, the rehabilitation staff gives the turtles a diuretic in an attempt to flush the plastic out of their system, according to the Guardian.

“We give them a small amount of fluids everyday to get them hydrated,” said Mirowski to CNN. “Then we hope they’ll pass the plastic naturally. The important thing is getting them hydrated to get their appetite back.”

If they are nursed back to health, they are brought back out to sea where they run the risk of eating plastic again.

“It’s extremely depressing. You definitely have to put your blinders on just to push through the day, but I try to stay positive,” said Crowder to the Guardian.