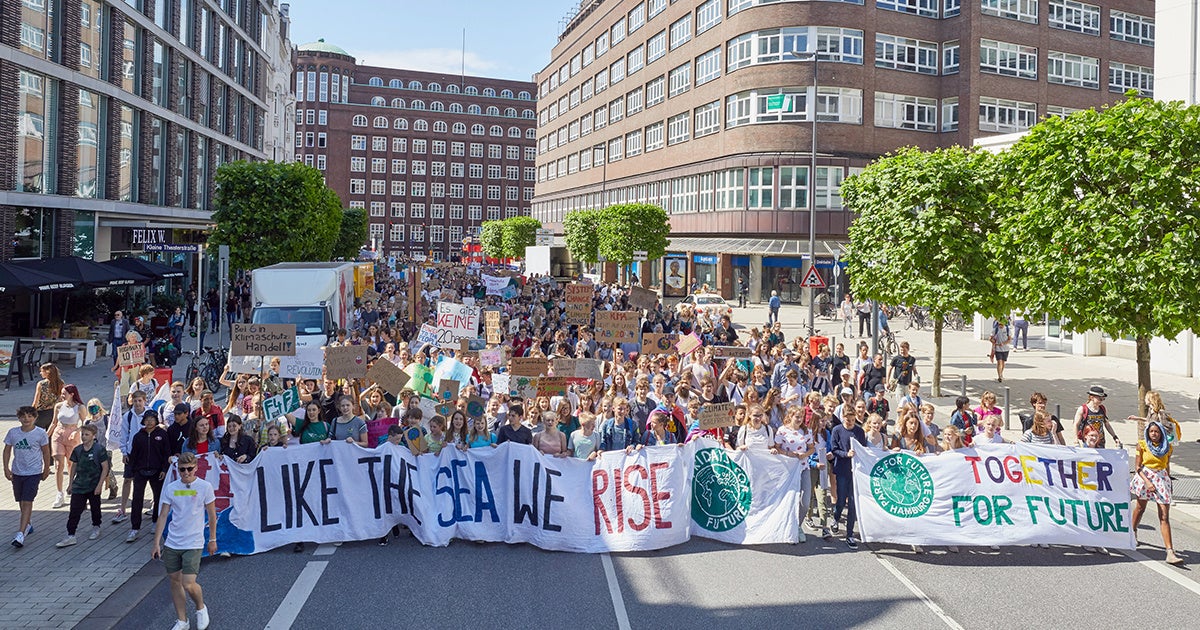 Participants of the climate demonstration Fridays for Future in Hamburg, Germany on June 14. Georg Wendt / picture alliance via Getty Images

Organizers of upcoming global climate strikes hope their demands for a rapid end to business as usual and a swift start to climate justice will be too loud to ignore.

The strikes, which are set for Sept. 20 and 27 — with additional actions slated for the days in between — are planned in over 150 countries thus far, and over 6,000 people have already pledged to take part.

It has the potential to be the biggest climate mobilization yet, said organizers.

“Our house is on fire — let’s act like it,” says the strikes’ call-to-action, referencing the words of Swedish activist Greta Thunberg. “We demand climate justice for everyone.”

Thunberg echoed that call in a just-released video promoting the upcoming actions.

“Everyone should mobilize for the 20th and 27th of September,” said Thunberg, “because this is a global issue which actually affects everyone.”

It’s been the world’s youth, though, that have played a driving force in recently calling attention to the climate crisis with protests and school strikes.

“Young people have been leading here,” 350.org co-founder Bill McKibben said in the Thunberg video, “but now it’s the job of the rest of us to back them up.”

The two Fridays of action, according to organizers, will bookend a “Week for Future” to sustain the climate call. Nestled between is the United Nations Summit on Climate Change on Sept. 23 in New York.

“Because we don’t have a single year to lose,” said Luisa Neubauer of Fridays for Future Germany in a press statement Wednesday, “we’re going to make this week a turning point in history.”

The upcoming protests reflect a call form a diverse group of global organizations, including Amnesty International, Oxfam, La Via Campesina, Fridays for Future and Extinction Rebellion.

“The youth uprising,” said 350.org North America director Tamara Toles O’Laughlin, “is backed by millions who refuse to sit by while the Trump administration, hand-in-hand with fossil fuel executives, continues their campaign of climate denial and policy rollbacks, all while we face extreme heat waves, hurricanes, floods, and wildfires.”

“We stand with communities demanding economic transformation that works for our collective right to a sustainable, healthy, and livable future,” she continued.

Backing up the need for the mobilization is ample evidence of the climate crisis. As the Global Climate Strike website sums up:

The inter-generational and global actions, according to the global organizers, can serve to show the size of the chorus of those demanding an end to the fossil fuel economy, bring out those previous on the sidelines of the climate justice fight, and “kickstart a huge wave of action and renewed ambition all over the world.”

“Multinational corporations aren’t going to give up anything unless we fight,” he said.

“This is a fight for ourselves, for our future, and for future generations,” continued Cholerton. “This is a fight for justice for all: workers, students, parents, teachers, conservatives, liberals, socialists, and everyone else. We can fight against climate breakdown, and we can fight against environmental destruction. We need to all be part of this, or else the establishment won’t budge.”