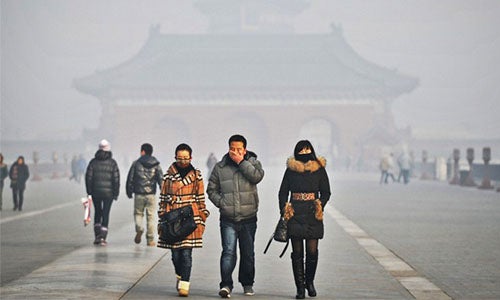 China accounts for a tenth of all the greenhouse gases and aerosols that have collected in the atmosphere over the industrial era, according to new research. 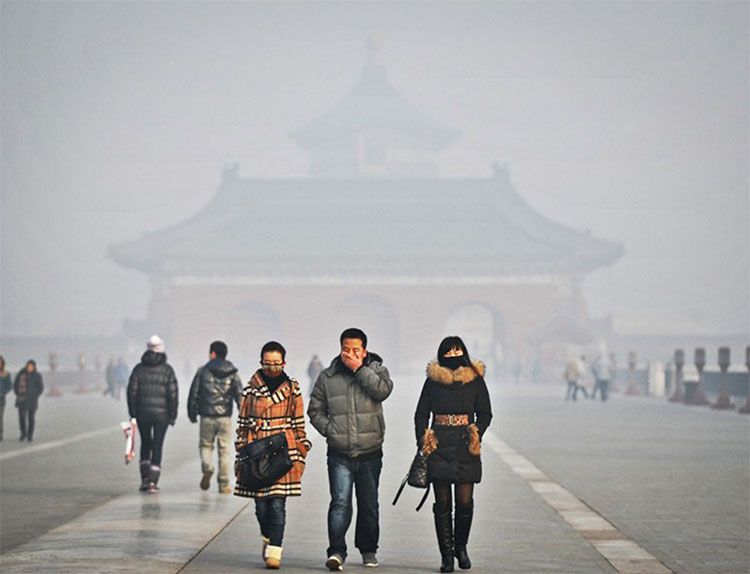 It’s a pretty complicated picture. But in recent times, this is because cooling from aerosols has been masking part of the warming signal. The upshot of this is that cutting some types of aerosol in a much-needed bid to improve air quality could drive faster warming in the coming decades, say the authors.

The new study quantifies all the gases and particles currently in the atmosphere that are having an effect on global temperature and which can be traced back to human activity.

This includes factors that have a warming influence—such as greenhouse gases and black carbon—and those that induce cooling, such as sulphate and nitrate aerosols.

The authors combined this with China’s past and present emissions to estimate, for the first time, the size of the country’s total contribution to human-caused climate change.

Unlike aerosols, greenhouse gases stay in the atmosphere for a very long time. Carbon dioxide emitted at the start of the industrial revolution is still warming the atmosphere today, which is why scientists take into account historical emissions as well as present day ones to work out a country’s contribution to climate change.

The graph below (main, not inset) shows the impact on global temperature—known as the radiative forcing—from different anthropogenic sources of greenhouse gases in China extending back to 1850. 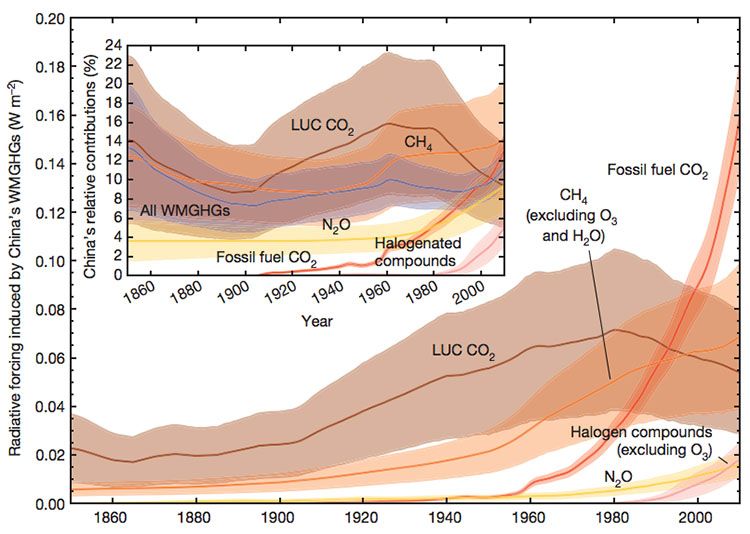 Warming as a result of changing land use rose throughout the 20th century, before declining in the 1980s as reforestation programs turned the land from a net emitter to a net absorber.

In a News and Views article that accompanies the study, Prof. Dominick Spracklen, associate professor of aerosols and climate at the University of Leeds, said:

“China is now planting forests on a larger scale than anywhere else on the planet. These plantations sequester CO2 from the atmosphere, so that Chinese forests are now a net sink of this gas.”

Despite this, past emissions from land-use change still account for a third of atmospheric CO2 attributable to China, with fossil-fuel burning making up the other two thirds, the paper notes.

The warming caused by emissions of nitrous oxide (yellow) and halogen compounds (pink) increased over the past two or three decades—to a far lesser extent than fossil fuel CO2, while methane-induced warming increased three-fold between 1950-2010 (orange line).