Canadian Tycoon Clashes With Environmentalists in the Bahamas 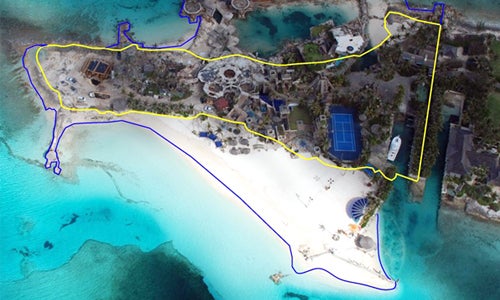 Canadian womenswear mogul Peter Nygård never seems to be more than an arm’s length away from controversy.

According to a 2010 Forbes article, Nygård has been accused of abusive labor practices, tax evasion, sexual harassment and rape. (He has also been called the Hugh Hefner of Canada). Punching back hard, he has sued his accusers and intimidated his critics with a small army of lawyers. “No one has ever disobeyed my orders and gotten away with it!” he once raged, according to the testimony of a former business partner. 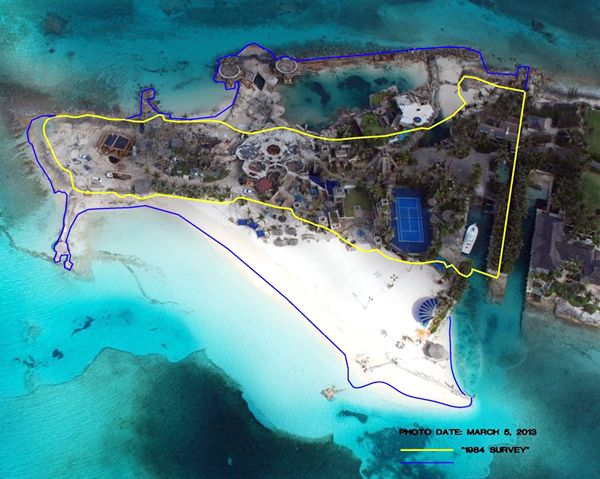 The unpermitted growth of Nygard’s property over the years. Photo credit: Save The Bays

Environmentalists say those who obey his orders include government officials in the Bahamas, where Nygård has been building a massive estate since the mid ’80s. Forbes described his resort as “a 150,000-square-foot Mayan-style resort featuring 12 themed cabanas, volcanic smoking temples, a helipad, disco, casino and a human aquarium (with sharks on one side of the glass)” where he “has hosted the likes of Robert De Niro, Oprah, Michael Jackson, Prince Andrew and George H.W. Bush,” as well as his one-time girlfriend Anna Nicole Smith.

Environmentalists, unimpressed by the fact that it’s been featured on Lifestyles of the Rich and Famous, describe it as a threat to the delicate and world-renowned ecology of the islands as well as to the public’s ability to enjoy the beaches that attract visitors.

Nygård’s appropriation of oceanfront to expand his resort and his disregard of legal process and environmental protections to do so has been challenged by the rapidly growing Bahamas-based grassroots environmental group, Save The Bays, founded last year. That group has been embroiled in a series of legal measures to prevent the uncontrolled expansion on the peninsula he renamed Nygård Cay. That includes dredging and construction of artificial structures in the ocean—a threat to the marine habitat including delicate coral reef ecosystems.

“Over the last 20 years Peter Nygård has illegally expanded his property at Simms Point to nearly twice its original size,” charges Save the Bays. “Finally the government has required him to apply for permits for the work he’s done to claim $35 million worth of crown land, the same work that has already caused environmental destruction to Clifton Bay and Jaws Beach. He’s also applied to keep going, expanding his land further into the seabed, which belongs to the Bahamian people.” 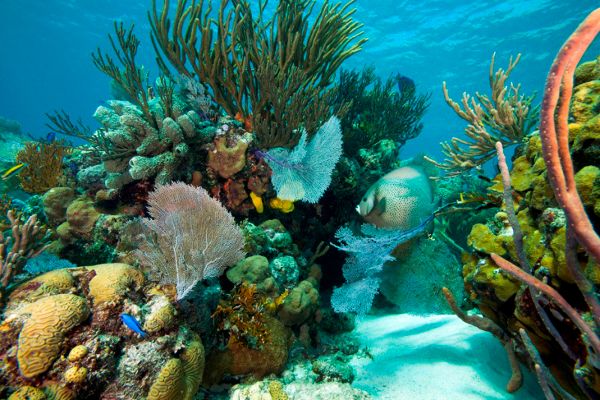 Following a recent visit by environmentalists to the island, Sharon Khan, international director of Waterkeeper Alliance, noted the impact the unauthorized work at Nygård Cay was having on a nearby beach.

“Jaws Beach is one of the last beaches that remains open to the public on this island and we remain concerned that poorly planned and unpermitted developments are decreasing the ability of Bahamian people and their guests to enjoy this famous beach and its clear blue water,” she said.

The group was also granted judicial review of the government’s failure to develop a land use plan required by the country’s 2011 Planning and Subdivision Act.

It’s merely the latest skirmish in a long war, which also includes charges and countercharges between Nygård and his neighborhood, billionaire hedge fund manager conservationist Louis Bacon. Naturally, they’re suing each other.

Bacon, who supports the conservation efforts of Save The Bays and has won awards from groups like Riverkeeper, National Fish and Wildlife Foundation and National Audubon Society, is claiming in a New York court that Nygård has engaged in a smear campaign against him. The New York application relates to evidence from a whistle-blower which is said to support Bacon’s defamation suits and Save The Bays’ action against Nygård concerning environmental destruction.‎