Everyday Heroes and Thousands of Firefighters Step Up to SoCal Wildfires 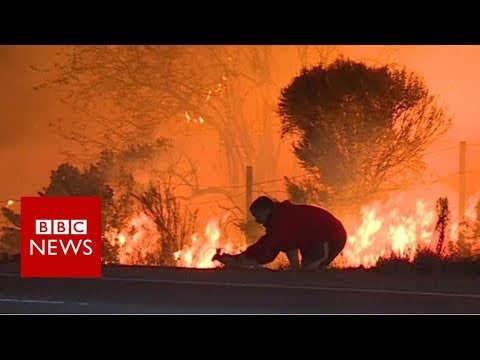 About 5,700 firefighters are battling the region’s brushfires around the clock in intense heat and grueling conditions.

Some come from nearby states, such as Genesee Dennis from the Seaside Fire Department in Oregon who is putting out the Creek Fire with colleagues.

“We just do it. And us going through a 24-hour shift is nothing compared to folks losing their homes,” Dennis told CBSLA.

Take a moment to give some thought and thanks to firefighters who are out there every day keeping people safe. Some are facing grueling conditions as they battle wildfires across California. This firefighter got overheated. THANK YOU FIREFIGHTERS! https://t.co/g74amdDapo pic.twitter.com/fUjO5EADxj

The Los Angeles Police Department touted that their motto “To Protect and Serve” applies in many ways. The department posted an image of an officer in a respirator carrying a cat as smoke billowed from behind.

“For some it might just be a cat,” the tweet said. “But to others it’s a friend, a loved one, a companion.”

For some it might just be a cat. But to others it’s a friend, a loved one, a companion. The #LAPD has a motto, “To Protect and to Serve”, and our officers have been displaying that in many ways during the #CreekFire & #SkirballFire pic.twitter.com/kmyHhvy9Fe

Other Californians have braved harrowing conditions to save animals. In the video seen above, a man steps into the scorching Ventura County highway to rescue a wild rabbit.

The clip has since gone viral with many on social media calling the man a hero.

“If you need your faith in humanity restored just watch this video of a man saving a wild bunny from the #LAFires,” one person
tweeted.

Several locals also banded together to save a horse trapped in a ditch as fires raged in Sylmar, California.

“A veterinarian tranquilized the horse, others began moving furniture out of a garage and LA County fire freed up a small crew to help with the rescue,” Gina Silva, a reporter with Fox 11, wrote on
Instagram.

“They all tore down the wall to free the animal. The horse was then immediately transported to a nearby animal hospital.”

In Ventura County, a group of five friends used garden hoses to beat back flames at homes owned by people they’ve never met.

“For us, this is our community,” John Bain, one of the group members, told the
Los Angeles Times. “I consider this our home. When something like this happens … you can sit around for things to get better or you can try to go out there and do something.”

Evacuation centers and animal shelters are housing people and pets displaced by the fires. The Times reported that Los Angeles Unified school officials have opened centers where students affected by wildfires can pick up free meals.

It’s clear that in times like these, when Mother Nature is at her worst, humanity can be at its best.

5 friends from Camarillo banded together and went to Ventura to do what they can: help try stop homes from catching on fire with garden hoses with other strangers. pic.twitter.com/41AvBl3CvI