Extreme Weather Has Killed 150 in Brazil This Year. The Climate Crisis Is to Blame 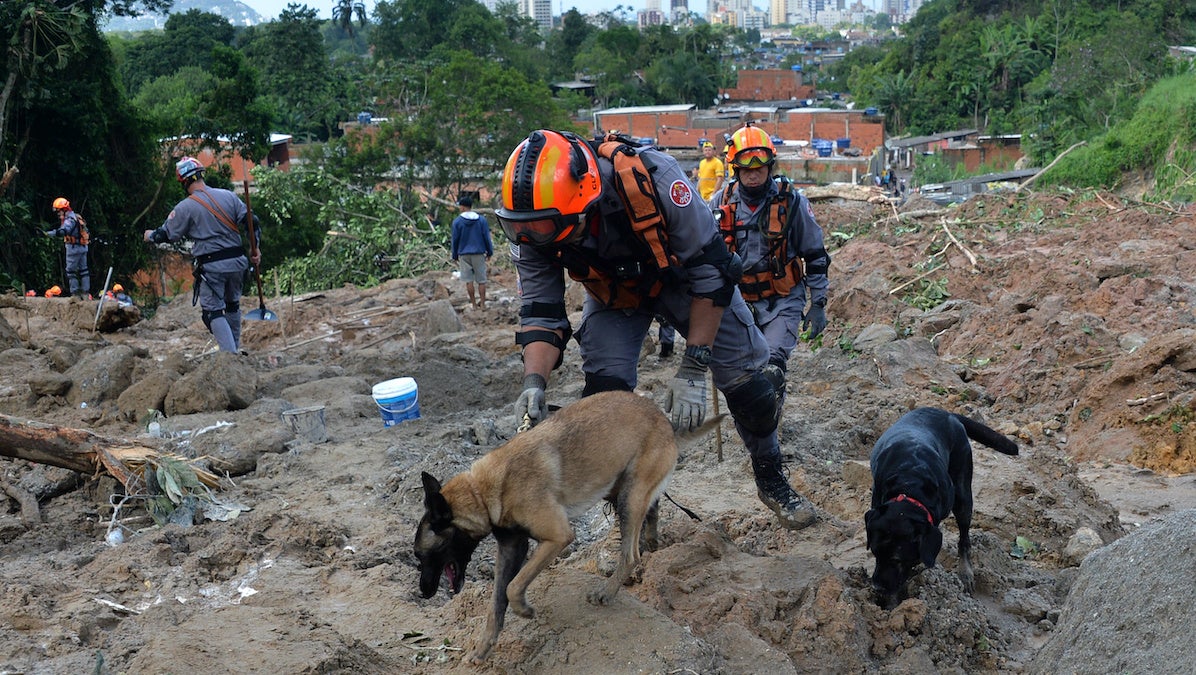 Firefighters and search dogs look for victims of a landslide triggered by torrential rains in Barreira do Joao Guarda, a favela in Guaruja outside of Sao Paulo, Brazil, on March 4, 2020. NELSON ALMEIDA / AFP via Getty Images

Brazil has faced a series of extreme weather events since the calendar flipped to 2020, with different states inundated with floods, torrential downpours, and mudslides that have killed 150 people in just a few months. Scientists say that the climate crisis is responsible, according to The Guardian.

Data sent to The Guardian showed an increase in extreme rainfall as the earth continues to heat up. Extreme rainfall events are when more than 80mm (approximately 3.1 inches) falls within 24 hours. Those remarkable events have increased in frequency over the past 30 years in the capitals of the southeastern states of São Paulo, Rio de Janeiro and Belo Horizonte, where the deadly rains happened.

“When it is hotter, it rains more, and this gets worse if you have urban areas, areas of concrete and asphalt,” said José Marengo from Brazil’s National Center for Monitoring and Alerts of Natural Disasters, to The Guardian.

Marengo is one of the authors of a study published last month in Annals of the New York Academy of Sciences that noted an uptick in extreme weather in southeastern Brazil. The paper also found that the region’s dry season has extended from September into October, meaning the parched ground is more susceptible to flash flooding and mudslides.

“This, together with the inappropriate occupation of risky areas, such as slopes and banks of water-courses, leads to inundation, flooding and landslides,” the paper said, as The Guardian reported. “Changes in extremes can be partly due to natural climate variability but can also be related to global warming and/or urbanization.”

The Belo Horizonte region experienced the worst rainfall it has seen in 100 years earlier this year, killing at least 53 people and forcing more than 2,600 people from their homes, according to AccuWeather. In that storm, torrential rains pelted the region for 48 hours.

In those two days, more rain fell on the region than typically falls through the entire month of January, according to AccuWeather meteorologist Maura Kelly.

Last week, at least 29 people died and two-dozen were missing after torrential rains triggered flash floods and landslides in São Paulo and Rio de Janeiro, according to Space Daily. In that storm, 282 millimeters, or just over 11 inches of rain, fell in just 12 hours in Guarujá, a coastal town just 25 miles from São Paulo. The rain that fell in that half of a day exceeded the average rainfall for the entire month of March.

The world’s warming temperatures are causing more evaporation, which leads to an increase in the amount of water held in clouds that falls as precipitation. “We are seeing more and more extreme events happening in big and important cities,” said Tercio Ambrizzi, a professor of climatology at the University of São Paulo, as The Guardian reported. “There is a relationship with the increase in average global temperatures.”

“There’s clearly been an increase of extreme events in the south-east of Brazil,” Ambrizzi said, as The Guardian reported. Ambrizzi was also an author on the paper mentioned earlier.