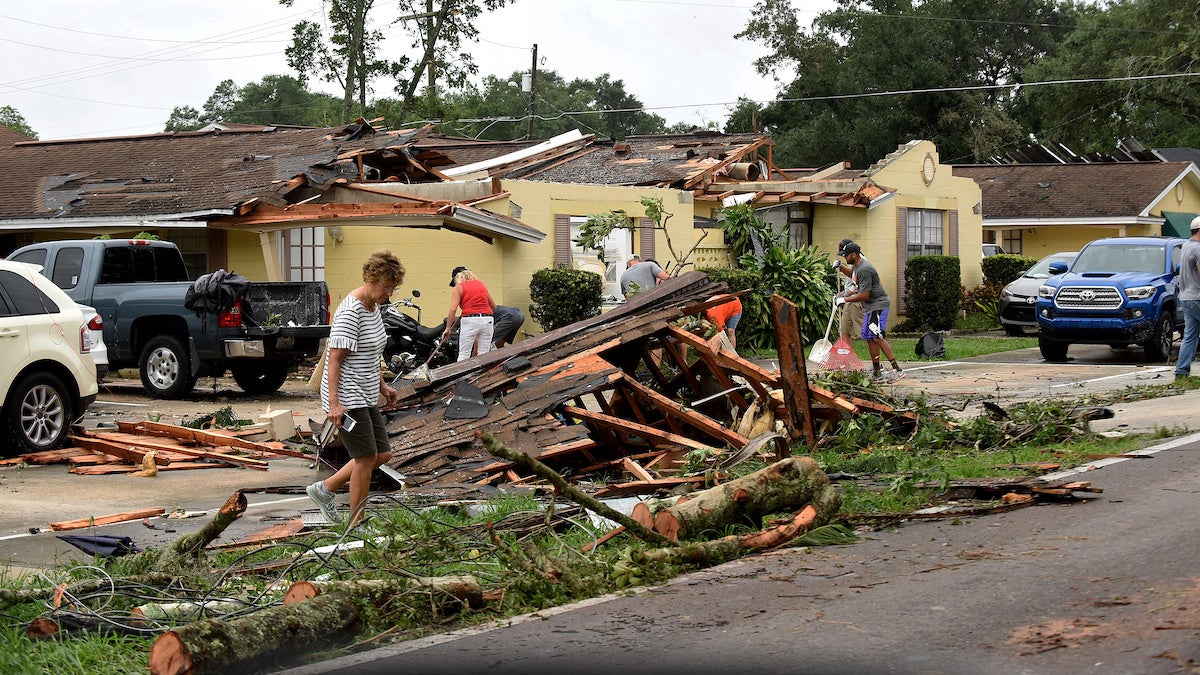 People clean up debris from their damaged apartments during the aftermath of Tropical Storm Cristobal in Orlando, Florida on June 7, 2020. Paul Hennessy / SOPA Images / LightRocket via Getty Images

Tropical Storm Cristobal made landfall in Louisiana Sunday as the earliest third named storm on record in the Atlantic Basin.

The storm brought flooding to parts of Louisiana, Mississippi, Alabama and Florida and caused tornadoes in the Sunshine State, The Associated Press reported. While it made landfall well below hurricane strength with winds of 50 miles per hour, it was predicted to pour as many as 12 inches of rain in some areas and generate storm surges of up to five feet.

“The flash flooding mixed with the storm surge could be a disaster in some areas,” National Weather Service Baton Rouge meteorologist Danielle Manning told The New York Times. “Areas that can’t handle that amount of rainfall.”

One significant hazard with #Cristobal is flash flooding. The @NWSWPC is highlighting a large area of concern from SE Louisiana/S Mississippi northward through Arkansas and beyond. Follow local products at https://t.co/SiZo8ohZMN for more on this flooding rainfall potential. pic.twitter.com/JBGmKOADdU

Louisiana Gov. John Bel Edwards declared an emergency ahead of the storm Thursday and on Friday asked President Donald Trump to do so as well. Trump said he would declare an emergency on Twitter Sunday.

The storm brought three to five feet of flooding along the Louisiana coast and into Mississippi, Manning said.

New Orleans suburb Jefferson Parish called for voluntary evacuations of low-lying areas, according to The Associated Press. It was unclear how much New Orleans would be impacted as it depended on whether the city’s aging drainage system would keep streets dry.

City resident Daniel Priestman told The Associated Press that he did not observe people rushing to buy supplies. Instead, he said they were “overwhelmed” by the coronavirus pandemic and recent high-profile police murders of African Americans that led to nationwide protests. They were “resigned to whatever happens — happens,” he said.

The storm made landfall between the mouth of the Mississippi River and the barrier island of Grand Isle, which was evacuated. Flood waters washed over the only road to the island.

Looks like the Biloxi Lighthouse Pier did not make it. 🙁 Video sent in to the @WLOX Weather App by Jeff Howard #mswx @NWSNewOrleans @spann pic.twitter.com/PnIGn4LaNZ

In Hancock County, Mississippi, 100 employees of the Silver Slipper Casino had to be rescued Sunday afternoon when five-foot flood waters trapped them in the building, AccuWeather reported. A family also had to be rescued from the casino hotel Sunday night.

In Florida, the outerbands of the storm spawned several tornados, one of which came close to downtown Orlando Saturday. Another twister uprooted trees and downed power lines near Lake City, Florida Sunday, The Associated Press reported. The wind storm did not injure anyone, but Cristobal claimed two lives when two brothers, aged eight and ten, were carried away by a rip current when swimming at a Grand Isle beach Friday, according to AccuWeather.

The storm had weakened to a tropical depression by early Monday morning, but the risk of flooding, tornados and strong wind continued for the lower Mississippi Valley and Central Gulf Coast. It should reach Arkansas by Monday evening, according to the National Weather Service.

Recently downgraded Tropical Depression Cristobal will move steadily up the MS River Valley over the next few days. Conditions will slowly improve along the gulf coast through Tuesday. Meanwhile, a heavy rain flood threat is still a concern. #lawx #mswx pic.twitter.com/W7Wor3pyj7

In addition to its arrival early in hurricane season, Cristobal was also notable because it developed from the remnants of Tropical Storm Amanda, the first named storm of the Pacific hurricane season, which battered El Salvador, Guatemala and Honduras.

The remnants of the storm were pushed by wind circulation over the warm waters of the Bay of Campeche.

“It did not take time – given the 29- to 30-degree-Celsius [mid-80s F] water – to help create thunderstorms, lowering pressure and a coherent low-level circulation which has become Cristobal,” Kottlowski said.

The climate crisis is making tropical storms more intense, partly because warmer water provides more storm fuel. The waters of the Bay of Campeche were three to four degrees Fahrenheit above average for this time of year when the storm formed, CNN reported.