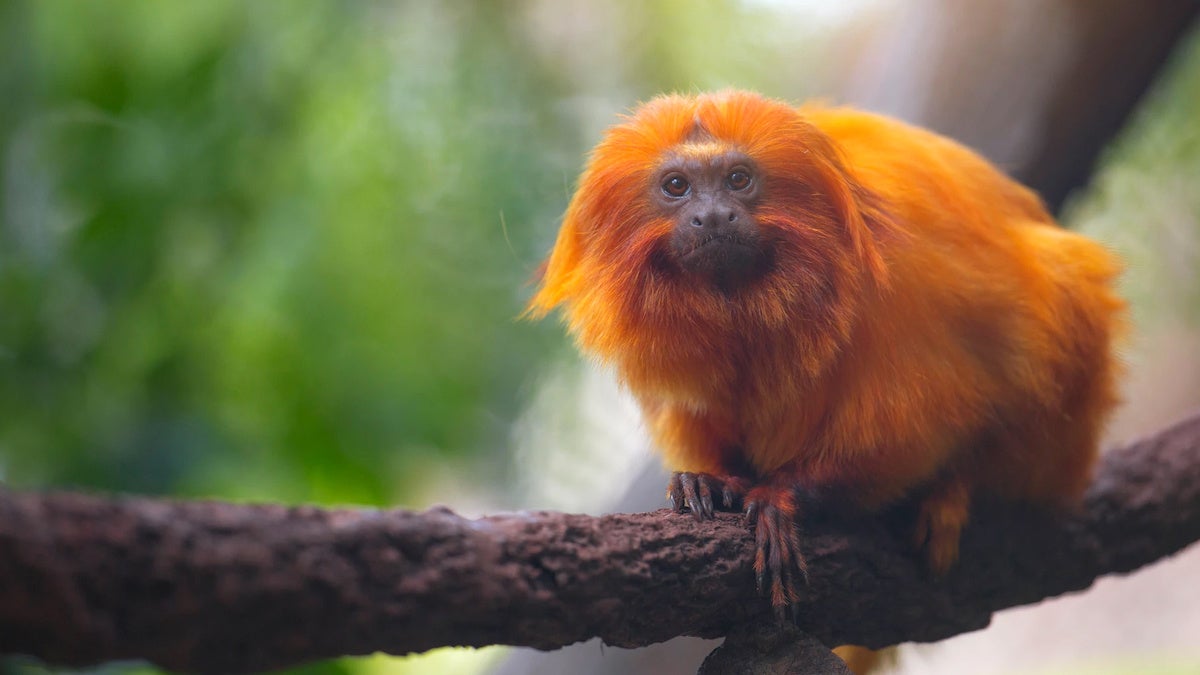 The Brazilian Amazon is hemorrhaging illegally traded wildlife according to a new report released Monday. Each year, thousands of silver-voiced saffron finches and other songbirds, along with rare macaws and parrots, are captured, trafficked and sold as pets. Some are auctioned as future contestants in songbird contests. Others are exported around the globe.

Fish bound for ornamental home aquariums also pour out of the Amazon, including the tiny, iridescent blue and red cardinal tetra. Arapaima fish — also known as pirarucù, one of the world’s largest freshwater fish — are caught illegally, “laundered” amidst captive-bred specimens and shipped to the U.S. in large numbers.

Other fish are headed for the dinner table, as are freshwater turtles and their eggs, while tapir, peccary and other mammals are sold in Brazil as bushmeat. Jaguar teeth, heads and skins are shipped to China.

Millions of animals are being illegally captured and traded live and in parts in a thriving Brazilian black market, according to the report, produced by TRAFFIC, a UK-based nonprofit that studies the trade. “The pervasive and uncontrolled capture of wild animals and plants for the illegal trade is having grave consequences for Brazilian biodiversity, the national economy, the rule of law and good governance,” it says.

Importantly, the researchers found that an ever-increasing segment of the illegal trade launders poached animals via a sprawling, legal captive breeding industry — a network that specializes in birds, which have a huge domestic market in Brazil.

The authors also discovered that few government agencies have kept records or reported solid data that quantify the true scope of the problem. In many cases, records did not even identify the species or number of animals seized by authorities, while data coming from the Amazon was “notoriously scarce.”

“Significant seizures are made on a daily basis by Amazon state law enforcement, and we did not have access to their data,” Ferreria said, adding, “from what we saw, [the illegal trade] is even bigger than we imagined.” 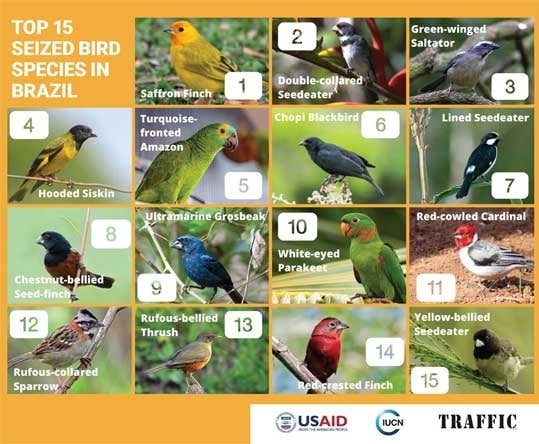 Trends remain difficult to track, however, since seizure data alone represents a mere fraction of animals illegally pulled from the wild. But it is clear from existing data that there is an uptick in smuggling of some species, including jaguars: seizures increased by 200% from 2012 to 2018.

The lack of comprehensive data, the report notes, tends to play down the importance, as well as concealing the severity, of Brazilian trafficking — undermining enforcement efforts, legal attention and the funding needed to fight it.

But the study warns that the illegal trade is having serious consequences not only for the animals seized, but for entire species, ecosystems and people, not just in the Amazon but around the globe. The current COVID-19 epidemic, for example, caused by a coronavirus that jumped from wildlife to humans, has reminded the world that trafficking in wild animals is not merely a conservation issue, says Ferreira. It’s both a public health issue and a biosafety issue.

An overarching national strategy is needed now to deal effectively with the problem, said the research team.

Impact on the Amazon

Today’s vigorous, deadly commerce has helped speed the demise of 1,173 species that are either facing extinction or have already vanished in Brazil. Often the largest, strongest, most beautiful animals are lost, impacting the entire population. For example, the trade targets male birds with their showy plumage, while the few survivors of a species remaining in the wild can become inbred, weakening the gene pool and genetic resilience.

The scope of the plunder has also sparked concern over broader, cascading ecosystem impacts, says Ferreira, who explained that regularly taking animals from wild populations creates a domino effect, dismantling the biological and physical systems that sustain all life on Earth.

For example, without birds that act as pollinators and seed-dispersers, trees and plants that many creatures rely on for food disappear. Tropical forests also act as huge carbon vaults, mitigating climate change and extreme weather; they offer buffers from flooding and provide drinking water for millions of people. Losing millions of animals every year to trafficking could lead not only to empty forests, but eventually cause whole ecosystems to crash. 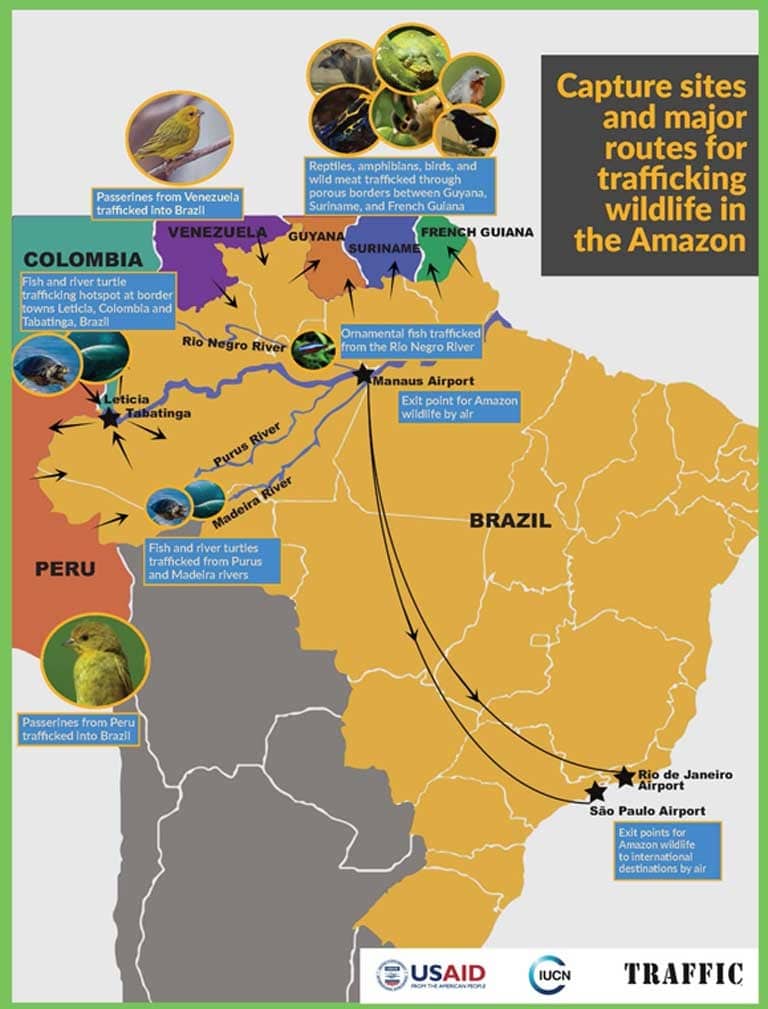 The wildlife trade is also gaining increasing attention because of its lawless perpetrators: transnational criminal trafficking networks span the globe, make huge profits and cultivating massive corruption. Their illicit supply chain extends from the Amazon to almost every continent.

The Global Environment Facility (GEF) describes the illegal wildlife trade as “one of the most lucrative illegal businesses in the world.” It’s ranked as the world’s fourth largest source of criminal earnings, generating up to U.S. billion annually. With so much money changing hands under the table, the trade has even become a global national security issue.

But even though environmental authorities may seize illegally traded animals and apprehend some smugglers, the study notes that law enforcement is not targeting the kingpins who mastermind the trade or its supply chains. As a result, this shadowy underworld industry thrives as it breeds widespread corruption, bribery, fraud, forgery, money laundering and smuggling.

Unfortunately, “Existing legislation does not consider wildlife trafficking a ‘serious crime,'” and there are numerous loopholes and inconsistencies in laws, the report says. Since the illicit trade is such a lucrative business, mild penalties offer little deterrent. A six- to 12-month “detention” is common, which is just restriction of freedom — not jail time — or is negotiated down to a stint at community service.

In addition, the report documented extensive evidence of widespread fraud by both private and commercial breeders in Brazil who forged permits, mislabeled species declarations, and tampered with government-issued identification rings to sell illegally-acquired songbirds alongside those they legally breed. This particular market is largely domestic, feeding an entrenched Brazilian culture that keeps songbirds as pets. IBAMA, Brazil’s environmental agency, estimated that in 2015 alone, some three million passerine birds were fraudulently listed with the government — 75% of all that were registered.

While the goal of the new report was not to make a comprehensive assessment of the international trade, the authors found that foreign buyers are driving much of it. “It seems that some Asian countries are sourcing more species in Brazil, such as sea cucumber, sea horses, ornamental fish, jaguars and shark fin,” Ferreira said, adding that the U.S. is a top consumer of ornamental fish and leather made from pirarucu skin. Birds, amphibians and reptiles typically sell to European collectors, and the Middle East is a market for Amazon raptors.

Digital commerce — the internet, social media and messaging groups — have become key “sales offices” for wild animals and the products made from them. The “merchandise” itself is moved in every way imaginable: via cars, buses, boats, planes and overnight courier services. Human “mules” have been arrested with birds or eggs taped to their bodies or concealed in clothing. A porous, 8,000-mile border between Brazil and eight Amazon neighbors creates an easy flow. The Peruvian and Colombian borders in the Northwestern Amazon form a “particularly relevant hub” for trafficking, the report noted.

Combatting the trade requires that it be recognized and treated as a serious crime. More complete data is also needed that will allow for strategic planning and strengthened law enforcement, says lead author Sandra Charity. Stronger national laws that target professional traffickers would also allow for the implementation of the UN Convention on Organized Crime, she said.

Without a market, there is no commerce, so educating consumers is key, concludes Ferreira.

“Ultimately, it is a matter of choosing why we are buying that animal, or wildlife product, and if it is worth it …. Cultures are dynamic and need to evolve. We need to start to change the way we view wildlife as commodities,” she said, and “we also need to understand that loving an animal does equal imprisoning them.”