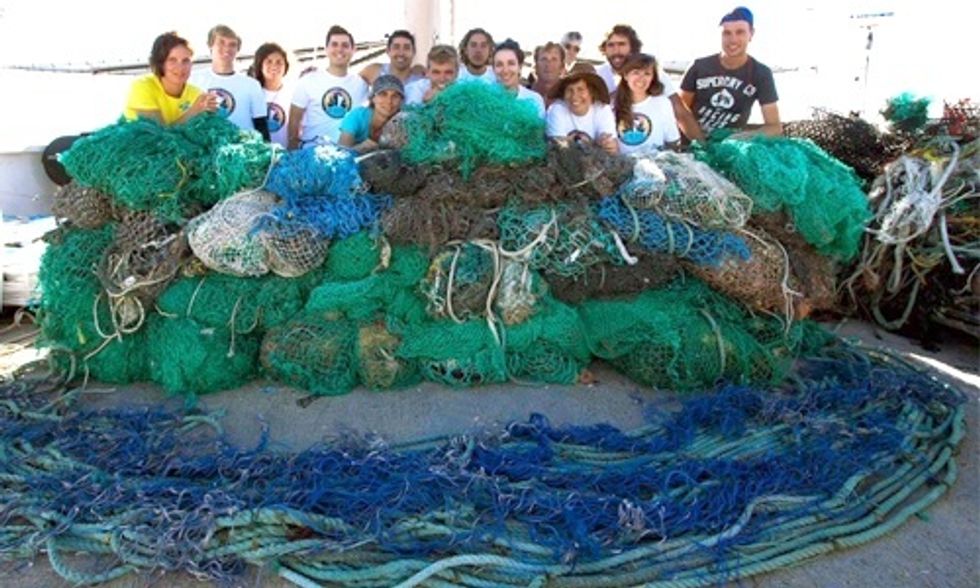 A few years ago, when then-17-year-old Boyan Slat claimed he could rid the world's oceans of plastic, many thought it was just a nice idea. But flash forward four years and what appeared to be merely youthful idealism has turned into concrete action. Yesterday, Slat's nonprofit The Ocean Cleanup returned from a 30-day voyage through the Great Pacific Garbage Patch.

Congratulations @BoyanSlat on arriving with the great expedition in San Francisco! Thank you for cleaning our oceans. pic.twitter.com/sQIxqJir8o

The team was on a reconnaissance mission to determine just how much plastic is floating in the Great Pacific Garbage Patch, "a swirling mass of human-linked debris spanning hundreds of miles of open sea where plastic outnumbers organisms by factors in the hundreds."

The researchers collected samples ranging from microscopic to as large as a 2,000-pound fishing net in what the group claims is "the largest ocean research expedition in history." Using a series of measurement techniques, including trawls and aerial surveys, the fleet of close to 30 vessels sampled the concentration of plastic—all in preparation for the largest clean up of the area set to begin in 2020.

The team's findings confirm the well-documented fact that our oceans are riddled with plastic.

“I’ve studied plastic in all the world’s oceans, but never seen any area as polluted as the Great Pacific Garbage Patch,” Dr. Julia Reisser, lead oceanographer at The Ocean Cleanup, said.

“With every trawl we completed, thousands of miles from land, we just found lots and lots of plastic.” In so-called "hot spots" of the garbage patch, "there were hundreds of times more plastics ... than there were organisms," Reisser told Reuters.

Although the samples collected during the expedition still have to be analyzed, preliminary findings indicate a higher-than-expected volume of large plastic objects floating in the ocean.

We caught this monster ghost net in one of our trawls earlier this week #MegaExpedition pic.twitter.com/FwRDBi6UPc

“The vast majority of the plastic in the garbage patch is currently locked up in large pieces of debris, but UV light is breaking it down into much more dangerous microplastics, vastly increasing the amount of microplastics over the next few decades if we don’t clean it up," says Slat. "It really is a ticking time bomb.”

The next phase begins in 2016 when the team will test out a one-mile barrier of its ocean-cleaning system near Japan. The system will contain "floating stationary booms tethered to the ocean floor and linked in a V shape intended to skim and concentrate surface plastics floating on top of ocean currents," according to Reuters. Ultimately, Slat's goal is to develop a 60-mile barrier in the middle of the Pacific.

Using a series of measurement techniques, including trawls and aerial surveys, the fleet of close to 30 vessels sampled the concentration of plastic during its month-long voyage through the Great Pacific Garbage Patch. Photo credit: The Ocean Cleanup

Some have criticized the effort as being too costly and ineffective, but one of the project's financial backers, Salesforce chairman, CEO and founder Marc Benioff had this to say: "Protecting the oceans should be a priority for all of Earth's citizens. The Ocean Cleanup is taking an innovative approach to preserving one of our most critical resources and raising visibility of this global challenge."

The World’s Oceans Are in Peril