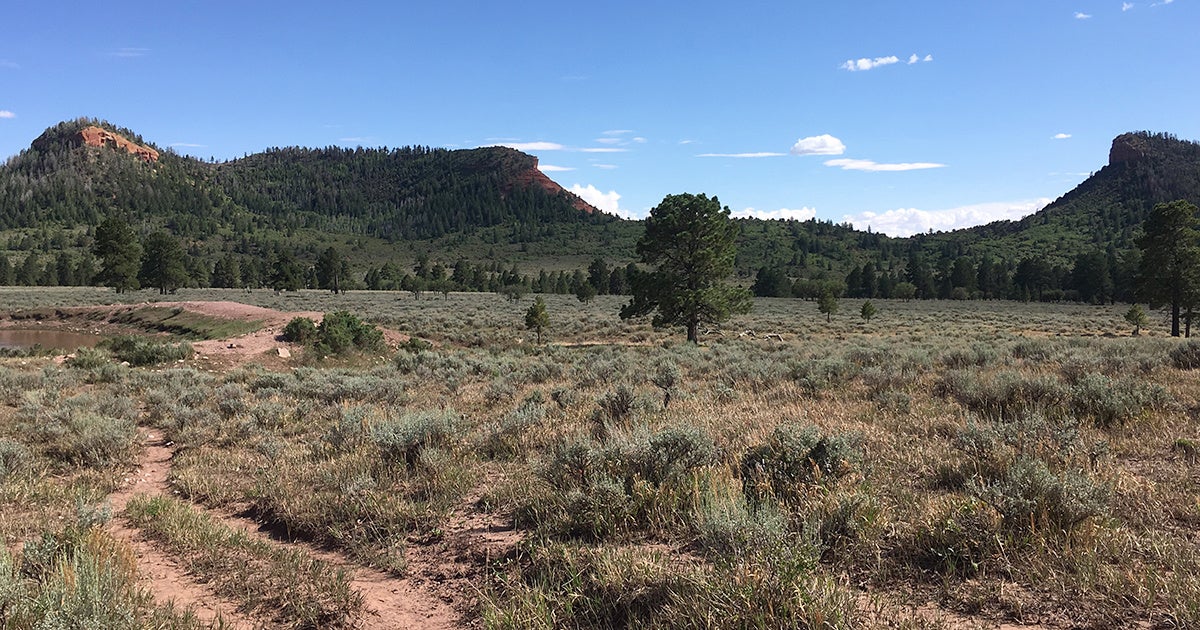 I am sitting near the top of the eastern ear, or rather the eastern earlobe, of Bears Ears, the redock buttes that give our most controversial national monument its name. From up here I can look back on my starting point, the meadow far below and two miles north where a big white tent marks the social center for the reunion of five Native American tribes during the fourth annual Bears Ears Summer Gathering. Hundreds of Indigenous people, environmental organizers, and members of the media like me make up the first meeting of this sort since President Trump and Interior Secretary Ryan Zinke announced, last December, that they were going to reduce Bears Ears by 85 percent.

Although this July celebration is taking place legally on public land—land that is still, despite the reduction of a million acres around it, a national monument—the event hasn’t exactly been greeted with open arms by the local white ranchers. In fact, as one young Navajo man put it earlier, it feels a little like we are under siege.

“You look like an environmentalist. Get back in your truck!” This was the greeting one of my fellow celebrants got from one area resident when he stopped to check how deep his back tire had sunk in the muck. Other cars had been tailgated as they made the drive to the celebration. Someone moved the signs for the event so that many of the attendees—and the porta-potties—ended up in the wrong place. The ribbon that marked the pull-off for the road to the gathering was stolen. The Native American organizers responded by placing volunteers on the roads at each turn to make sure guests weren’t being misled. Not long ago a private plane buzzed low over our campsite.

“You can tell how special a place is by how many people try to keep you away from it,” Navajo elder Jonah Yellowman told me soon after I arrived. I saw what he meant during my hike up here. After lunch these matching buttes looked like an open invitation, and since we were on monument land, I assumed I could walk directly toward them. But barbed-wire fences and grazing cows cut off most of the access, siphoning me to the single point where I could open a gate, scramble up a gully to the public road, and finally get to the base of the eastern butte. Then I climbed to the spot where I sit now. But even then the fence followed me. In a strange marriage of redrock and barbed wire, of public and private, the fence continues right up to where the rock turns vertical, a place no cow could climb.

It feels odd to be fenced in on land that even Donald Trump and Ryan Zinke admit is still a national monument. Public lands are said to belong to all of us, but hiking here, I have experienced the anxiety of the intruder. Looking out at hundreds of miles of land and a half-full moon through an opening in a fence, I am in a fought-over spot in this fought-over landscape in our fought-over country. Maybe this place embodies our world right now. All the battles between red and blue, future and past, are being fought right here, at this point where redrock meets barbed wire and where Native peoples celebrate while white ranchers resentfully prowl the outskirts.

On the hike back, I think of a statistic I recently read: Over a third of the land in the contiguous United States is pasture land, with a quarter of that being land leased by the government, and that almost all of that land serves the cow. I am very careful to reattach the wire loop that secures the gate that leads back to the meadow. Just last week saw the beginning of the trial of environmental activist Rose Chilcoat and her husband, Mark Franklin, in what some of us are choosing to call Gate-gate. Chilcoat was a former director of the environmental group the Great Old Broads for Wilderness, and she and her husband are accused of closing a gate on a rancher’s property that denied his cows access to a watering hole. This is just the sort of battle that makes San Juan County seem both uniquely quirky and a microcosm for the rest of the country. Here the wars never stop raging between environmentalists and those who resent federal intrusion, and between Native people and locals.

But who are the real locals? Over 50 percent of the residents of San Juan County are Indigenous people and, if the recent primary election is any indicator, two out of the three San Juan County commissioner seats could go to Navajos. Meanwhile “local” Zane Odell, one of the most vociferous opponents of Bears Ears, is actually a Colorado resident. As for the land I am now walking through, it was once the childhood romping grounds of the great Navajo chief Manuelito. He used Bears Ears in the 1860s to hide out from the U.S. Army but then gave himself up to join his people and care for the children and elderly during the Long Walk, the forced eviction and march of Navajos to Fort Sumner in New Mexico. And the Navajos are not alone in seeing this land as a homeland. The Ute traditional territory encompasses Bears Ears, and the Ancestral Puebloan people, including the Hopis and Zunis, don’t have to look hard to see clear evidence that this was once their home. That evidence still inhabits the landscape in the form of the plentiful ancient dwellings and artifacts.

“Chief Manuelito wanted peace, but he was ready to fight,” Kenneth Maryboy, a Navajo member who is the current Democratic nominee for one of the three county commissioner seats, is now telling a few dozen of us who are gathered under the huge tent. “Manuelito said, ‘There is a day when my enemy is going to kill me. But I’m not going to go quietly. Trees and rocks will be ripped up around me. I will take many with me before I go.'”

Perhaps Maryboy is in a fighting mood, having just won the primary for a commissioner seat over Rebecca Benally, who stood next to Trump when he announced the Bears Ears reduction in Salt Lake City last February.

Maryboy’s words are inspiring, but they are one of the few aggressive notes during the weekend gathering. The theme of this year’s celebration is “Bears Ears Is Healing” and that seems to be happening. A couple hundred of us are camping here, and it’s the most social camping I’ve ever done. Each morning a color guard made up of veterans raises the U.S. flag. We then greet the sunset near the Bear Totem Pole that was carved and brought here as a gift of goodwill and support from the Lummi Nation of Washington State. Then everyone goes in search of coffee in the kitchen tent. All three days, the weather is perfect, and violet morning light plays off of Bears Ears, with its rich, almost edible, red-orange colors shining out from below the green of ponderosa and piñon pines. Mountain bluebirds and cliff swallows shoot from tree to tree in the meadow below the ears.

William Greyeyes, the board chairman of the Utah Diné Bikéyah and one of the original leaders in the struggle to establish Bears Ears, tells me that the lack of local hospitality is nothing new.

“This has happened in past years too,” he says. “We just ignored them and re-established our path and kept going forward. That’s the only way to do it. These are public lands, federal public lands. It’s open to everybody. And they are welcome to put forward a proposal to the United States government. Just as we did.”

And so the weekend continues peacefully, including prayer, medicinal plant walks, programs for kids, the dedication of the bear totem, a 5K run, and more mutton than I have ever eaten in my life. By the end of the second day, the anger from the locals has died down and the mood of the gathering is buoyant. Speakers remind us of what was gained, what still is, and what might be again. Of possibilities, not loss.

On Saturday night, the final night of the gathering, I decide to pack it in early after a delicious dinner of bison and beans. Too tired for any more interviews, I stumble back to my tent. But then, lying there, I hear the music. And then a voice over the microphone. The voice belongs to Regina Lopez-Whiteskunk, the former councilwoman for the Ute Mountain Ute on the Bears Ears Inter-Tribal Coalition. Lopez-Whiteskunk was the first person to tell me the Bears Ears story, back in January, and soon I am climbing out of my sleeping bag and heading back to the big white tent. Lopez-Whiteskunk, dressed in traditional Ute clothing, is dancing to music played by her father and other family members. Her granddaughters, also in traditional dress, sit on the stage and whisper to each other. I join along with everyone else in the final dance, a great snaking circle that turns inward on itself and tightens until we are one great, knotted ball. The dance ends in laughter and applause.

After the dancing, Lopez-Whiteskunk talks to the crowd. Her theme is how to deal with Trump’s assault on Bears Ears, and the aggressive opposition the tribes face.

“This is not new for us,” she says calmly. “We are used to this. We will adapt.”

She reminds us of what has already been accomplished.

“We did it. Yes, they are trying to take it away. But we did it. Remember that.”

I like her calm. It soothes. But I also remember Kenneth Maryboy’s sterner message.

We talk, we plan, we teach, we learn, we celebrate, we dance. We try to heal.
But, if necessary, we fight. Like Manuelito, we won’t go quietly.
We will fight, and trees and rocks will be ripped up around us . . .