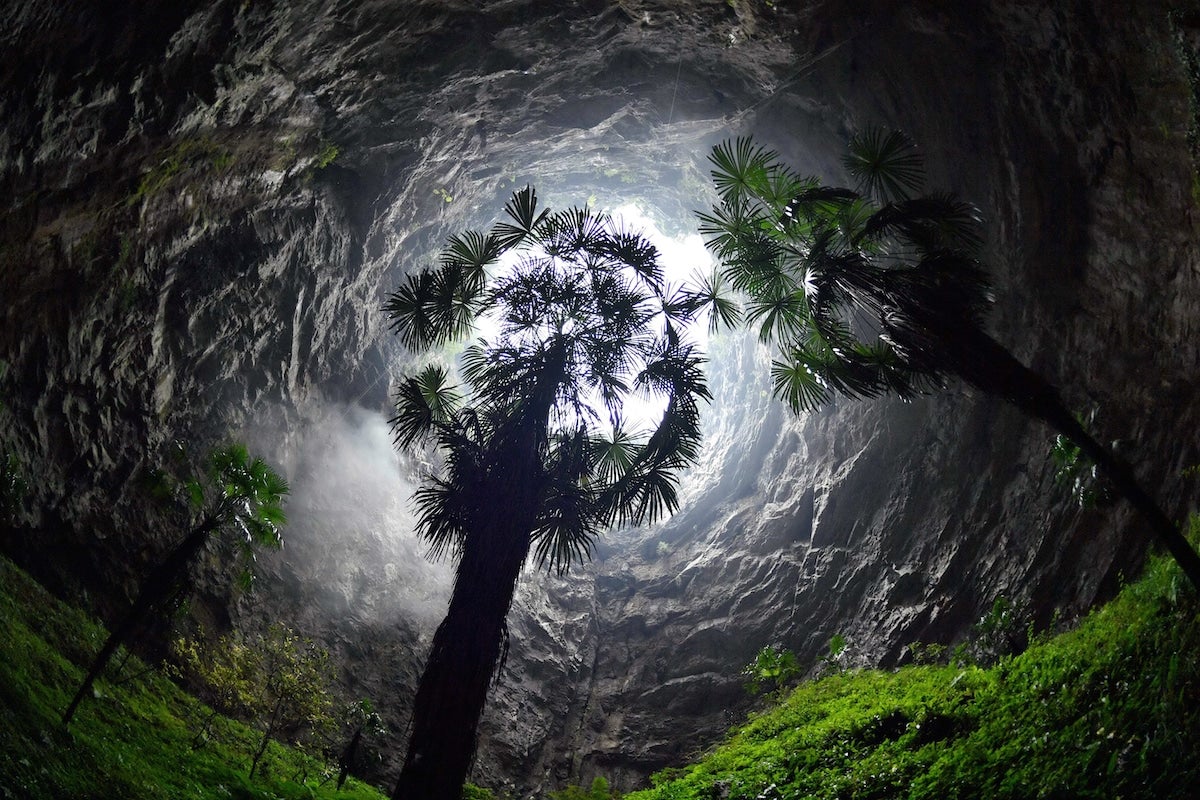 Palm trees growing out of another giant sinkhole in China’s Hubei Province in 2020. Song Wen / Xinhua via Getty Images

At the bottom of a 630-foot sinkhole in China lies a green surprise: an ancient forest with trees stretching nearly 130 feet out of the depths.

The unusual sinkhole was first discovered by cave explorers in China’s southern Guangxi region, who alerted scientists to their find, according to The Guardian. After confirming the forest’s existence, researchers think it has even more secrets to reveal.

“I wouldn’t be surprised to know that there are species found in these caves that have never been reported or described by science until now,” expedition leader Chen Lixin said, as The Guardian reported.

Lixin’s team completed their expedition on May 6, USA TODAY reported. In addition to the trees, they also encountered undergrowth that reached their shoulders. The sinkhole contains three caves and has a total volume of 5 million cubic meters, meaning it would take 2,000 Olympic swimming pools to fill it. It is 1,000 feet long and 500 feet wide. It is also the 30th sinkhole found in China’s Leye county, according to China’s state-run Xinhua news agency. It was found near the village of Ping’e in Luoxi township.

Known as “tiankeng,” or “heavenly pits” in China, giant sinkholes are common in this portion of the country, The Washington Post reported. It is a karst landscape, which is a landscape formed when rainwater mixes with carbon dioxide and wears away at bedrock, National Cave and Karst Research Institute (NCKRI) executive director George Veni told Live Science.

“Because of local differences in geology, climate and other factors, the way karst appears at the surface can be dramatically different,” Veni, who was not a part of the exploration, told Live Science. “So in China you have this incredibly visually spectacular karst with enormous sinkholes and giant cave entrances and so forth. In other parts of the world you walk out on the karst and you really don’t notice anything. Sinkholes might be quite subdued, only a meter or two in diameter. Cave entrances might be very small, so you have to squeeze your way into them.”

Veni said the presence of the ancient forest was not necessarily surprising.

“It’s not unusual to have trees growing out of cave entrances,” he told The Washington Post. “It’s just that this [sinkhole] is particularly large and particularly deep, so it’s not the sort of thing that most people would expect.”

Still, he acknowledged to Live Science, “This is cool news.”