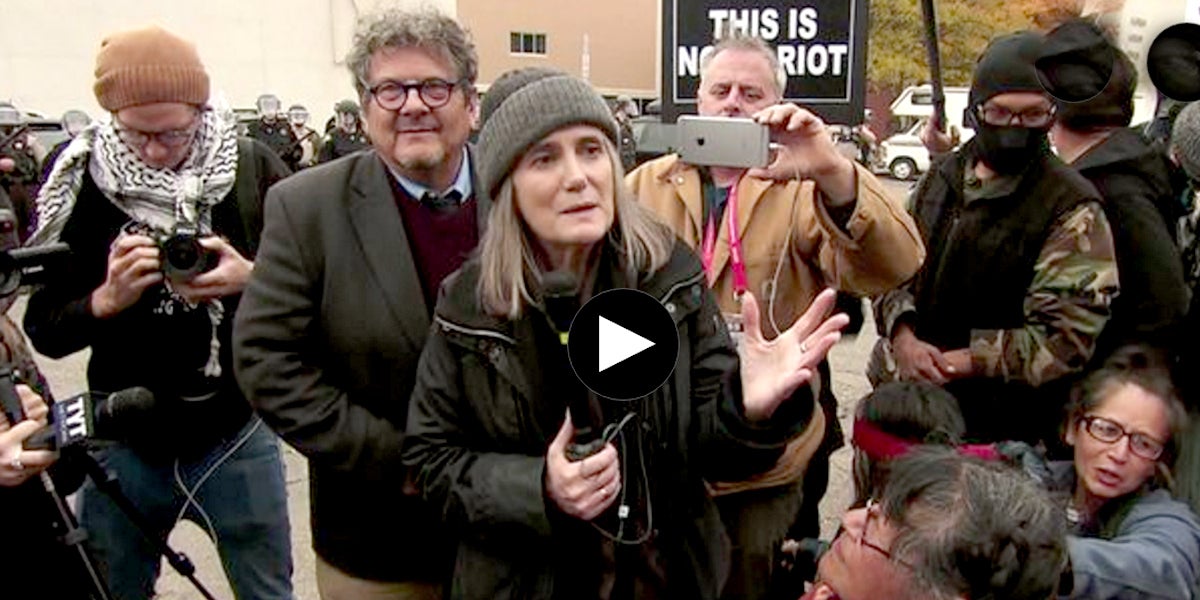 A North Dakota judge today refused to authorize riot charges against award-winning journalist Amy Goodman for her reporting on an attack against Native American-led anti-pipeline protesters.

“This is a complete vindication of my right as a journalist to cover the attack on the protesters, and of the public’s right to know what is happening with the Dakota Access Pipeline,” said Goodman. “We will continue to report on this epic struggle of Native Americans and their non-Native allies taking on the fossil fuel industry and an increasingly militarized police in this time when climate change threatens the planet.”

District Judge John Grinsteiner did not find probable cause to justify the charges filed on Friday, Oct. 14 by State’s Attorney Ladd R Erickson. Those charges were presented after Erickson had withdrawn an earlier charge against Goodman of criminal trespass. Goodman had returned to North Dakota to turn herself in to the trespassing charge.

The charges in State of North Dakota v. Amy Goodman, stemmed from Democracy Now!’s coverage of protests against the Dakota Access Pipeline. On Saturday, Sept. 3, Democracy Now! filmed security guards working for the pipeline company attacking protesters. The report showed guards unleashing dogs and using pepper spray and featured people with bite injuries and a dog with blood dripping from its mouth and nose.

Democracy Now!’s report went viral online and was viewed more than 14 million times on Facebook and was rebroadcast on many outlets, including CBS, NBC,NPR, CNN, MSNBCand the Huffington Post.

On Sept. 8, a criminal complaint and warrant was issued for Goodman’s arrest on the trespassing charge.

“These shifting charges were a transparent attempt by the prosecutor to intimidate Amy Goodman and to silence coverage of the resistance to the pipeline,” said Reed Brody, an attorney for Goodman. “Fortunately, these bully tactics didn’t work and freedom of the press has prevailed.”

The pipeline project has faced months of resistance from the Standing Rock Sioux tribe and members of more than 100 other tribes from across the U.S., Canada and Latin America.

Goodman is the host and executive producer of Democracy Now!, a national, daily, independent, award-winning public television/radio news program that airs on over 1,400 stations worldwide. Goodman has co-authored six New York Times bestsellers and won many of journalism’s highest awards in more than three-decades working as a reporter.