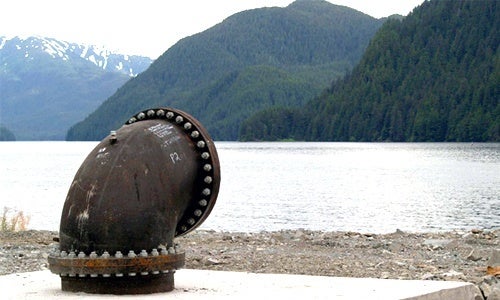 An entrepreneur attempting to pioneer the shipment of large volumes of water from an Alaskan town to thirsty global markets claims his company is a step closer after signing a contract to deliver 10 million gallons per month to a buyer in dry California. 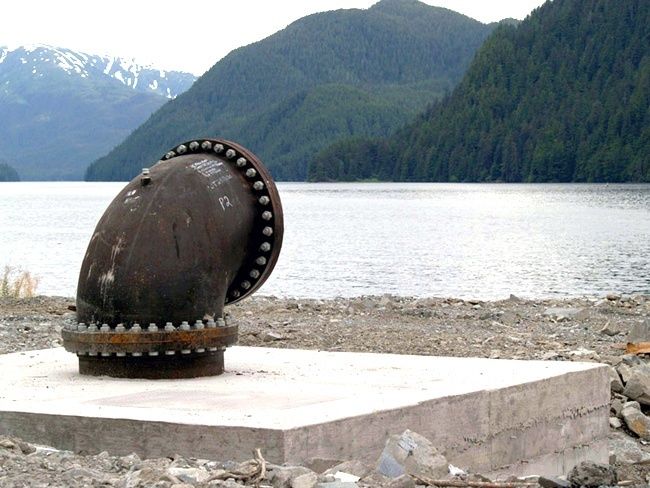 A 36-inch-diameter pipeline connects Sitka’s Blue Lake to Silver Bay. Alaska Bulk Water Inc., which hopes to ship water to thirsty markets, is fashioning a mooring system to connect the pipe to a tanker loading facility in the harbor. Photo credit: Don Kluting

Terry Trapp, chief executive of Alaska Bulk Water Inc., announced the deal in a March 25 letter to officials in Sitka, an island town of 9,000 people, which has offered to sell surplus water from a reservoir also used for hydroelectric power generation. Alaska Bulk Water’s goal is to ship water by tanker or barge by July, according to the letter.

After working with the company and its predecessors for nearly a decade and seeing numerous delays, cancellations, and contracts that were not fulfilled, Sitka officials are both skeptical and hopeful that the deal comes to fruition.

“They have told us for years that they have contracts signed, but that does not mean we’ve shipped any water,” Garry White told Circle of Blue. White is the executive director of Gary Paxton Industrial Park, which manages Sitka’s bulk water agreements. “Moving water is the true test of whether this happens,” he added.

Trapp would not discuss the details of the contract or the business operation with Circle of Blue, saying only that the company is working out the economics and logistics of the water trade.

“We’re trying to haul water from Alaska to California, and we’re looking for the most cost-efficient way to get that done,” Trapp said.

Cost has always been a primary obstacle for bulk water. Premium products such as the angular bottles from Fiji sell for hundreds of times the price of tap water. But bulk water is sold in large volumes, not in single-serving bottles.

Sitka is offering water from Blue Lake for one penny per gallon, which is much higher than what municipal water costs in most American cities. Nestle Waters North America, for instance pays Sacramento, California, one-tenth of a cent per gallon for its 50-million-gallon-per-year bottling plant. Alaska Bulk Water must pay Sitka for the raw product, then add the dollars needed to lease a tanker ship, plus the cost of fuel and loading facilities. The price quickly becomes uncompetitive.

These are not normal times in California, however. With the state in the fourth year of a drought emergency, a stop-gap solution such as tankers full of water might be attractive for a desperately dry coastal town. The Catalonia region of Spain, for instance, purchased tankers of water from France during a drought in 2008 as an interim measure until a desalination plant came online. That same year, Cyprus bought water from Greece and ferried it across the Mediterranean Sea.

Ten million gallons in the California contract could be a significant source of water for a small community. It equals one-quarter of the monthly summer use of Morro Bay, California, a coastal town of 10,000 people.

But without more details about the Alaska Bulk Water contract, it is difficult to assess the likelihood of a deal being completed. Neither White nor Mark Gorman, Sitka’s municipal administrator, has seen the contract that Trapp announced in his letter, they told Circle of Blue.

Gorman, nonetheless, sees evidence that Alaska Bulk Water is serious about breaking open this market. The company will lose a $1 million down payment if it does not move at least 50 million gallons by December 8. Before any shipments take place, the company must connect a 36-inch-diameter pipeline from Blue Lake to a tanker-loading facility in the middle of the harbor. The pipeline currently ends at the shore. White said that he has seen Alaska Bulk Water’s construction permit that was issued by the Army Corps of Engineers for a floating mooring system.

“Alaska Bulk Water is putting real money in the game now, so that is an indication that the deal will go through,” Gorman told Circle of Blue.

City officials are eager for the results. “It would be great for us,” White said about selling water to the world. “We’re up here in the middle of nowhere with a limited ability to earn revenue. Water is one resource we have in abundance that we can leverage to fund the city government.”